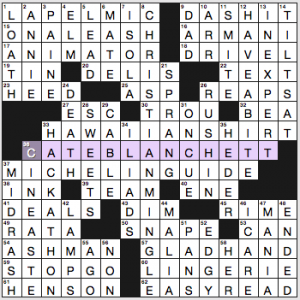 Easy for a Saturday, no? I’m surprised the puzzle didn’t take me longer to finish, given the amount of food I have eaten since sundown at a neighborhood iftar. The food was catered by a Kyrgyz restaurant called Jibek Jolu, and I can attest that the chicken Samsy, Tandyr Okorochka, lentil soup, assorted breads, and honey cake were delicious. Ramadan Mubarak to the crossword world’s Muslims!

Back to the Paolo’s 68-worder. When I see his byline, I expect to see plenty of zippy fill. To wit: LAPEL MIC, HAWAIIAN SHIRT, CATE BLANCHETT, MICHELIN GUIDE, GLAD-HAND, an EASY READ, HACKATHON (my company has an annual hackathon and I participated one time despite not being a coder), CHRISTIAN MINGLE, and INEXPERT.

In a piece of correspondence, the postscript comes at the end and is indicated by the initialism P.S. Appropriately, PS has been added at the endS of various phrases to come up with today’s wacky theme entries. 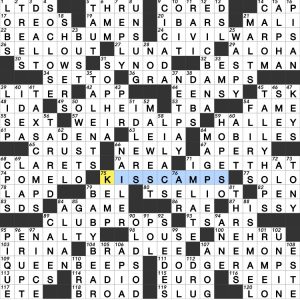 I’ll be honest. Most of these seemed rather lackluster with nary a chuckle in sight. Ten theme entries is quite a lot. I would much rather see this number pared down if it meant higher quality entries.

Fill looks to be quite good though I admit to being mostly on auto-pilot during the solve. I liked BABY BEAR, ISHMAEL, CICADA, MAE WEST, ANEMONE, BEST MAN, T.S. ELIOT, etc. Did not know SOLHEIM [___ Cup (biennial women’s golf tournament] nor BRADLEE [Editor played by Hanks in “The Post”].

Three stars from me. I’m spending the weekend visiting family, so I’m going to cut this short here. Please have a safe and enjoyable weekend and spare at least a thought for those who made incredible sacrifices in service to our country. 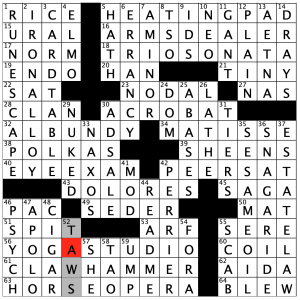 I tried this one Downs Only again, like last Saturday, and again I had my soul crushed. Actually, I think I could have gotten this one, but there are deadlines at play here. Solving this totally cold would still have played around the 5 minute mark, even though this is slightly tough. I will say, though, that the Downs Only training is improving my solving quite a bit. The true acid test will be next year in Stamford, but so far I can tell a change. I still cannot solve a NYT Saturday in 4 minutes like some of these people, but it is getting faster.

There are a couple of great across entries in here that are hard to get without the clues, and again I will keep a keen eye out for a Twitch stream of this solve. I will highlight some of these in the notes below, but a great puzzle by Daniel this weekend. A solid 4.4 stars from me.

I will definitely try to get back to a Downs Only next Saturday! Perhaps I should start on it ASAP … 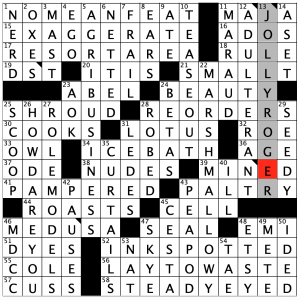 I thought these were easier on holiday weekends! I struggled mightily with this one. Maybe I am remembering it wrong: maybe the long weekend is thought of as extra time to muse over a toughie! At any rate, this is a nice 70-word grid with 10 letter entries all over the place. Not too many error marks in this grid, which solving-wise went like a hard sudoku puzzle: smooth sailing at first, then I hit a chokepoint, and then more smooth sailing until one last a-ha moment at the end. On a side note, I have been solving more sudoku recently, as I need to hone my logic skills. Watch me STILL get Alzheimer’s anyway. 4.6 stars for another Stumper gem.

Enjoy your holiday, everyone!

THEME: Celebrity names, clued as if they’re not names

The first theme answer I found was WILL SMITH, and I was looking forward to the rest since that one was fun to uncover. But yeesh… WILL SMITH was born in 1968, and he’s the youngest of all the themed names. GALE STORM was entirely unfamiliar to me, and both ROBIN GIVENS and HOLLY HUNTER– while notable names- aren’t ones I hear all that often. So the whole thing felt… old.

59D tried to give it a modern feel: [Like an awesome party] LIT. But even that word is now leaving the vernacular, going the way of PHAT in the 90’s.

I typically like Gary Larson puzzles, but I’d call this A DULL one.