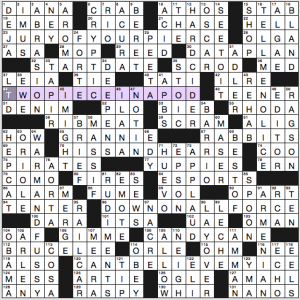 What a fun theme! It’s always a treat to have a Sunday theme that brings amusement in more than one of the entries. Here, “Buzz Cut” means to cut the buzzy “Z” sound down to an unvoiced “S” sound, tweaking spelling as needed to create new words. The resulting silly phrase is clued accordingly:

There’s some crusty fill in the mix—IL RE, TEENER, TENTER, ORLE crossing NACRE, discontinued NANOS (constructors, it’s past time to remove that plural from your wordlists), NAY, EDY—but overall the puzzle wasn’t a slog because I was enjoying the theme, long fill, and some clues.

MAS- mysteries: 60d. [Atomic clock timekeeper], a MASER (did not know this), and 58d. [Group of mountains], MASSIF (I thought a massif was a single peak).

122d. [Country music’s ___ Young Band], ELI. If you don’t know the group, you’d probably be surprised to know it’s named after two of its members, Mike Eli and James Young.

+5 for the perfect 1-Across, [Mythical hunter]. How many of you filled in ORION first? The answer turned out to be the goddess DIANA, who also has three vowels with two common consonants. 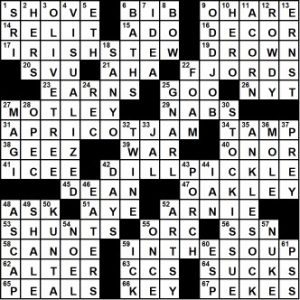 Hmm. As I think through this, let me set forth the theme and let it speak for itself. Reveal first:

I can be in hot water; in the soup; and/or in a stew, a jam, or a pickle. I don’t think of the five phrases involved here as synonymous, though I’d agree they share a vein. The clue for the reveal suggests synonymity (or does it?), aslo that soup or the soup is a “bad” place for stew, jam, or a pickle–the puzzle’s “starred ‘trouble foods’.” Hmm, maybe I’m overthinking this.

To be in the soup is to be “in trouble.” My first encounter with this phrase was someone telling me of a really bad medical diagnosis: “I’m in the soup, Vic.” I seem to recall learning at the time that it originated as an aeronautical term: A pilot was “in the soup” when the fog was so thick, she could not see far enough in front to fly safely. But I could not replicate that research this morning.

In hot water puts me in mind of situations such as breaking curfew or forgetting an event or occasion. “Oh no! Yesterday was Pat’s birthday. Boy, am I ever in hot water!”

In a stew means being worried, doesn’t it? Maybe even to the point of being angry? “Dad’s in a stew because cousin George is bringing his step-kids to the family reunion!”

I think of in a jam as referring to a predicament that threatens one’s ability to get things done on time, such as double-scheduling appointments or running late because of car trouble.

As for in a pickle,  I’d have to say that I think of it as being synonymous with in a jam. I think.

The sparkle here is that all of the themers–and the title, too, in a way, involve food. Literally.

Other items to like: OLIVE TREE (in an olive?), VISUALIZED, ODD JOB, STOCK ISSUE (this is not the stock from which soup is made), and ANKLE SOCK.

Another fun wordplay theme! I had no idea what was going on until I found the revealer, which created a very satisfying “aha” moment.

As the title suggests, something disappears from one set of theme answers and reappears in the answer to the right. 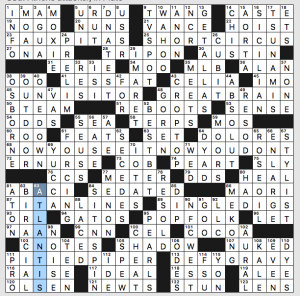 The revealer in the middle: 68a [Magic words … and a hint to four side-by-side pairs of puzzle answers] is NOW YOU SEE IT, NOW YOU DON’T, because IT vanishes and reappears. This is a feat of construction that is also a joy to solve. All the base phrases are solidly in the language and the altered answers are amusing. DEFY GRAVY is my favorite. A very enjoyable way to start Sunday!

What I didn’t know before I did this puzzle: that “cummberbund” is derived rom URDU, and that ATLANTIS attacked Athens, at least according to Plato.

The adventures of Captain Obvious continue! And this time, perhaps inspired by Game of Thrones, he finds himself in feudal times. 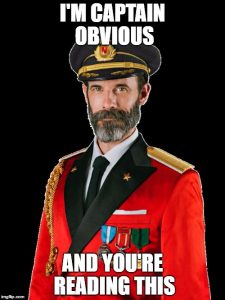 If you’re new to Captain Obvious, he’s a groaner of a character- reimagining (or perhaps “unimagining”) phrases in the most literal sense. I love these puzzles and the eye-rolls they induce. We saw him go camping and take a trip to the ballpark last year. Prior to that he went to the zoo and visited the theater. He first stopped by crosswords in 2016 with Part I and Part II of what was to be a recurring cameo. Am I missing any?

All of these answers landed for me, especially CASTLES IN THE AIR as clued and SCREAM QUEEN.

Fill and cluing was clean and mostly fresh, as per usual. I had never heard of “Toonces the Driving Cat” so of course I wound up watching several clips on YouTube. Enjoy.

This one’s all Greek to me! And… erm… Latin.

THEME: Words with both Greek and Latin etymology

Oh man. I appreciate that there are thirteen theme answers here and a lot of research must’ve went into coming up with a coherent set. But I just don’t care about the nature of the etymology of these words. Essentially, the puzzle works as a themeless with some very stodgy answers. I don’t mean to sound grumpy two days in a row about the Universal- but this is another one I didn’t care for at all (though I much prefer yesterday’s wordplay).

Ran into a snag after writing in MEGATON for GIGATON and refusing to change it for some time- if I weren’t signed up for blogging, I probably wouldn’t have bothered to suss it out.

Other fill that threw me was SIGILS (was sure I had a typo!), DISCMANS as a weird plural, and DUNLAP. The clue for DIABETIC struck me as strange mid-solve [Low on insulin, say], but in retrospect, I suppose it works as a loose substitution (“He’s low on insulin.” “He’s diabetic.”)

I’m sure some linguists out there got a kick out of this one.