No WSJ puzzle today due to the holiday.

Apparently this puzzle took me precisely the same amount of time as last Monday’s, which is amusing. The theme is straightforward and accessible, although I had no idea what it was until I finished solving, and one of the entries bugs me a bit. It’s a solid Monday puzzle. 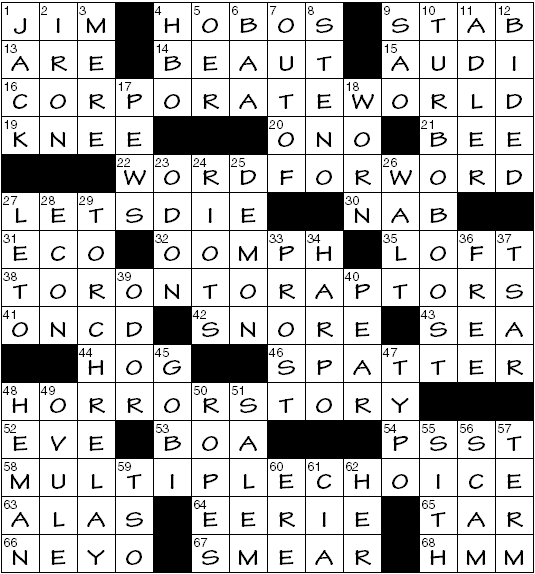 The repeated word is OR. You can see it without highlights, right?

What I didn’t know before I did this puzzle: that the planetarium in Chicago is the ADLER Planetarium.

It’s been unusually cold and rainy in LA lately, so this puzzle felt quite apt! 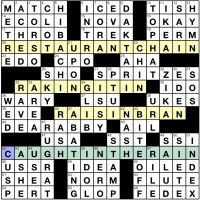 Nice, consistent theme with good theme density and in-the-language themers. I especially appreciate that each theme entry took a different form of being “CAUGHT” IN THE RAIN (R___AIN, RA___IN, RAI___N) and in a sequential order. I’ll take it! Now, if only the rain rain would go away in LA. : )

Random thoughts:
– TISH could be difficult or feel like crosswordese, but its clue in this puzzle makes it reasonable and totally passable.
– I had SSN instead of SSI for [Govt.-issued aid]. Is the clue off or am I not familiar enough with Social Security?
– I’ve honestly never heard of [’60s TV show …] DAKTARI. The show is described by Wikipedia as a drama about an American (read: white) family living in East Africa whose father-figure is a veterinarian. Was this a big show in the ’60s? Comment below if it was! 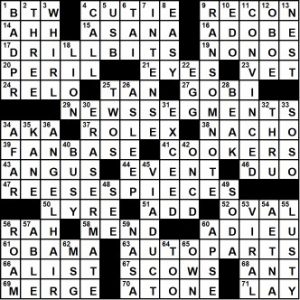 As phrases go, core elements  feels familiar to me. In quotes, it gets over 3,000,000 Google hits. Yet, as a phrase, it is not in the dictionary. So, is it an in-the-language stand-alone (ILSA)? I dunno.

At a certain website, I find a definition I can understand and, with a little adaptation, fashion a definition: Components of something that must be in their proper places (usually in a certain order) to accomplish some intended effect. Against that backdrop …,

DRILL BITS, NEWS SEGMENTS, REESE’S PIECES, and AUTO PARTS are ILSA’s. The clues for these answers are consistently theme-y:

In each clue, the letters are in alphabetical order. In each instance, all of the letters of the first words of the theme answers are mentioned. Each theme answer includes a synonym of components. The sense in which each of these synonyms is used in the ILSA’s mentioned above is different from the sense that would manifest in the context of core elements.

I was surprised to see the time when I finished the puzzle. It felt longer than six minutes – I would have guessed ten. There were a lot of spots where I had to stop and go somewhere else. Those of you who don’t like puzzles with proper names are not going to like this puzzle; neither are those who think The New Yorker puzzles are obscure triviafests. I enjoyed it a lot. 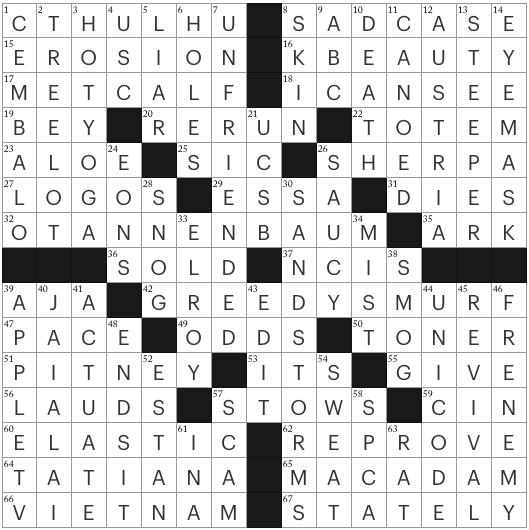 Part of the reason it felt like a long solve was the slow start. I didn’t know 1a [Lovecraftian entity know for its “call”] and I popped CLAVIER into 1d for [Harpsichord, by another name]. Then I saw 17a, [Laurie of “Lady Bird”] and I knew that was METCALF, so I had to take out CLAVIER  and I had no idea what to replace it with. Turns out it’s CEMBALO, and the Lovecraftian entity is CTHULHU, which I have heard of but did not realize was connected to Lovecraft. I also didn’t realize it had a “call.”

One objection: [Guide] for SHERPA. Yes, it’s a perfectly valid clue because SHERPA has come to mean “guide” in English, but the SHERPA are an indigenous people of Nepal who do not exist simply to guide other (primarily white) people who want to climb the Himalayas. I would have preferred to see the clue acknowledge them as a people.

What I didn’t know before I did this puzzle: see above re; CTHULU and CEMBALO. I’d never heard of the movie UNFRIENDED. I didn’t know there was an actress named TATIANA Maslany in “Orphan Black.” I was unaware of the [Cosmetic trend involving serums and essences], K BEAUTY (the K is for “Korean”). My father always said it was a good day if you learned something.

So many music choices to leave you with! I chose Queen Bey’s “Formation” from “Lemonade,” because if you haven’t seen it, you should.