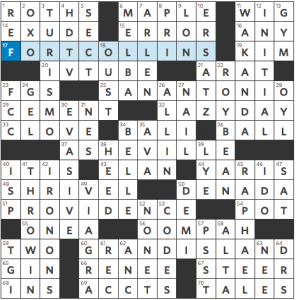 Really whiffed on this one at first. (“Whiffed” means “failed utterly,” right?) Saw the five cities in the longer themers —

— and tried a bunch of things like mapping them on a … uh, map, lining up re longitude and latitude, comparing location re rivers and other bodies of water and/or geographic features, yadda. No luck. Lined up the states in which our cities featured — CO, TX, NC, RI, NE — and found them represented elsewhere in the grid, which seemed promising until it went everywhere and nowhere. Flailed. Asked for a hint from solving pal Heather and received:

So the set follows a patter of either:

… which, given that our answer is a U.S. state capital that should be in this grid, but isn’t suggests that we’re likely looking for a state capital that is one word (CITY) in a state that is two words (STATE STATE). But how to find it? Here’s where it gets funny in my notes: 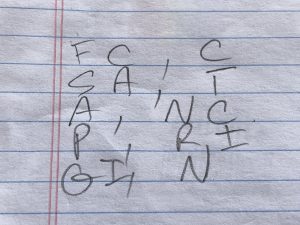 And there we have it:

I liked this one, despite its stumping me for far too long. You?