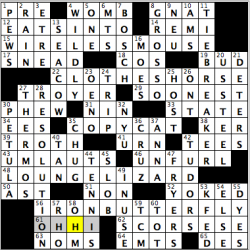 Hello there, people! Here is hoping that you all had a good holiday weekend. Today’s grid is a little fun time with animals, sort of. Common items and/or phrases that have the name of an animal inside of it are turned into puns, reimagined by its “spirit animal” cluing.

How many of you have made good on your New Year’s RESOLUTION(s) almost halfway through 2019 so far (28D: [Pledge made after January 1])? Can’t say that I am big in taking part in that ritual normally, though I liked seeing the word in the grid. Also liked seeing TIEBREAKER (11D: [Deadlock ender at Wimbledon]) and TENNIS, especially given that the French Open is underway and Wimbledon is right around the corner (44D: [Venus and Serena’s sport]). UMLAUTS (43A: [They’re spotted in Düsseldorf and Münster]) was also fun to see, though having it cross PETULA is making it hard for me not to have an earworm develop with her song in my head for the next few minutes (30D: [“Downtown” singer Clark]). Here is hoping people didn’t have too much trouble with K-FED, a.k.a. Kevin Federline, famous for about 30 seconds for his romantic relationship with Ms. Spears before their break-up and his complete flameout as a hip-hop artist (53D: [Britney’s ex, in tabloids]). Finally, THERMOS made me want to ask you all a question in forcing you down memory lane: If you had a lunchbox/thermos combination that you brought to school when you were younger, what was the artwork depicted on them (27D: [Lunchbox flask])? I had two growing up, one being a San Diego Chargers themed lunchbox (random for a NYC kid, I know) and a Transformers lunchbox set! Man, I wish I could find it and carry it out one last time, possible weird glances at my direction be damned! 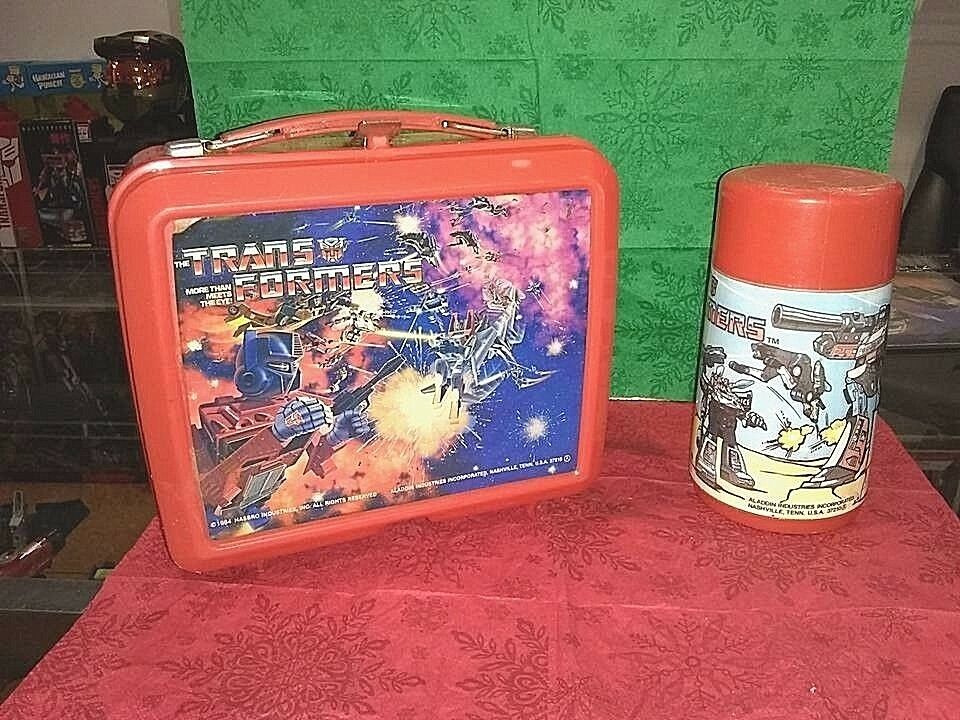 How could I not have been the coolest kid in third grade carrying this into the cafeteria?

“Sports will make you smarter” moment of the day: GROSSO (8D: [Concerto ______ (Baroque musical form)]) – There is a short list of men and women who have scored the game-winning goal at a FIFA World Cup Final and, in 2006, Italian defender Fabio GROSSO added his name to that list. After Italy and France ended 1-1 after regulation and after 30 minutes of added extra time, the game ended up being decided in a penalty shoot-out, which Italy won after converting all five of its penalties. The final penalty kick was converted by Grosso, who also scored the game-winner in the 119th minute in the semifinal game against World Cup host Germany. Here is how Grosso’s final kick of the 2006 World Cup final sounded on Italian television. “Campioni del mondo!!! Campioni del mondo!!!” 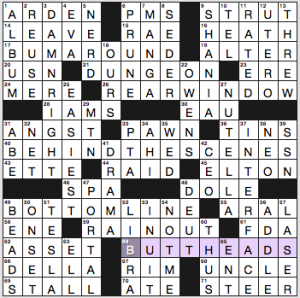 Sit right down for this theme:

Four stars from me. Smooth Tuesday puzzle that would be even smoother without ELL and ARAL.

Excuse the tardiness of this review – my husband and I moved this weekend (and went to a lot of “Points of Purchase” as we got settled into our new place). Let’s see what shops are in this puzzle: 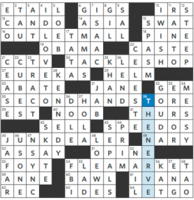 16A: OUTLET MALL [Place that really plugs its products?]
24A: TACKLE SHOP [Place catering to the left and right of center?] – Nice misdirect here! No political connection here.
35A: SECOND HAND STORE [Place that might help you on your watch?] – As in help with Paul Blart, Mall Cop’s watch?
45A: JUNK DEALER [Place whose products are on sail?]
54A: FLEA MARKET [Place to get a little bite?]

Puns, dad jokes, and misdirects, oh my! I’ll admit to groaning at a few of these themers (in a good way) as I solved. I appreciate that each of these is firmly in the language and uses a different meaning of the first word in each themer.

Loved seeing such fun women in the grid, especially expert puzzles solver and song writer extraordinaire Lisa LOEB, who I got to see in person a few months back when she helped solve one of Laura Braunstein’s puzzle on stage at a Zach Sherwin show! Also loved seeing [North Carolina’s first female senator] DOLE, CELESTE, Michelle OBAMA, KAT Dennings, and more! There were a lot of proper nouns I didn’t know and they were all bunched together (ISAAC GIL SAL), which made certain parts of the grid harder than I would have liked.

My biggest beef with this puzzle? 61A. To quote this puzzle, THE NERVE. I’m not here for normalizing 61A’s ex in any possible way.

A clue I was on the fence about / that felt purposely misleading: 14A’s [Home of the Indians]. Before I had the answer filled in, I was ready to get on a soapbox about use of the term Indian, especially if this was in relation to the sports team of the same name, but then the answer turned out to be ASIA and the clue is referring to residents of India. That’s better, except the clue seems too cute by half and the “the” in the clue makes it seem odd and purposefully misleading or meant to invoke the other (not great) uses of the term. 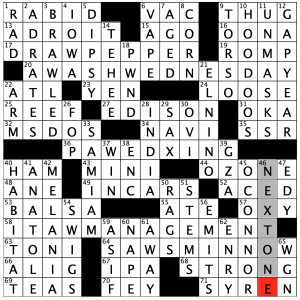 This one took me a little longer than normal, but it has been a stressful couple of weeks. The stress is thankfully over, so we are back to a routine of sorts. As the title suggests, the theme answers are “full” of “AW”!

I often wonder how the brainstorming process goes on some of these puzzles, and this one is certainly no exception. I have no idea how the seed of an idea gets planted, but to run with it to this puzzle seems like a fun journey. 4.4 stars from me today. 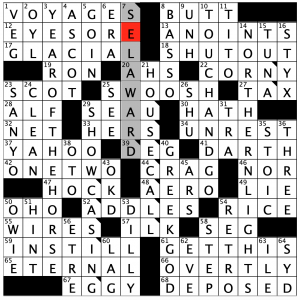 Back to Downs Only for this Tuesday puzzle, and it was not too horrible, given that the theme is in the Down answers!

So the theme is playing on some phrases that start with light: light year, light touch, lighthouse, and light show. And since they are going down, the descriptor “Northern” is appropriate. Nicely done. I probably would have finished this faster if I hadn’t had HOME VISIT at 21D. I’m too young to remember house calls! 4.3 stars for this one.

Some of the highlights (in the Downs, again!)

If you’re happy and you know it solve this crossword!

THEME: Phrases that end with a synonym for “happy.”

UP, GAY, CHIPPER, SUNNY, and SMILEY. All phrases are solidly in language and contain a HAPPY ENDING indeed. Though “UP” is possibly the weakest synonym of the bunch (followed by “GAY,” which very rarely means “happy” in modern use).

GUY SMILEY was a fun answer- one of those on-the-tip-of-the-tongue characters that you *thought* you forgot about.

Smooth fill overall. Really enjoyed LUCKY DOG– but I’m not so sure its symmetrical partner IN SHARDS is a thing.