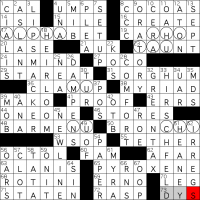 hello and welcome to episode #573 of matt gaffney’s weekly crossword contest, “Character Development”. for this week 4 puzzle, the instructions ask us to find a six-letter word that’s a group of characters. okay, what are the theme answers? i have no idea. there aren’t any particularly long answers in the grid, and nothing appears to be indicated as a theme answer except for {Group of characters} ALPHABET at 17-across. the longest answers are a pair of 10-letter downs, {ChapStick competitor} LIPSMACKER (which i’ve never heard of) and {Al known for his newspaper illustrations} HIRSCHFELD. the latter suggests the possibility of looking for NINAs hidden in the grid, word search-style, but there aren’t any.

i suppose the next thing suggested is to look for something related to ALPHABETs. other than our own, the most likely candidate alphabet (in the sense that the letters and their names would be familiar to solvers) is the greek alphabet, and there are in fact six across entries that hide greek letters:

it’d be great if those letters spelled something, but APTMNX/ARTMNC isn’t a word in either english or greek. this feels significant because there are exactly six, and because they all appear in across answers, but this doesn’t seem like it can be the entire theme, because it’s a very small amount of theme material, and doesn’t explain why there is a 78-word grid with large amounts of grid far from any theme answer.

oh, wait, i see it. if you replace each greek letter by its letter, you get a new entry that can answer a different clue in the grid!

taking the first letters of those other answers gives C?ORUS, so hmm, apparently the missing answer starts with H. oh, i see it now. i’m replacing RHO not with R but with P, because that’s what a capital rho looks like. (for the other five letters, the latin letter it resembles and the letter it is equivalent to are the same.) so the relevant word is CAPP, which goes with {Al known for his newspaper illustrations} HIRSCHFELD. anyway, the answer is CHORUS, which is indeed a group of characters, especially in the context of a greek chorus. well done.

that’s quite a brilliant meta. it can’t have been easy to find that many words where you could replace the name of a greek letter with the letter itself and still have it spell something substantively different. not only that, but the grid was further constrained because you couldn’t have a stray PI or ETA contained in any of the entries. (the others feel less likely to crop up by accident, although PHI, PSI, and perhaps XI are at least plausible.)

hope to see many of you this weekend at the indie 500!