It’s Wednesday folks, and I guess that means no added hints (i.e. circles) in the grid. Did you figure out the theme without them? As for me, it took a couple of minutes after I started writing up this post before I caught on.

The MISSING LINK is our revealer today, clued as [Hypothetical human ancestor, or what connects the two words of each starred answer].

My first thought was a literal one; that is, that the word “link” should be inserted between the words. But “mango link” and “link nectar” make no sense. My second thought was to do the same thing with the word “missing,” but clearly that was even worse.

Finally, I took a closer look at the letters spanning each pair of words. Therein lies the answer. Each term hides a synonym of “missing.” 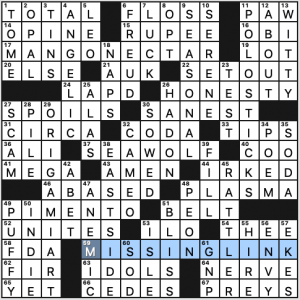 This was clever and fun—much more fun than if the answer was handed to you with circles. I especially like the inclusion of the two military acronyms which I think have gained wide enough acceptance to become general knowledge. And there are myriad ways of hiding the letters MIA, but only a few where the letters actually span two separate words. ORIGAMI ART might be on the verge of “green paintery”, but I think it’s the best, most interesting, choice. (There is a better one, SAM I AM, but sadly, it’s only six letters long.)

By the way, I like the revealer clue as well in that it doesn’t refer to monkeys or apes but a more accurate description of the term.

With the theme answers in a pinwheel configuration, there aren’t any marquee fill answers, but there are still plenty of fun entries: ANGELIC, RATTLER, HONESTY, PLASMA, EAST SIDE, SEASONAL, and PIMENTO which I wanted to spell PIMIENTO. (Apparently, both are acceptable.)

I don’t love seeing ILO [Worldwide workers’ agcy.] in a grid, but that is literally the only questionable entry I see. Very clean fill throughout.

A fun puzzle that still made me think after all was said and done. Four stars. 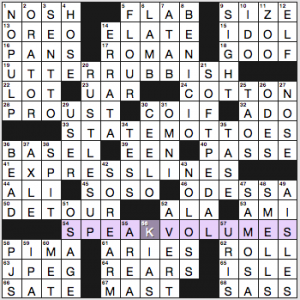 The theme is phrases whose first words also mean “talk,” basically (with one exception), clued as if the phrases mean something more literal. The theme’s wildly uneven, though.

Whereas UTTER = verb vs. adjective, STATE = verb vs. noun, EXPRESS = verb vs. adjective. SPEAK is a verb in the original and reimagined meanings, and I’m not sure why the theme was accepted. Plus there’s that familiar phrase “talk trash” in one clue that sticks out as different from the three other clues that are just “verb + noun” phrases for which you will not find any dictionary entries.

There was a bunch of fill that was underwhelming, especially given the 76-word grid and ordinary theme square count of 48. UAR, EEN, lots of dullness like ODES and ERRATA and SENT TO. NO LOSS clued as [“Good riddance!”], as if we are actually all running around saying “No loss!”—and overlapping with NO PULP. I did like RUSTLES UP and SOFT-PEDAL, and a SAMOSA is always welcome, but the rest of the fill made me yawn. 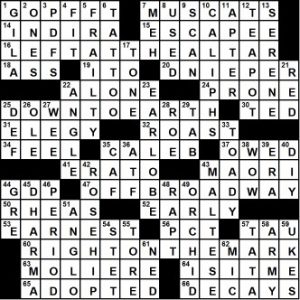 Hmm! I don’t know about this. What do you think?

I don’t see anything here other than that left, right, down, and off  are, or can be, key words in giving directions to a traveler … and each has its appearance in a separate ILSA that has nothing to do with giving directions. But the direction-giving thing has to connect up with a little more legitimacy, in order for the puns to work. I’d feel a little better, I think, if we were dealing with left, right, down, and up. Two sets of opposites, with each word being thought of independently as a direction of sorts in conversation. (Pretty sure I’ve made a puzzle with that theme before.)

Enough analysis. From the supporting cast, the following evoked comments:

1a GO PFFT–This is kinda fun, although this type of fill, where spellings are conjured up to represent sounds that, imo, were meant to be unspellable, is starting to run amok, if you ask me. (Mwahahahaha!)
20a DNIEPER–Flower seldom seen in crosswords these days.
64a IS IT ME–The grammatically correct, literary-based IS IT I catches a lot of flak. How can this rendering be better?
5d  FRAILTY–This word isn’t seen much, anywhere. I wonder why.
42 ROSE HIP–I don’t think I’ve ever encountered this term outside of crosswords. And I’ve not seen it in too many of them. 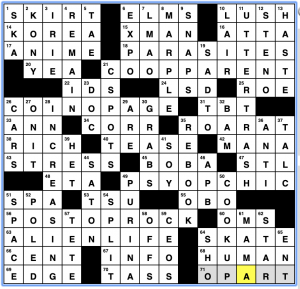 We have a second week of collaborative puzzles from the AVCX with this week’s edition.  This week’s puzzle is a 2.5/5 on the difficulty scale from Mira Martin-Gray and Niamh Girling, who are making their constructing debut with today’s puzzle.  Congrats, Mira and Niamh!

Let’s walk through the theme on this one:

So: I found this cute, if a little bland, theme-wise.  I don’t like the presumption of how I’ll potentially describe the answers in the revealer, since for the most part, the way they’re adding OP to otherwise standard entries (CO-PARENT, COINAGE, PSYCHIC, and POST-ROCK) isn’t quite as transformative as I’d like it to be.

Lil MAMA‘s “Lip Gloss” was a TRL standard in 2007, and that locker-slam beat is still pretty fresh!

While I was a little underwhelmed with the theme, there was a lot of personality shown in the choice of fill and cluing here.  I hope to see more in the future from Mira and Niamh! 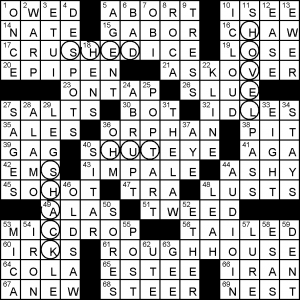 I enjoyed the wordplay of the revealing ROUGHHOUSE translating to SHACK/HUT/SHED and HOVEL. These words are then concealed in four starred answers. I added the circles to the answer key to highlight those parts more clearly. Unusually, the hiding was within one word only in all four cases.

The grid design was the pinwheel usually favoured of early week puzzles that typically leads to fast solving and grids without many forced or difficult answers. I had a few problems in the area of the unknown to me SHOVELPASS, but otherwise it was a typical easy LA Times puzzle. My favourite entry by far was AUDIOIN, with its nutty IOI vowel pile-up.