The title serves as the revealer, but it doesn’t do a complete job of explaining what’s happening. Each theme answer is a well-known phrase except the original ending of -CK has been softened to -G. 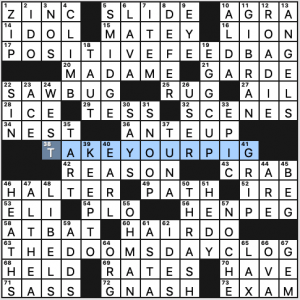 Not a bad theme, but I prefer there to be some purported reason for making the change from CK to G. But maybe I’m in the minority on that. And again, the six-letter theme entries don’t make sense to me. They’re too easy to lose sight of in the grid.

This didn’t seem like a very Thursdayish puzzle, but that NE corner slowed me down quite a bit with GARDE [___-manger (cook who prepares cold dishes)] crossing GIBRAN [“The Prophet” author] and ALDA clued ambiguously [Bisset’s co-star in “The Mephisto Waltz”].

Not much in the long fill department; the 11-letter central entry causes an unusual block configuration in the east and west. I do like EGG CUP, ALTHEA Gibson, and SMIDGE.

A good puzzle. Not a theme to get excited about, and I still don’t get some of the theme choices made, but three of the five were good. I wish there was some flashier fill as well. 3.25 stars.

I bounced around the grid for a while before I figured out the theme, and then it fell pretty quickly. Each theme answer has a rebus including AND; the crossings use only the letters before and after AND. It was easier to solve than explain. 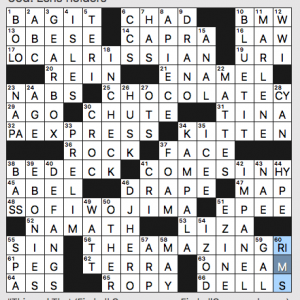 This was a satisfying, consistent solve, and not something I remember seeing before. Thanks, Paul and Peter! 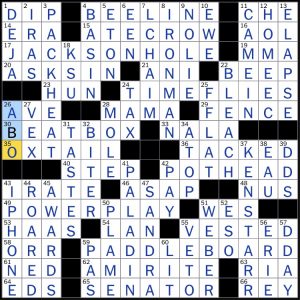 I’m not quite sure what to make of Brandon Koppy’s latest puzzle for the NYT.  It was tricky in a Thursday sort of a way, but also not quite?  Let’s discuss that in a minute, once we’ve looked at the theme here:

Well, it’s not quite a before & after…more of an after & after?  Each pair of clued words  can make a two-word phrase.  Each of the those words is also the first word of a two word phrase, and those second words can also be combined to form a third word or phrase.  I think I’d like this one more if there were more of a theme to either the clues or the answers – something to unify things rather than being a random assemblage of phrases that fit a certain word pattern.  It’s fine, but just fine.

Hope to see some of you at the Indie 500 this weekend in DC! 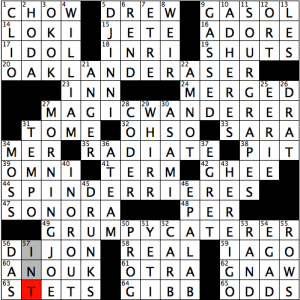 Another week of solving the BEQ puzzle without the across clues, and I feel like I’m getting more on Brendan’s wavelength with each passing week. This time the title, “Adders,” was a big hint: Each of the theme entries added two ERs (not necessarily consecutively) to a normal phrase, to punny effect. Like so:

Fun twist on the “add-a-letter” theme type, and the puns and clues were all very funny. Some nice long fill as a bonus, with MORNING JOE [Mika Brzezinski’s show] and SOUR GRAPES [Sore loser’s reaction].

Hope to see many of you this weekend at The Indie 500! To everyone else, until next week!

I wish body building were this fun all the time. I’d be buff. 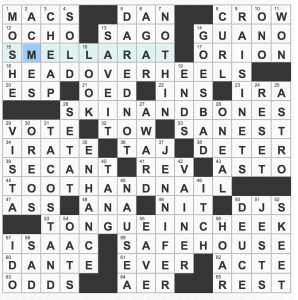 Simple theme today. I feel like I may be missing something that ties the themers together other than two body parts in each. Somewhat surprised when there was no revealer. Perhaps a consistent cluing style for each or a common middle word (OVER, AND, AND, IN) would’ve led to a stronger sense of cohesion.

With four theme answers, the grid still has plenty of room to breathe, which Debbie took advantage of with snappy fill. TACO STAND, DARED NOT, and SMELL A RAT were my favorites. 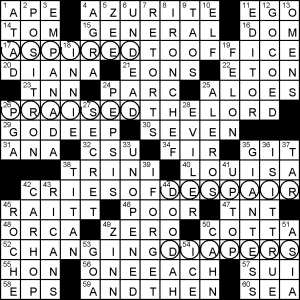 Well look at this! An anagram theme featuring actual discrete words and not “scrambling them somewhere in the middle”! And seven letters too, even if they are pretty common ones! The three entries suffer slightly from being in non-standard tenses in two cases and awkwardly plural in the third. This is partly the nature of the theme, as DIAPERS hands you two -ED words.

CHANGINGDIAPERS is a great revealing fifteen (even if it should be nappies, which anagrams to pinesap, and, er…) though I wish the clue had just read [New parent’s task…] which is simpler and avoids making a vague, unclear statement on gendered roles.

The entry with the best personal positive connotation is [Spanish stuffed pastry], EMPANADA, because our one local market has a stall run by an Argentinian couple that sell those and they’re magnificent! UPTOP was also snazzy.