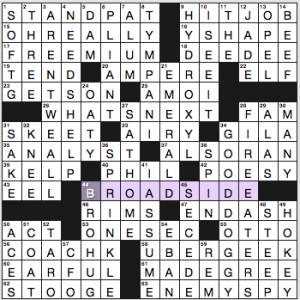 Hope to see dozens of you at the Indie 500 crossword tournament on Saturday! It’s pretty much guaranteed to be a good time with great puzzles. 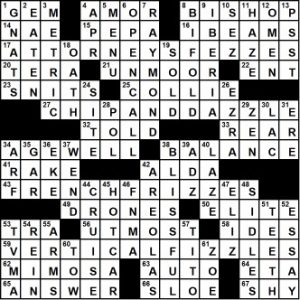 ATTORNEYS’ FEES become ATTORNEYS’ FEZZES. Why? Because those fees catch twos Z’s. And hang onto them. For some reason. And then, the same thing happens to CHIP AND DALE–CHIP AND DAZZLE; FRENCH FRIES–FRENCH FRIZZES; and VERTICAL FILES–VERTICAL FIZZLES.

UNMOOR still does not impress me. 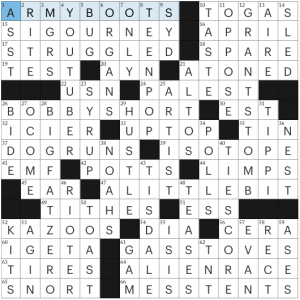 I think this is a themeless grid (I don’t do New Yorker puzzles very often), but there appears to be a mini-theme going on at 1a and 66a: ARMY BOOTS gets a punny [Private property?] clue and, similarly, MESS TENTS gets [Private dining areas?] as its clue. Hmm. Not sure about ARMY BOOTS as a phrase. COMBAT BOOTS, yes (as in, what your mama wears). ARMY BOOTS? Not so much.

Loved seeing SIGOURNEY at 15a with a clever clue [Weaver of alien tales?]. And hey, there’s another parallel with 64a ALIEN RACE [Humans, to Klingons]. But there’s that clue/entry dupe of the word “alien”. Some people are bothered by this, others are not. At least they’re pretty far apart in the grid.

BIG FAT ZERO is a lot of fun, but I’m less sure about A LITTLE BIT. I guess it’s “in the language” enough. GRANT’S TOMB, YOUTUBER, TIE SCORE, DOG RUNS, ISOTOPE, and KAZOOS: all good. I didn’t know BOBBY SHORT [Café Carlyle’s feature performer for more than thirty-five years], but that gap in my knowledge base sounds like my loss; he was quite the entertainer as well as a champion of African-American musicians. 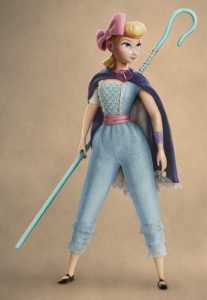 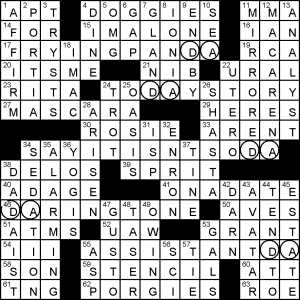 I like ASSISTANTDA as an entry; as a revealer, it’s a little oblique, but creative. Otherwise, it’s a pretty standard letter addition theme, with the letters being DA as indicated in the circles. FRYINGPANDA was for me the strongest, with SAYITISNTSODA the most ambitious, though I don’t feel the clue quite seals the deal.

Partly due to the central theme, we have a fairly low word count puzzle, but with a lot of “helper” squares as Rich Norris calls them. There are quite a few large-ish stacks but mostly of inflected forms. MACARENA is a stand-out although it recalls a time when I thought my peers had lost their minds; it truly is a rank piece of music no matter how you look at it. Also in the longer entries, IMALONE is an unusually suggestive choice for a newspaper crossword. Not sure how I feel about the signals it is sending me.

Today I learnt: [Apollo’s birth island], DELOS. I know the term Delian League, sort of. I never knew what “Delian” meant in that context, but apparently it is “of Delos” an island in the Aegean.