TIREDEST (45d, [Most overused]) is the fill of the day, though that’s not the theme. 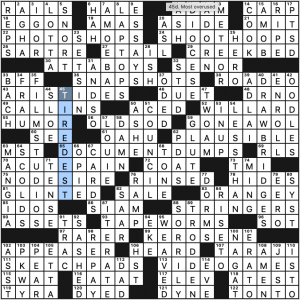 And if that’s not enough, there’s more in the Down direction.

As you can tell, these mostly missed the mark for me. And there certainly wasn’t enough HUMOR involved to sustain it.

Hmm. Maybe I’m being affected by fill like TIREDEST, ACUTE PAIN, NO DESIRE, LESS THAN, TRODDEN, SORRILY. Yeah, I’d have to say those capture the general vibe of the grid.

But there are some brights spots, certainly. I liked CREEKBED, ARISTIDES (though I needed every crossing), WILLARD Scott, PLAUSIBLE, ORANGEY [Like Trump’s tan], KEROSENE, TARAJI P. Henson, and “MANGIA!” [Order in an Italian restaurant].

For the most part, this was a slog. I felt the theme needed a major overhaul. Perhaps a reduction in size to a weekday puzzle would have been apt. 2.75 stars.

Looks like we have a NYT debut here. Congrats to Ari! 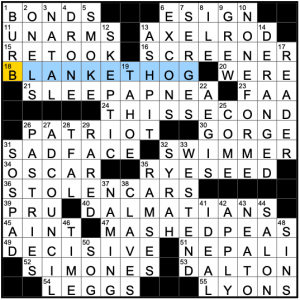 Pretty lively grid. I especially like the pairing of BLANKET HOG and SLEEP APNEA in the upper left. Other likables: David AXELROD, “NONE FOR ME“, DERANGED (see video below), THIS SECOND, SAD FACE :(, STOLEN CARS, DALMATIANS, MASHED PEAS, AD COUNCIL, DECISIVE, and WEST END.

I was fairly confounded by that northwest corner though. UNARMS doesn’t ever look like a real word to me, and while the clue is clever [Take heat from], that doesn’t change my dislike for the word. And crossing crosswordese ONELS [Some first-years after undergrad] doesn’t improve things. Plus I’m leery of that clue on BURB [Start of many a morning commute, informally]. Does anyone really use that word, even informally? And I really wanted PHONE as the [Means of surveillance] before I figure out DRONE.

Other questionables: [Winner of the lowest-scoring Super Bowl in N.F.L. history (16 total points)] is a PATRIOT. This is phrasing weird. It makes it sound like one person won that game (which was played earlier this year). Also [“___ so” (“Nuh-uh”)] for AIN’T. Not sure I’ve ever heard that without a leading “It”.

Despite a couple fiddly bits in the grid, I liked it. 3.75 stars.

And now for something completely different: proper use of the word DERANGED. Warning: some language in the background. 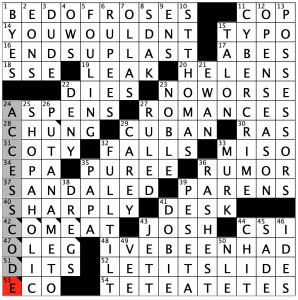 Back to a Downs Only Saturday solve! This was a doozie, and with stacks of long Down entries it was quite a struggle. But once you get a toehold, and hit the check answer a couple of times and see where you’re totally wrong, the puzzle fell. You can see plenty of my error marks in the image here, and although some don’t like checking answers, in this context it works. Yes, I have a NYT streak of nearly a year, and before that I had a 700+ day streak, and for those you cannot check the grid and see what you have incorrect. But I usually don’t get hopelessly stuck on those, and I certainly don’t do many of those with just the Down clues, although I see many are doing that now on Crossword Twitter and the like. But this puzzle is a great 70-word grid with 12, count ’em 12 10-letter entries spread out in all four corners. Sometimes in my Downs Only solving I am left scratching my head as to how some Across entries could possibly be clued, but nothing too obscure going in the Across direction in this one. A solid 4.5 stars for a fun solve!

Some notes (from the Downs, naturally!)

That is all for now! It might be a beautiful weekend, so I should go outside and mow my grass! 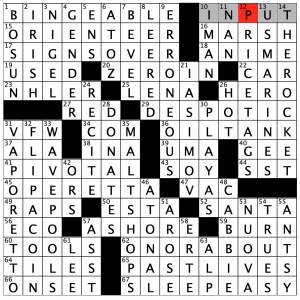 This one wasn’t too bad, but it seemed like it was impossible to start this puzzle. That is why I like crossword puzzles: you put yourself WILLINGLY into a situation that you don’t know how you’re going to finish, and then, piece by agonizing piece, you figure it out and you have a sense of completion and satisfaction, which you cannot always find in this world. (As a side note, I recommend the movie Puzzle, which tackles some of these same feelings that crossworders encounter.) Once some footing was established, this fell without too much difficulty, at least for a Stumper. I am anxiously awaiting to see if anyone solves this Downs Only on Twitch (set yours up for alerts if you want to see this!), which with the Indie 500 happening this weekend either has a much better or much worse chance of happening! Which reminds me: I better purchase the home version of these so I can solve along with everybody there! 4.6 stars for another gem from Stan.

Maybe I should start on next Saturday’s Stumper today …

Tina Lippman’s Universal Crossword, “Give Me A T!”—Jim Q’s writeup 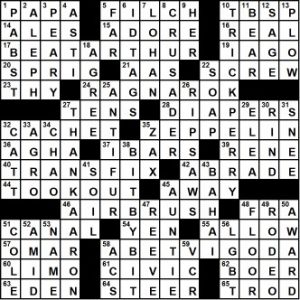 Title says it all!

Standard “Add a Letter” theme, using names only. Nothing wrong with that- the consistency of all the T’s being added to the first name only, and the resulting clue still pointing to the person being altered was appreciated. Also nice that the down themers added a letter before the first names while the across themers take on a T at the end of the first names.

Fill felt a bit crunchy at times and proper noun heavy. Especially troublesome for me was the CATT/CACHET cross amid AGRO, CHAO, and the variation of a Turkish title (AGHA?). COLE, REEVE, BAHAI, PEARY, ELEA, OMAR, RAGNAROK… it seemed like everywhere I turned a proper Somebody or Something or Someplace was waving hello.

BIT BY BIT and AIRBRUSH were fun in the fill.