A fresh take on the “Add a Letter” theme!

THEME: Phonetic sounds of letters (not just/necessarily the letters themselves) are added to common words/phrases to create wacky results.

This was a very fun puzzle. I especially liked uncovering the revealer PHONETIC halfway through the solve. I was totally mystified by the themers I had uncovered to that point, and with the Aha Moment mid-solve it was more rewarding than finding it at the end, especially because it was also a huge help in figuring out other answers in the puzzle.

I wanted to start a slow clap for figuring out how to add AITCH (H) to a base answer. Unfortunately, the base phrase for that answer (WILD) is not all that exciting, so it was not my favorite of the bunch, but still…

I enjoyed the answers MANATEE LIVE, ENDIVE BOMBER, and DAYS OF EEYORE the most because of the liveliness of the base phrases (MAN ALIVE!, DIVE BOMBER, DAYS OF YORE) and the resulting, rather funny answers.

Probably the weakest answer was EMCEE PATHS, not only because EMPATHS doesn’t make for all that exciting a base phrase, but the letter EM is also phonetically part of the answer. 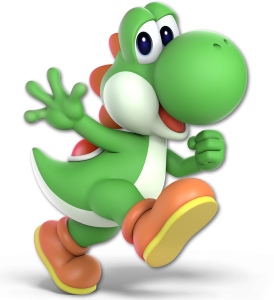 Jim P. sitting in for Amy who’s enjoying the festivities at the Indie 500 tournament.

Lucky for me I got a fun-filled grid to blog by our very own Erik Agard. He’s taken common phrases and re-purposed them with respect to stoner film culture. Let’s take a look. 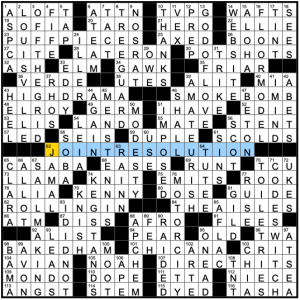 This is how you do a phrase repurposing theme (for lack of a better term). All the phrases are in the language, the modification is consistent throughout, and the embedded humor is the icing on the cake. (Maybe a minor deduction for the last entry where it’s the second word that is pot-related instead of the first as in all the others.) 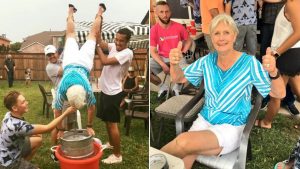 Grandma does a KEG STAND

Better still, the rest of the fill is strong and interesting. Check out all this good stuff: FLOOR MODEL, TREEGUARD, GOD OF LOVE, LOUISVILLE, OFF THE GRID, AMATEURISH, MEN’S TENNIS, SAILMAKING, MOTOR CITY, TOILETRIES, CODE SWITCH, CHICANA, and KEG STANDS.

Oh, and if you’re in the mood to have your own stoner movie marathon, here are some ideas. 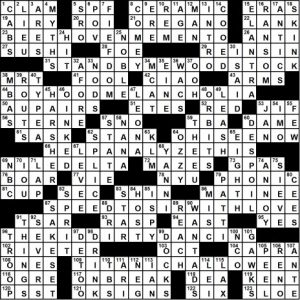 This is a fun theme all the way around. Theme answers have funny, punny clues that lead to two consecutive film titles. These titles make grammatical sense and have some connection to reality. All the clues have a Peanuts reference, creating, in each instance, a third, non-existent film that you can make just as funny as you want it to be.

How and you not laugh at every one of those? how can you not?!

There is a lot of theme here. And yet, there’s plenty more good stuff in this fill. I like this little combo:

And these, from the Downs, are excellent:

THEME: The letters L-G-B-T-Q begin each of the five theme answers.

Solid puzzle with solid theme answers, though it’s somewhat odd to see a gender specific clue for 53A  [*Young boy’s father, frequently] in a puzzle whose intent is to be inclusive. Especially since my niece has a T Ball game scheduled for 2:30 today.

ALTHEA and CYLONS were new for me. Happy to add them to my general knowledge. Now I hope they stay there.

Fun to see CHER make an appearance, not only because she’s a pillar in the LGBTQ community, but because I just saw “The Cher Show” on Broadway last week. A fun diversion, but I’d have to agree with the NY Times review of it.

I didn’t understand the theme until I filled in the final theme answer at the bottom of the puzzle. Each theme has a short A sound changed to a long A sound. 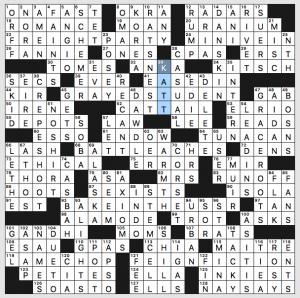 The theme is consistent and solid. I didn’t find it all that much fun; that’s a personal-taste thing, though, not a quality issue.

What I didn’t know before I did this puzzle: that William KATT was in “Carrie.” That may be because I spent most of the film with my face buried in my boyfriend’s shoulder. That may be why he took me to the movie in the first place.