I love Lynn’s Monday puzzles. They are accessible and fun for new or inexperienced solvers, and smooth and satisfying for me. This is not easy to do, and Lynn does it every time. Brava.

Today’s theme pinwheels around the grid with four answers running across and two down. 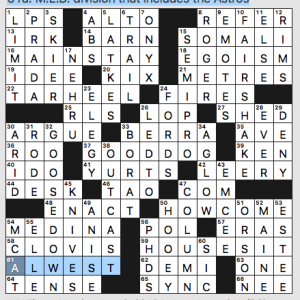 What do all these things have in common? Lynn is glad you asked. 37a [Praise after a proper response to the end of the answer to each starred clue] is GOOD DOG. That’s what you say when the pupper SHAKEs, STAYs, lies DOWN, HEELs, COMEs, and SITs. Good theme. 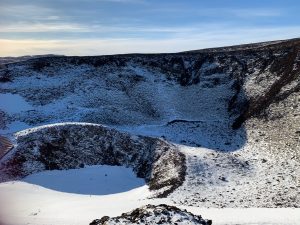 What I didn’t know before I did this puzzle: that CLOVIS was the first king of the Franks. 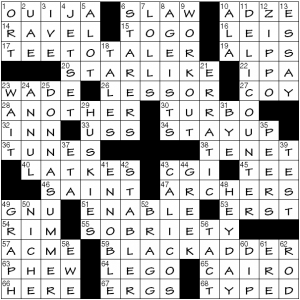 I didn’t understand the theme until I’d finished the puzzle and stared at it for a few minutes.

COUNTER, TOTALER, SUMMER and ADDER all add up to a synonym theme. TOTALER is not a word anyone uses, although I’m sure it’s in a dictionary somewhere. Other than that, it’s a perfectly fine theme. I could have done without the fusty crosswordese ORT at 1d. It’s worse when that stuff is right at the beginning of the puzzle.

Nothing I didn’t know before I did this puzzle and nothing I know because I have a teenager. That’s it for me! 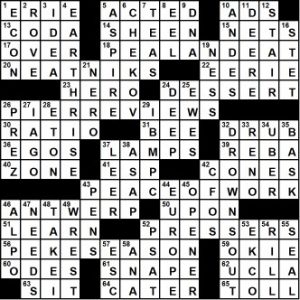 No mysteries here. See title. We have puns that begin with …:

This looks to be a debut puzzle for our constructor. Congratulations, Sherman!

But I know for a fact there’s been at least one other WSJ puzzle with this exact title. That one was pretty goofy, though, yeah? This one’s a little more straightforward, but well done, nonetheless.

56d tells us that [Inner peace, incorporated in the four longest Across answers] is CALM, which is what we should be looking for in the theme entries. 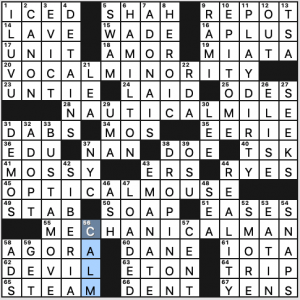 A strong set of themers. Each is “in the language” and I like the consistency in that the hidden word is broken down the same way (CAL-M) in each phrase. (The equally-as-good alternative is to have the hidden word break down in each of the three possible ways, but then you’d only have three entries, and good luck finding a word that starts with LM-, unless of course you use LMNOPEN.) 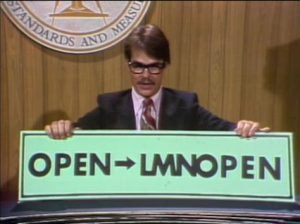 Further, having theme answers that are 12- and 13-letters in length means those entries get pushed toward the middle of the grid, causing extra constraints to have to work through. But Sherman appears to have handled it well giving us great fill to boot.

Check these out: PLAY DIRTY, BUST A MOVE, HAMILTON, HEROIC, EPITOME, and SIBERIA.

But on the whole a strong debut and a very nice Monday grid to start the week off right. Four stars.

Man… I was so confident I was going to have a record setting BEQ time today. Then I met the southeast. Dagnabbit! Somehow muddled through and it was still very satisfying when Mr. Happy Pencil made an appearance.

Even with the southeast making this (perhaps) more difficult than necessary, this was a good ride. 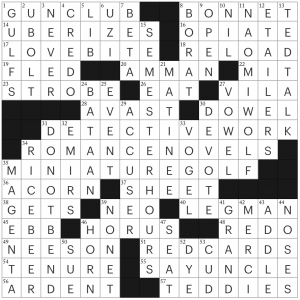 Today’s New Yorker puzzle from Patrick Berry was a workout!  This was a nice brain-squeezer after a fantastic Indie 500 weekend, but it didn’t make me SAY UNCLE.

Today’s highlighted bit of fill from the New Yorker’s interface was TED TALK. Here’s my current favorite TEDx talk, about how to sound smart in your TED TALK.

A nice challenge to start my Monday.