Posted on June 2, 2019 by Jim Peredo
grid: 9ish with 2 errors, meta: an afternoon of cogitating

Jim P. here sitting in for Laura who is not at a librarian party but at a cruciverbalist party (the Indie 500 tournament).

Our mission…to find a “native of a certain place.” Hmm. Note that it doesn’t say a country or a state, or even that this native has to be a human. Could it be a plant?

Let’s see what we’ve got. The longest Across entries are all proper names so that seems like the likeliest place to start. Let’s meet the gang. 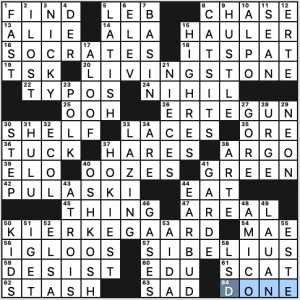 What jumps out at you? Well, for me it was the “gun” in ERTEGUN followed quickly by the “stone” in LIVINGSTONE, “crates” in SOCRATES, and “ski” in PULASKI. But then things fell apart with KIERKEGAARD and SIBELIUS.

Welp. Not seeing any other connections in the names or their clues. But taking a gander at the title, aha!, I see the word “natives” in there. Re-parsing it we get, “Alter natives”. And we’re looking for some sort of native, aren’t we? I think this is the right track.

So let’s check where these dudes (and yes, they’re all dudes) are from. To the Googles! In order, they’re from Greece, Scotland (or Britain), Turkey, Poland, Denmark, and Finland. Ah, they’re all from different countries. This seems right.

But we don’t want the names of the countries, we want what the natives are called. So let’s try that again. In order, we have a Greek, Scot (or Brit), Turk, Pole, Dane, and Finn. Interesting how all but one are four-letter words. {My Spidey sense should be tingling at this fact, but maybe it’s defective.}

Now what? Sometimes answers to metas are found in the initial letters. Here we have G S (or B) T P D F. Not seeing anything there.

But the title tells us we have to “alter” the “natives”. How to do that? Anagramming? There is no good anagram of “Greek”. Keeping along the lines of initial letters, can we change those words into other words? “Greek” could be “creek”. “Scot” doesn’t work, but “Brit” could be “Writ”. “Turk” could be “Murk” or “Lurk”. Pole could be…a whole lot of things. Without any other guidance this feels like it’s getting out of hand. {Again, my Spidey sense should be off the hook by this point, but I feel like I’m floundering.}

Hmm. Getting nowhere. I’m still bothered by that southeast corner where DONE crosses AMICO and LAUAN. I had errors there where I thought DICE seemed a suitable answer to the 64a clue [Ready to be served] (where I’m using “ready” as a verb meaning “to prepare”). AMICI is a word I’ve heard before (or maybe I’m just thinking of actor Don Ameche) and LAUAC seemed perfectly plausible as the [Wood sometimes called Philippine mahogany].

That’s some thorny fill, especially when you add A REAL into the mix, and it doesn’t seem like it has to be since the only thematic element in that corner is the end of SIBELIUS. It took me about a minute (without a computer) to give that corner a makeover (see picture).

Thinking logically now, if we have some really constrained fill in a section that doesn’t seem like it should be constrained, then there must be something else going on. The answer to the meta must lie within the fill of the grid.

And that’s when my eye landed on TUCK at 36a which I realized was one letter off from Turk…an alteration of the native Turk, if you will. Ding ding ding! This is it; I know it.

Looking for the rest, we find (in the same order as our long theme answers):

So we “altered” the “natives” to get specific fill entries. Ah, now notice that the SE corner has far more constraints with SCAT and DONE. That explains the kludgy fill.

All righty, then. Let’s see what changed from our “native” words to the grid words.

Taking the changed letters from the grid (in red above) we get N, A, C, K, O, D. NACKOD? What the hell is NACKOD? Is there another layer to this meta?

Hang on, let’s look at the counterpart letters from the “native” words: K, O, R, E, A, N. Ah, that’s better. We have our answer. And now we see why the instructions said “place” not “country”.

Well, what do you think? A pretty good workout, eh? I feel like I should have figured it out sooner than I did, and no doubt, some of you probably got it within a few minutes. But I’m just glad to have gotten there in the end.

I guess I can forgive some of the kludgy fill since it all served the higher purpose of hiding the extra theme answers. A fun time. 3.75 stars from me.