Jim P. here sitting in for Nate, which is only appropriate because if you did last Friday’s contest crossword, you know you had to re-parse “Alternatives” to get “Alter natives”. Today’s puzzle is titled “Alternate Address,” and if you “Alter Nate,” you get this guy {*points two thumbs at self}. I’ll shut up now.

Well, not yet. We have to take a look at veteran constructor Peter A. Collins’s offering today. He’s got a nifty theme where he’s taken common phrases whose first word can be a famous person’s last name and whose second word can be a synonym of “name.” These phrases are the clues and you have to supply the first names. 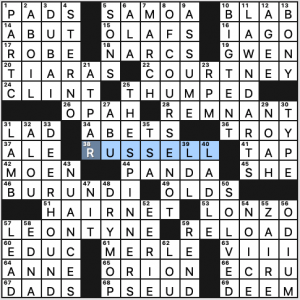 I really like this theme. There’s only a small set of phrases that this can be done with and Peter managed to find most, if not all, of them. And to craft a symmetric set of famous-enough people on top of that is a tall order. So having some short (5-letter) theme answers is just fine in this case, and having names that aren’t universally known is to be expected (as long as the names are well-known enough).

But with all those proper names and more besides in the grid (OLAFS, IAGO, GWEN, MERLE, ANNE, ABU, ALOU, EDNA, LOU), plus even more in the clues, I’m gonna bet some solvers won’t be too keen on this puzzle. I liked it fine, but, yeah, maybe some of the extra proper names should have been weeded out. 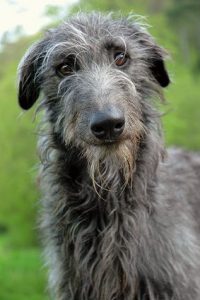 Bottom line, if you don’t like proper-name-heavy grids, then this one wasn’t for you. There’s always tomorrow. But if you can get past them, this grid has a nice theme and strong fill. 3.8 stars. Now I’ll shut up. 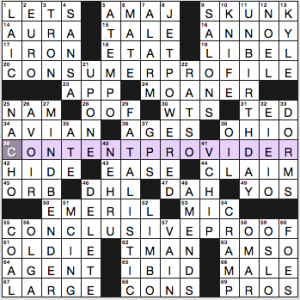 I did a Onelook search for con* pro* phrases, and conic projection was the only one besides CONTENT PROVIDER that would fit into a 15×15 grid—and the only phrases I liked besides 39a have 18 and 20 letters. There aren’t enough familiar con-/pro- phrases to make for a fun crossword theme of any size, in my opinion.

Neatest fill/clue: 11d. [“Occasion” celebrated 364 times a year in Carroll’s “Through the Looking Glass”] UNBIRTHDAY. Also a fan of OOF, which I wish I could play in Words With Friends because I certainly type the word regularly.

That was outweighed by the fill that felt ill at ease in a Tuesday grid, or just generally clunky: A MAJ, WTS, DAH, plural YOS, T-MAN, AM SO, IBID., UP ONE, and (for those of us who didn’t study music) A TEMPO. 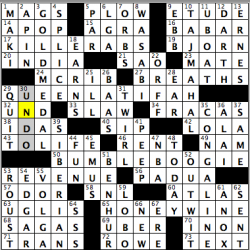 Good morning, everybody! I hope you’re all doing well and my apologies to you all for the late(r) posting of today’s analysis. Well, this grid can only be described in one word: un-bee-lieveable! Each of the first words in the four theme entries also is a descriptor of a type of bee.

Don’t know why I’m obsessing over this now, but seeing CONGA LINE, while making me happy for its fill, has made me sad that I’ve never been part of one in my life before (35D: [Novelty “snake” dance based on a Cuban carnival dance]). One of these days, I’ll be part of a conga line, for fear that I’ll be putting these hips and/or shoulders, which I have a whole lot of, to waste!!  Love the subtle (though maybe not-so-subtle) shoutout to June being Pride Month with addition of TRANS in the grid (71A: [Prefix that means across]). This grid takes us around INDIA (20A: [New Delhi’s country]) as well, with both AGRA (15A: See 10-Down]) and TAJ MAHAL being included (10D: [World-famous mausoleum at 15-Across]). With the French Open being contested now, nice to remind you that BJORN was just as good on clay as he was on the grass courts of Wimbledon, winning six singles titles at Roland Garros to go along with his five consecutive titles at Wimbledon (19A: [Borg who won five consecutive Wimbledon singles titles]).

“Sports will make you smarter” moment of the day: LOBO (59D: [Gray wolf]) – No one may have played more of a role in the rise to prominence by the University of Connecticut in basketball than former player and current ESPN women’s basketball analyst Rebecca Lobo, who led the Huskies to their first of 15 national championships in the sport (11 women, four men) in 1995, a season in which the women’s team went a perfect 35-0. She won the both the Naismith Award and Wade Trophy as the national player of the year. After her time in Storrs, Conn., she became the first face of the New York Liberty WNBA franchise, assigned to the club in the league’s first season in 1997. Lobo was inducted into the Naismith Memorial Basketball Hall of Fame in 2017.

I’m currently supervising a high school study hall, and a student just let me know I had deodorant marks on my shirt. Fitting.

THEME: Common phrases with deodorant brands in them.

I like this idea! Both the consistency in the cluing and answers makes for a tight puzzle. SHADOW BAN is a new term for me, and I betting some others may not of heard it before. Per Wikipedia: Shadow banning (also called stealth banning, ghost banning or comment ghosting) is the act of blocking or partially blocking a user or their content from an online community such that it will not be readily apparent to the user that they have been banned.

That’s a fun term. Glad I know it now.

Clean fill all around, though I am noticing JML’s comment that the clue 36A [Cool 2002 Disney film?] for ICE AGE is just plain wrong (it seems JML is correct).

Looks like a debut for Dexter Coleman! And a strong one at that. Congrats. 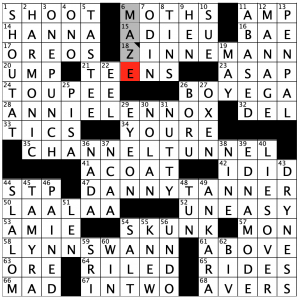 The theme was, I thought, readily evident after I got the first theme answer solved at 28A, but it turns out ALL of the double letters are Ns! That did NOT help, however, in sussing out the theme answer at 18A, whom I do not know!

It is OK that I don’t know someone; perhaps others did know who this was. My main issue was brain-cramping at 6D. Good thing my timer didn’t start! I wasn’t in a hurry once I realized that it wasn’t working. Still not too slow of a solve, though. At least I don’t think so! 4.3 stars for a puzzle that taught me a thing or two. 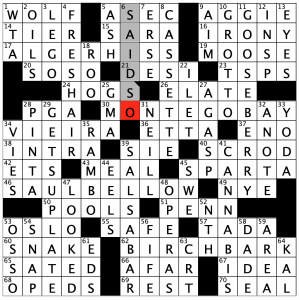 My Downs Only ability is getting better! This one wasn’t too bad, even though the theme wasn’t readily evident until I was done and stared at the grid a bit:

What should we call this theme? All of the long answers end with scary or annoying animal sounds. I’ll lean toward the scary side; some of these sounds, depending on the animal, I never want to hear! Another clean grid from the still prolific C.C. Burnikel; 4.3 stars.

A few more highlights (from the Down, of course!

More Downs Only solving this Saturday. I hope!