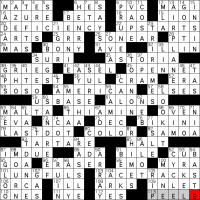 hello and welcome to episode #574 of matt gaffney’s weekly crossword contest, “Search Party”. for this week 5 puzzle, the instructions ask us to find an eight-letter name. okay, what are the theme answers? it’s not clear, but the longest across answers are:

there are a couple of other 8s and 9s among the downs, but i wasn’t sure they were theme answers. anyway, after thinking about these for a while, i noticed that THIAMINE DEFICIENCY is a phrase—in fact, it is a phrase that suggests the disease BERIBERI, which is an 8-letter word fraught with wordplay. that seemed like it might be relevant. a short time later, i noticed that AMERICAN can also pair with {Margaret Mead visited it} SAMOA (not one of the longest answers, but still) to form AMERICAN SAMOA, the overseas territory whose capital is PAGO PAGO. now i knew that wasn’t a coincidence, but i was unable to find anything else to go with it. i thought perhaps something could be paired with UPSTARTS to suggest HOTSHOTS, another 8-letter answer that doesn’t look like it follows the same pattern as BERIBERI or PAGO PAGO but actually does. but nothing was clicking loudly enough.

i looked at the puzzle several times over the next couple of days (on the metro and on my flight back from DC), and on something like my fourth or fifth viewing, i finally noticed what probably should have been my first in, which is that there are a whole lot of clues consisting of two rhyming words. sixteen of them (!), to be precise:

read off in clue order, the first letters of the corresponding answers spell PAGO BERI (among the eight acrosses) and then PAGO BERI again among the eight downs. this is a great deal of confirmation, and i guess it does mean there isn’t a third reduplicative 8-letter answer suggested by a pair of entries, but it doesn’t really provide anything new. most relevantly, it doesn’t get us any closer to the meta answer.

so what is the meta answer? i still don’t know. i’ve had some ideas and followed up on some leads, but none of them have amounted to anything. the one i liked best was hoping that the eight PAGO BERI across answers each intersected one of the PAGO BERI down answers, but no, they don’t. RHIMES intersects both BILE and RACETRACKS, but most don’t intersect any, and none of them intersect THIAMINE, DEFICIENCY, or SAMOA.

some questions i still don’t have answers to:

grid-wise, here are some considerations i’ve been thinking about. most of the longest answers in grid are thematic in one way or another. the exceptions are {It may be saved at a ball} LAST DANCE, the symmetric partner of AIRPLANES, and a handful of 8s: UPSTARTS, LUNGFULS, TRIREMES, and SAND REEF. LAST DANCE is noteworthy because it’s in an area of the grid where there isn’t already a lot of theme, and also it intersects the very weird answer {Eating it clears a Pac-Man board} LAST DOT, which is not only a totally roll-your-own phrase but also a dupe of LAST. so i think there is probably something constrained here. DANCE in the context of reduplicative names suggests either cancan or cha-cha(-cha), but i can’t see any evidence that those are necessarily related to anything here.

if there isn’t anything else in the thematic in the grid or clues, i wonder if we’re supposed to find a meta answer that rhymes with PAGO BERI? that would kind of tie both aspects of the theme together, although it wouldn’t explain the title (unless the answer itself had something to do with either search or party). a complicating factor is that PAGO can be pronounced either “pah-go” or “pango” (i think the latter is closer to the pronunciation in samoan).

an alternative idea is the meta answer is another 8-letter reduplicative phrase. it might well be HOT SHOTS, i guess, both because it is mildly suggested by UPSTARTS, and also because it is a rhyming (well, near-rhyming) 2-word phrase, like the sixteen rhyming clues, as opposed to the same four-letter word twice. i just don’t have a strong enough “click” for it—although it is the title of a movie, it isn’t what i would call “an eight-letter name” as per the instructions. and if it is the meta answer, the inclusion of {Hot spot} as the clue for OVEN would seem to be a pretty significant inelegance. nevertheless, if i don’t come up with anything better, i’m going to try HOT SHOTS and hope it’s right.

it’s pretty frustrating to have come this far and not get to the meta answer, but i’m well and truly stumped. i don’t even know if i’m supposed to find the next step in the puzzle itself, or if i’m supposed to just leap to the final answer based on what i already have. there is already a ton of theme material in the grid, but it’s a 19×19 and it does seem like there’s just enough room for one or two more theme answers.

well, that’s all for me, i guess. somebody can let me know what i missed in the comments.