The revealer, I/O ERROR [Computer glitch responsible for four of this puzzle’s answers] is our indicator that I’s and O’s are switched in the other theme entries.

Do people know the term I/O ERROR? I certainly do, because my background is in computer science, but I wasn’t sure if it made it out to the general public. My suspicion is that it’s becoming less well-known over time as operating systems become slicker and more user friendly.

Anyhoo, I think the term makes for a fine conceit for a theme. Let’s look at the actual theme answers. (By the way, the title gave me pause, but I believe it should be re-parsed as “Oh, I/O!”) 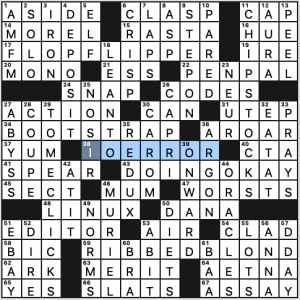 Two worked, two didn’t work as well. I have to believe there are a lot of potential entries for this theme, so it would have been nice if they were all equally strong. (A cursory look found BIG SHOT, but I suppose that wouldn’t have worked for the WSJ.)

How about the fill? DOING OKAY is just…okay. And I don’t think I’ve ever seen BOOTSTRAP used as a verb [Develop without reliance on help from others]. WORSTS was another eyebrow-raiser [Gets the better of]. Wouldn’t a better answer be BESTS?

LINUX makes for good fill, given the theme. ORACLES [Wise ones] is also somewhat theme-adjacent, given the name of the computer technology company Oracle. And D-DAY makes a timely appearance, though it’s in no way theme related.

I like the theme but it felt a bit uneven in execution. 3.3 stars.

This was the toughest Fireball themeless we’ve had in a while, although I think I said that about the last one, so either Peter is getting tougher or I’m getting weaker.

The NE corner was the last to fall for me. There are several answers with strings of consonants – DR DRE, ABC TV, CD CHANGERS, and LITCHIS. It looked like a mess. The cluing was also challenging, especially 20a [Soapberry family trees] for LITCHIS. I was also confused by 11d [Once-popular dash features] for CD CHANGERS. All of the CD CHANGERS I knew of were in the trunk of the car, with a single CD player in the dash. A bit of searching tells me that there were, indeed, in-dash changers. I don’t know how popular they were, but I can let that go. 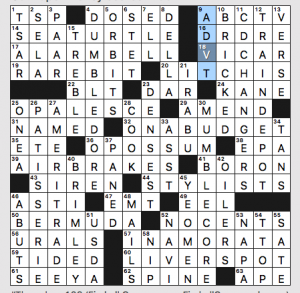 What I didn’t know before I did this puzzle: see above re: MUMBLECORE. I’d never heard of the OPPOSUM called a yapok. They are apparently water possums and they look like this: 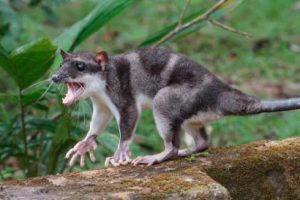 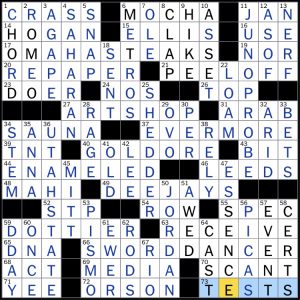 I understand the why for today’s NYT theme, but it leaves me a little underwhelmed:

Today is the 75th anniversary of D-DAY, and the five beaches involved (Omaha, Gold, Sword, Juno, and Utah Beach) are all included in the grid.  I think commemorating this milestone via crossword is fine!  I even think this way of handling the theme, with answers starting with each of the beach names is okay, but the overall execution feels just okay.  All of the fill here feels standard, but in a way where this puzzle could have been constructed any time in the past five years and set aside for this big numerical milestone.  I come to the Thursday NYT looking for something that bends the rules in a fun way, and this just feels like any given Wednesday puzzle. 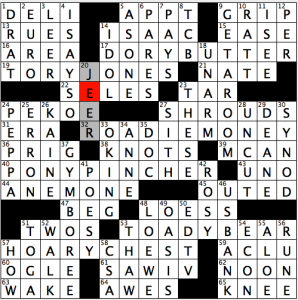 This week, Brendan treats us to some wacky phrases made by replacing a vowel sound with an “oh” sound. Like so:

Great cluing on the puns as always from BEQ, and even with the six themers there’s still some fun additional fill like GYMBOREE, “GET A ROOM!”, and US BANK.

A puzzle after the heart of my wallet…

THEME: The word “AND” is deleted from common phrases to make new, wacky ones instead. 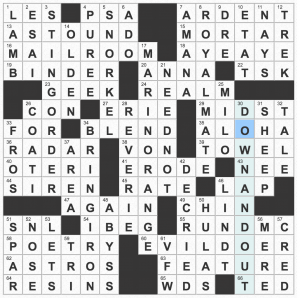 One of those crosswords where I had to stare at it for a bit before understanding the theme. My post-solve AHA came with MARIN ORANGE, which clearly looks like MANDARIN ORANGE. I liked all of the theme answers, and DOWN AND OUT certainly makes for a perfect description of what is happening if read correctly (the DOWN “AND” is OUT). It may feel like the revealer clue is oddly worded, but it’s not.

With the exception of MARIN ORANGE, the theme answers actually feel like they could be things, so it may have missed the wackiness mark. 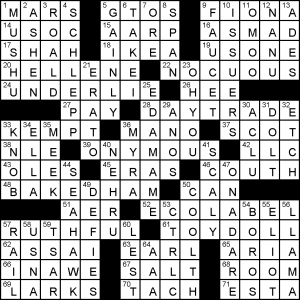 I’m sure there are stacks of lists of these on the internets. I typed two words into Google and got this. That said, any word nerd (that is most of the target audience of this or any crossword puzzle) will enjoy piecing together these rare words whose opposite equivalents are far more common. So: (UN)GAINLY, (IN)NOCUOUS, (UN)KEMPT, (AN)ONYMOUS, RUTHFUL (RUTHLESS), COOLTH (WARMTH) and (UN)COUTH.

I just wished the rest of the puzzle had more care to it. In a puzzle focusing on rare words, using SCHLEPP and then pretending it isn’t a var. is cheap. The worst area though is the top-right. I don’t know how an area with ISSUERS, OMOO, NANU, ADES crossing ASMAD and USONE with your theme answer NOCUOUS on top of it all can pass muster. Four of those are not real-world answers, they are cruciverbal extractions. One is a partial with one way to clue it and then there’s a largely forgotten Victorian work of fiction.