Second, notice the similarities between pairs of clues and answers in the grid. Certain pairs of clues are intended to be exact opposites of each other, and their answers differ by one letter: Ls appear in the words on the left side of the grid, and Rs appear on the right. Pretty nifty, eh? 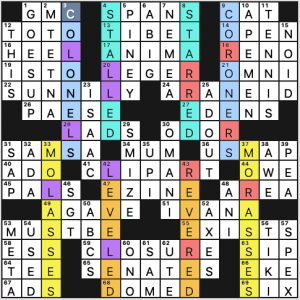 I like the theme, but trying to turn some of these words into opposites made for some tortured cluing. “Good stick situations”? COLONELS as employees only at the starts of battles? And I’ve never heard of a coroner being involved in the aftermath of a battle.

But I’m willing to suspend my disbelief a little bit because I think it’s pretty cool what Jeff found here. The more interesting entries are the ones with multiple Ls and Rs in different places (COLONELS/CORONERS, LEVELED/REVERED). 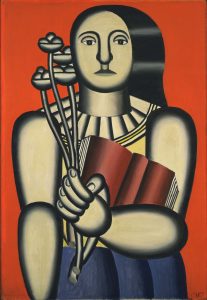 Fernand LEGER’s “Woman with a Book”

Further, I really like the fill in the middle between the L and R words, especially CLIPART and CLOSURE since they use those key letters. I would put LEGER [Cubist Fernand] in this category as well, but frankly, I just don’t know the name.

With so much theme material, the rest of the fill is there mostly in a support role. And unfortunately, there were some nits that could be picked there as well:

Fave clue goes to 30a [Something a little fishy, perhaps] for ODOR.

Overall, though, the theme is front and center here, and I like it. 3.75 stars. 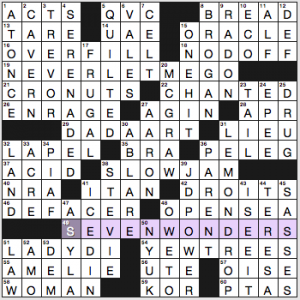 The theme revealer is 49a. [Monuments of classical antiquity … or what literally is missing from this puzzle], SEVEN WONDERS. There are seven grid entries that are incomplete, needing the word WONDER to make sense: 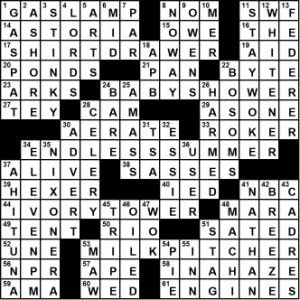 Hmm. The title is “Er …” and the theme answers all end in “er.” (As do ROKER, HEXER, MER, WHITENER, FEDERER, and USER). What’s up with this? Hold that thought. I’m going to try to think and analyze as I go.

So, … theme answers are ILSA’s with actual definitions. Theme clues are punny definitions. Three require no change of pronunciation. Two require that the familiar au̇ sound of shower and tower become ō. What to make of this? Is it inconsistent? Or does it offer a full-house (3-2) split as to the possibilities? And is there more to the connection between title and body than the themer’s er endings? And what is to be made of the ellipses in the title? Just asking.

Other stuff of note: 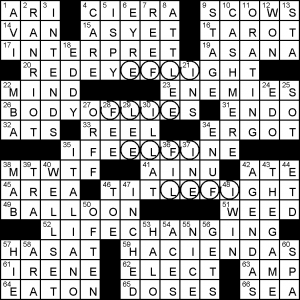 LIFECHANGING is a clever, punchy revealer. That said, I feel beyond saturation point when it comes to “rearrange letters and hide them in the middle of entries” themes. The entries are solid enough: REDEY(EFLI)GHT, BODYO(FLIE)S, IFE(ELFI)NE and TIT(LEFI)GHT.

The most obvious thing that felt personally irksome for me was the choice of cluing in IFEELFINE, THEGAME, and ISPY. All are specific things: Beatles song, rapper, and TV show, but they are instead clued as a vague phrase and two partials, one seven letters. That said the decision was probably made to keep down the difficulty level of the puzzle.

The grid design is quite taxing, particularly for a simple theme: bookending 12s (the first themer and the revealer) mean you get one less square of breathing space between your themers. And then to go with four themers as well means only one line between each. That’s putting a TON of pressure on the whole grid. 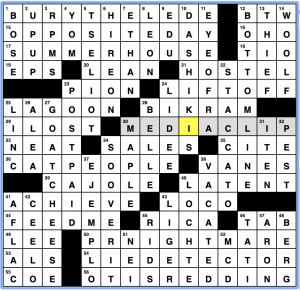 Wyna Liu has today’s AVCX puzzle, and I was SO excited when I saw that byline today.  I had the absolute pleasure of sitting next to Wyna at the Indie 500 last weekend, and we had a great time talking and solving.  She is a delightful human being, and if that wasn’t enough, she also writes kick-ass themeless puzzles AND makes awesome geometric jewelry.

This was a TOUGH solve, but absolutely rewarding.  Let’s poke around under the hood:

OTIS REDDING wrote and performed the original, but this will always be Aretha’s song to me.

This puzzle was challenging, but I really dug it, and I hope you did too.