This is a classic Lempel: smooth, fun, accessible, and amusing. Each theme answer is missing a feminine pronoun (the “miss” who is “out) and wackiness results. 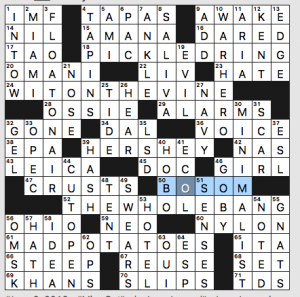 And we have two revealers: 39a [Candy company whose name includes this puzzle’s missing pair] is HERSHEY and 32a [With 46-Across, 2012 best seller with a hint to what’s missing in the four longest Across answers] is GONE GIRL.

That’s a lot of theme material, and it requires a fair number of familiar three-letter entries like ESL, TAO, and NIL, as well as the clunky partial IT A (for 65a. “Keep ___ secret!”). I think it’s worth it for a creative and solid theme.

What I didn’t know before I did this puzzle: that Toni Morrison was born in Ohio, that Ossie Davis directed “Cotton Comes to Harlem,” and most strikingly I’d never heard of the aforementioned Nancy Wake. She was a native New Zealander who fought with the French maquis during WWII – and that doesn’t begin to describe her achievements and exploits. Thanks, Lynn, for bringing her to my attention. 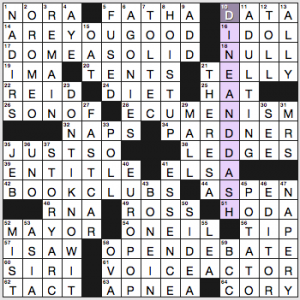 I don’t know, folks. I just didn’t enjoy this puzzle. I see some fill I like—“DO ME A SOLID,” BOOK CLUBS, OPEN DEBATE, VOICE ACTOR, “DON’T I KNOW IT?!” (overlapping, alas, with crosser I SAW and nearby I’M A), DINE AND DASH, and ADULTING. But overall, I felt grumbly throughout the solve. 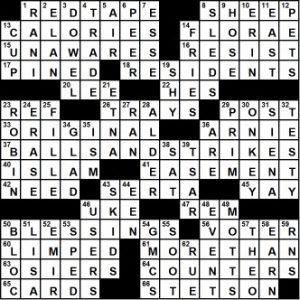 Fun! Let’s see if I can figure this out as I solve. I see a bunch of starred clues:

Elsewhere we find some RED TAPE, though not MORE THAN we can handle. And, the symmetrically placed ORIGINAL EASEMENT could, I suppose, be an Edenic reference.

With a paucity of ILSA’s in the fill, the puzzle has an unexciting look. If you fill that void with the missing word, then it has a redundant feel to it. It’s given me an idea for a similarly-themed puzzle, which I hope to work on next month. 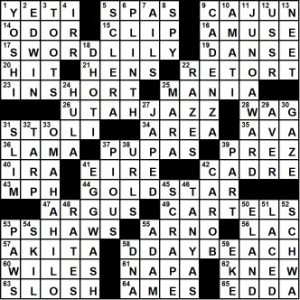 So, I didn’t finish well. The aggregation in the upper left of EDWIN (Drood),  YOSHI (the dino), and SWORD LILY had me guessing even after I’d figured out the theme. Yet and still, it’s one of the better D-Day themes of the week.

IN SHORT, nicely done! This cook learned about EGG WASH and DHOTI.

My least faves were PSHAWS, ARGUS, PUPAS, and TANYAS. 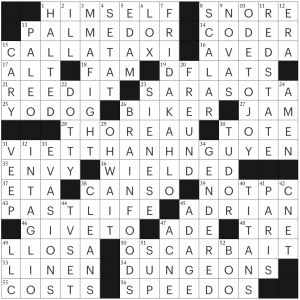 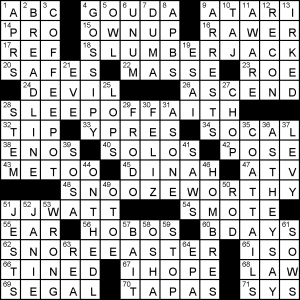 Unless I’m missing something, this is not the most ambitious addition theme ever. I see +S, but with spelling changes, except the first time. So: (S)LUMBERJACK, (SLEEP)LEAPOFFAITH, (SNOOZE)NEWSWORTHY (presumably people pronounce it snyooze?) and (SNORE)NOREASTER; and yes, using SNORE as an adjective is incredibly awkward.

Am I the only one who really struggled in the JJWATT, JANIE, ONTHEDL area. Finally recalling SEGAL unravelled things, albeit slowly. ONTHEDL is a synonym for ONTHEQT in my world.