Re-parse the title as “T Enders” and you have the theme. Certain well-known phrases have a T tacked on at the end. 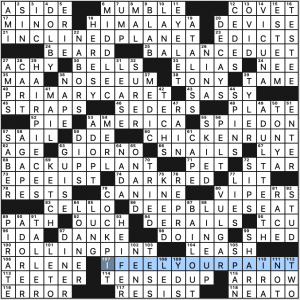 Nothing terribly exciting here, but it all works well enough. The last one gave me a chuckle as well.

Fill felt really smooth, it seemed to me. I didn’t have any real problem areas or hiccups. Best in show are HAIR PIECES, ADULT TEETH, BAIL OUT, MUMBLE, COCKPIT, and HIMALAYA, which we learned is [Sanskrit for “abode of snow”]. Oh, and also the dreaded NO-SEE-UM, the worst part about my time living in Mississippi.

Clues felt pretty straightforward, but there are a few worth noting:

That was good, eh?

Jim P here sitting in for Amy who is otherwise engaged.

And I get another lovely Saturday themeless to dig into, this one brought to you by Andrew Ries. 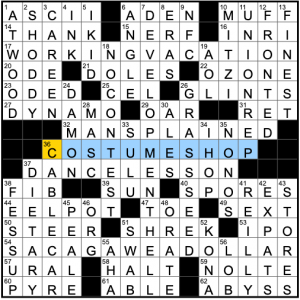 So much to like here…where do I start? Check out: WORKING VACATION, DEVELOPMENT HELL, MANSPLAINED, COSTUME SHOP, DANCE LESSON, SCAGAWEA DOLLAR, UNION REP, CABLE CAR, NO CONTEST, DYNAMO, “I KID“, and GRASS SEED. And about the only thing that I wrinkled my nose at was old crosswordese standby EELPOT. Oh, and ODED, too. But what a great signal-to-noise ratio!

Speaking of DEVELOPMENT HELL [Long gestation for a film, informally], I was in Target just yesterday and I saw a DVD of the film The Man Who Killed Don Quixote by Terry Gilliam. I knew this film was long in production (29 years!) and the last I heard it had been stalled, yet again. Little did I know the film actually got made (starring Adam Driver of Star Wars fame) and came out in 2018. I’ll have to check it out. The Wikipedia article for the film actually refers to it as “an infamous example of DEVELOPMENT HELL.”

Not much else to say about this grid because it was just so darned good. 4.5 stars from me. 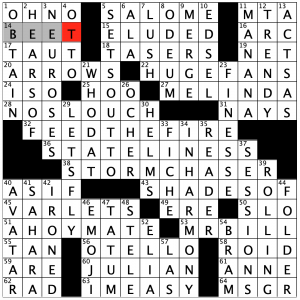 No time to wrangle the Downs Only for this one. I gave it a mini shot, but there are, as is usual for a Saturday challenge puzzle, a few Across entries that I surely needed the clues for. I don’t think I have ever met Brian, but he makes great puzzles. This one wasn’t too tough, but not too easy either. 4.1 stars today.

It’s a great weekend! Hope you can enjoy it wherever you are! 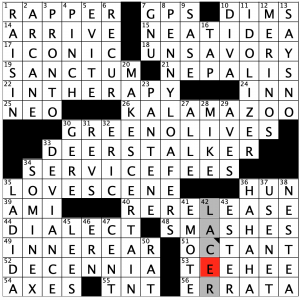 A great time for a Longo! I stared at a blank grid for a good 2 minutes, but then an answer or two fell in the NW corner, of all places, since it seems like that is where I usually finish. The stack in the middle doesn’t have anything too obscure, and I did have one error once the grid was it was totally filled. This Longo puzzle was an absolute joy to solve. 4.8 stars

Some faves, including a new word or two I learned:

I’m ready for next week’s Stumper!

When the moon hits your eye like a big pizza pie…

THEME: Moon phases begin each of the theme answers.

A nice open grid from the judge today. With 74 words, it yields some lively longer answers like PSYCH UP, TOENAIL, OLD GOLD (appreciate the hint that the brand rhymes…), AVOCADO, etc.

Solid theme idea with NEW, WANING, FULL, and WAXING. Two of the themers were hard for me to see: FULL PROFESSOR and WANING SECONDS. As I don’t watch a lot of sports, the latter of those may be more familiar to others. And in retrospect, I feel like I’ve heard the term FULL PROFESSOR before, but mid solve I had ?ULL PROFESSOR and I started to run the alphabet (didn’t have to go too far thankfully!).

The little 3-word stepladder in the middle is the only passageway connecting the top and bottom of the grid, making it feel like two puzzles in a sense. But both were fun solves, the south taking me considerably longer than the north.

Sorry for the late write up. I can almost hear Vic saying DO IT NOW! (9D [Advice to a procrastinator]).