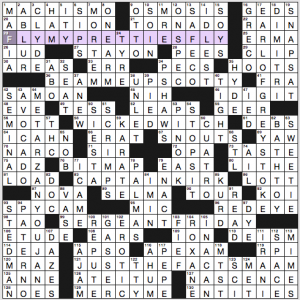 The theme is famous movie misquotes and the characters who supposedly said them. The quote/character pairs sort of meander around the grid a bit, not tightly paired by location.

Nice trivia set here, but perhaps not executed perfectly. What are your nominees for other movie misquotes? 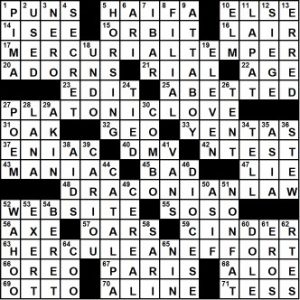 Theme: Well, what’s going on here is that four dudes from either mythology or ancient history are so famous that adjectives have been made out of their names. And ILSA’s have developed by adding nouns to those adjectives. Thus, Paul Coulter, with his MERCURIAL TEMPER, showing PLATONIC LOVE for his fellow word nerds, EXERTs HERCULEAN EFFORT … and (I dunno) spares us any DRACONIAN LAW.

WAHOO! ATTABOY, Paul! Thanks for not HORSING around.

Did you ever scan a grid’s fill for internal rhyme? This one has

LAP AT and NONFAT
I SEE the DMV
UNDO the STEW
GEO, OREO, and NERO are SO SO nearly rhymers, as are
EDIT and ABETTED
LIE  and TIED also are close.

I don’t know what it means.

The revealer’s in the center of the puzzle, appropriately enough: 67a [Keyboard centerpiece, and a phonetic hint to six long puzzle answers]. It’s MIDDLE C. 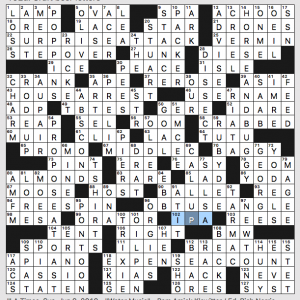 I’m not crazy about PROPOSE A TOAST. All the other theme answers are solidly in the language and consistent. It’s not a particularly entertaining theme but it’s perfectly fine.

What I didn’t know before I did this puzzle: that there’s a nurse named TRIXIE in “Call The Midwife,” and that Irving Berlin wrote a song called “I Love A PIANO.” This clip features a player piano very much like the one my parents had.

Challenging 20×21 puzzle today with both the theme and the cluing difficulty being “kicked up a notch.”

THEME: Types of “kicks” in soccer are separated from common phrases by being moved up a row.

My AHA moment came just now. Thank goodness. My initial description of the theme said this: The first half of theme answers are moved up, and separated from the second half of the theme answers by one row. I didn’t connect them with soccer at all. I was extremely distracted while solving, so that’s on me. 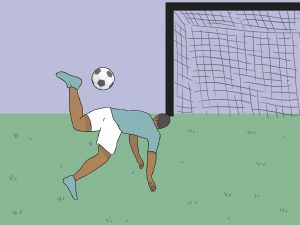 There’s a Wikihow article called “How to Do a Scorpion Kick” if you’re interested. I’d most likely break something.

Sounds dangerous. Perhaps having that one first in the themers is more risky than, say, PENALTY or BICYCLE? I dunno. All of the others sound more familiar.

That being said- I enjoyed this puzzle even though I didn’t get the entire theme whilst solving. That’s a testament to Evan’s prowess as a constructor. One should be able to enjoy a puzzle even if its theme has to do with a field (no pun intended) that is not in his/her wheelhouse.

Video Game Clue of the Week:

Great puzzle. I feel like apologizing for a sloppy solve.

THEME: Country capitals that sound as if they belong in common phrases.

Fantastic set of theme answers that work wonderfully together. I’d never heard of the Keto Diet before, but it’s definitely a thing and it didn’t take me long to KABUL TOGETHER that answer. SEOUL FOOD was definitely bound to be in this puzzle (and perhaps BERN RUBBER was handed to the constructors on a platter), but it was surprising how many other capitals’ sounds could be found in American vernacular. I particularly liked DUBLIN DOWN and TAPEI PERSONALITY.

Excellent grid to accompany and excellent theme with answers such as SEAFARER, NONE TAKEN, ID CHIP, and the great FUZZY MATH. Coulda done without USEABLE, but everybody is allowed a (var.) clue now and again.

Great way to start a Sunday.