If you don’t know Brad, you’re missing out. He’s an opera fan, tennis maven, crossword editor (The Chronicle of Education puzzles – if you’re not doing them, you should be!), baker, mensch-of-all-trades, and, oh, yeah, a constructor. I’m more accustomed to seeing Brad’s name on the fiendish Saturday Stumpers. Today he shows us that he can also create delightful easier puzzles.

I didn’t understand the theme until I got to the revealer at the bottom, and then I grinned. 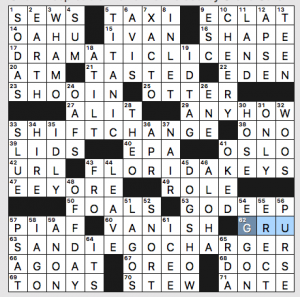 What do those things have in common? 56d [Where the endings of 17-, 33-, 43- and 63-Across are often found] is in a PURSE, and indeed my PURSE currently holds my LICENSE, some CHANGE, my KEYS, and a cellphone CHARGER. This is a 21st century puzzle! I love the fresh 15s, which I don’t recall ever seeing in a puzzle before. This theme is completely accessible for newbies and less confident solvers and still fun for us more experienced folk. Very nice.

What I didn’t know before I did this puzzle: that Steve Carell voiced a character named GRU in “Despicable Me.” 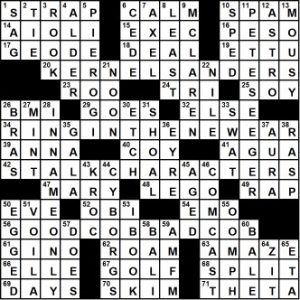 Fun theme here, from the editor himself. Not sure why he is both constructor and editor today. I think I will let this punny puzzle speak for itself, first listing clues and answers of the themers and then doing likewise with the best of the rest.

All in all, a nice array of corn pun (pone).

And now, the supporting cast:

When you solve and/or blog about puzzles every day, it’s easy to forget that there are always people discovering the joys of this hobby. Thus, there is always a need to have simple, straightforward themes on a Monday, even though many of us regulars might find them old hat.

Today brings us a synonym theme which we’ve seen many times over the years, but its simplicity makes it perfect for the newer solver. Each theme phrase starts with a synonym of “jump” (or with “jump” itself). 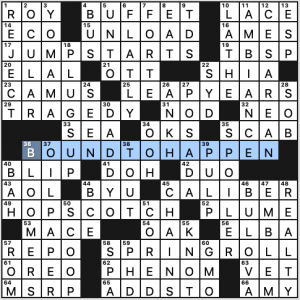 A good set, however HOPSCOTCH is problematic. In each of the other terms, the first word changes meaning, but in this one, it does not. An alternative possibility is HOP GARDEN, i.e. a field for growing hops. That’s not a phrase I’ve ever heard, but it does have a strong showing over at onelook.com.

Other than that little inconsistency, the theme is lively and clear without the need for a revealer.

Oh hey, I forgot to mention this appears to be a debut, and further, the constructor’s surname is Levy. Any relation to our very own Jenni Levi? Congrats!

The fill is strong with this one with AMBIANCE, CESAREAN, DADDY-O, SPOILER, TRAGEDY, BULOVA, CALIBER, and BLOOMERS [Bygone trousers for women] (though I really don’t think the clue needs “for women”). In fact, the more I look at the grid, the more I like it. Even the mid-length entries are good: BUFFET, CAMUS, PHENOM, POSADA, FORTE, PLUME, e.g.

And there’s very little in the way of gluey bits. I never heard of OIL PAPER [Translucent sheets], but those of you who have studied art probably have. And I don’t know that I’ve ever seen GMO [So-called “Frankenfood”: Abbr.] in a grid but I think it’s certainly crossword-worthy (and I like the clue, too). (Edited to add: It’s shown up about 10 ten times in different venues in the last five years.)

This is an impressively high CALIBER debut, and yet it’s still perfect for the crossword newbie. Four stars. 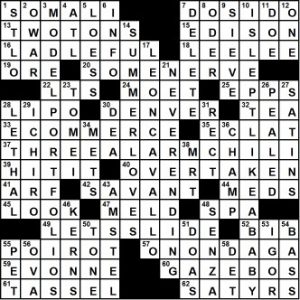 Starting my Monday with a 22-minute New Yorker crossword romp. Not too shabby. Sixty-eight answers, 12 of them 8-letters long or longer, 14 of them only 3-letters. A little green paint here and there, as New Yorkers tend to have. But, all in all, a fun solve, led by three 15’s, followed by three staggered 11’s down the center. To say nothing of a pot-luck mini-theme.

Other nice answers of (positive) note include SOME NERVE, E-COMMERCE, OVERTAKEN, LETS SLIDE, and ONONDAGA.

This power duo is back with another Monday LAT puzzle! 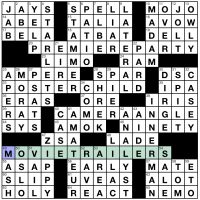 20A: PREMIERE PARTY [Opening night Hollywood event]
33A: POSTER CHILD [Recognizable face associated with a cause]
40A: CAMERA ANGLE [Photographer’s concern]
49A: MOVIE TRAILERS [“Coming attractions” offerings, and a hint to the starts of the answers to starred clues]

Movie PREMIERE, Movie POSTER, Movie CAMERA – all solid connections of words that “trail” the word movie, all derived from in-the-language themers. I’ll take it! The fill was largely okay, though I wasn’t excited about DSC LADE PARD ETO. Also, I’m torn on INNER MAN [Source of a masculine sense of self] – I’m all for explorations of gender identity in puzzles and like that this clue could apply quite broadly to anyone male-identifying, but I can’t imagine a woman-centered version of this fill / clue to end up in a puzzle and was sad about that. Prove me wrong, constructors!

Relatedly, Rebecca Falcon was on Twitter this weekend perfectly describing the sexism and exclusion of women that is so prevalent in crosswords. You should absolutely read her thread of tweets yourself. Here’s just one to capture your interest: 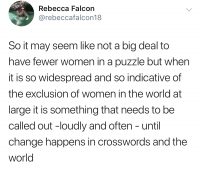 Squeaky clean themeless from BEQ today! Sure, there’s a bit of crosswordy glue in there (lookin’ at you ANI, ULT, and CHA who all decided to hang out together!) but for the most part, this is as smooth as it gets.

Really enjoyed this one!