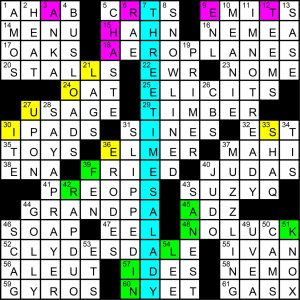 I had solved this grid on Thursday or Friday and had noticed a couple of things:1) GASX was the last entry across, and the four corner squares also spell that out. Seemed odd but like it was probably a coincidence. Then I also noticed 2) some oddly weak and easily fixable fill in the grid, which was more likely to be relevant — take square 39, for example. Why FEN and FRIED when a P or a D there would effortlessly rid us of an obscure word? And there had to be something going on in that central-left area, where ITE and ENA could easily have been excised as well.

I’d forgotten about all of that when I opened the puzzle this evening; in fact, I’d forgotten I’d solved it all. Was expecting to solve but there it was, fully filled in on my desktop. With fresh eyes I asked myself what “multiple” could mean instead of “many,” and then remembered that there was one long entry in the grid: THREE TIMES A LADY at 7d., clued as [Commodores hit with a multiplicative title].

So it’s the longest entry in the grid and dupes the title with the word “multiplicative.” So let’s look at the squares with multiples of three: lo and behold they spell meta answer ARETHA LOUISE FRANKLIN. I didn’t know her middle name until today.

Just 113 right answers with a few minutes left before the deadline, so this one played very tough. Not sure why — with “multiplicative” in the clue at 7-D and THREE in the entry, and then “Multiple” in the title, looking at 3, 6, 9, etc. seems like one of the first things you’d try. But not gloating — there are metas that you either see right away or not at all, so it looks like we’ve got one of those here.

4.50 stars. Fancy stepping to get all that theme in, and I like the musical tie-in with the Commodores song.