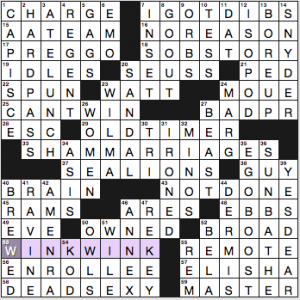 This is my first time blogging a puzzle by Caitlin Reid—Jenni had the pleasure of reviewing her previous themeless, an Inkubator puzzle I liked (and also her prior NYTs). I actually like this one even more. So much good stuff in the grid! And the clues were spot on.

My favorite entries are many: “I GOT DIBS!” “…NO REASON.” PREGGO. “CAN’T WIN.” BAD P.R., SHAM MARRIAGES (the [Actors’ unions?] clue is about a couple pretending they’re in love rather than actual thespians), and SEA LIONS. NOT DONE clued as [Simply taboo]. “WINK, WINK.” DEAD SEXY. “CAPISCE?” “HARD PASS.” A delicious MARG. EGO BOOST (nice little clue, [“I” lift?]). I like it when the puzzle talks to me in zippy language. (Note: Not a fan of spoken fill like SO AM I and AM TOO.)

Least favorite entries: Only MOUE popped out as one of those words I almost never see outside of crosswords. DAT is usually hardcore crosswordese, but here it’s clued [Informal object], a slangy “that.”

I don’t think I knew that [Pro QB Manning, by birth] was ELISHA rather than Eli. And I definitely did not know that [Reading Fightin Phils, e.g.] were an AA TEAM.

Overall assessment, this pupper earns 4.5 stars from me. 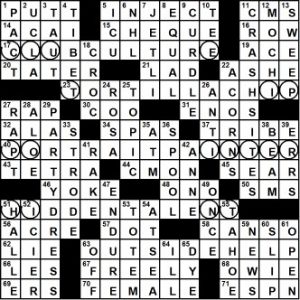 Erik and Wyna  are spreading synonyms through unrelated ILSA’s. Take a look:

That’s a lot of theme. Other than that, these items are noteworthy, two strong vertical ILSA’s:

Team Fiend’s own Erik “Slicks” Agard has today’s New Yorker puzzle. I did not find it easy and in fact had to resort to Google for one crossing, so yes, it’s another New Yorker puzzle full of names. This is their brand, and it fits their content. No complaints from me; I enjoyed it.

I would have known this was Erik’s even without the byline.

My sticking point was the crossing of 38a [Sparks power forward who was named W.N.B.A 23-Across in 2016]. 23-a is MVP. 38a is NNEKA OGWUMIKE. 39d was my Natick: [Actress Fox or rapper Thee Stallion]. I now realize I’ve heard of MEGAN Fox, and I’m blaming the post-op pain meds for my inability to figure it out even after running the alphabet. I do love Erik’s passionate WNBA fandom, which regularly shows up in his puzzles and his sartorial choices.

Some of what I liked about this puzzle: 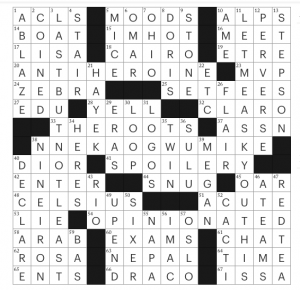 What I didn’t know before I did this puzzle: see above re: ZEAL and NNEKA OGWUMIKE. Also DORIS Payne, a real-life jewel thief and all the references to rappers. 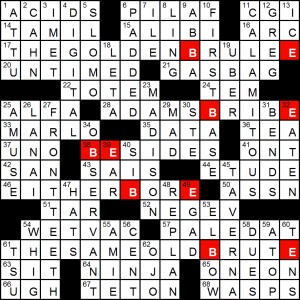 I found the bottom answers first, which misled me slightly as to the theme. I thought it was merely “add a B sound” based on EITHER(B)OR(E), however it’s a little more intricate. The central entry is (B/E)SIDES, and you encircle the final word of each answer with a B and and E. It is a refreshing variant on the frequently encountered letter addition trope. The best change was actually first, with RULE becoming BRULEE. The other two are RIB to BRIBE and RUT to BRUTE. THESAMEOLD(B)RUT(E) feels a hair made-up as a base phrase, but probably just lands on the positive side.