This was a whole lot of not fun for me. An inscrutable theme coupled with an abundance of crosswordese meant that the clues that were intended to be tough just became annoying. I pretty much just gave up after a while.

The theme takes long common phrases that imply anagramming a certain word. But you don’t know what that word is until you find that theme entry’s partner, the entry preceding or following it. That second entry gives a definition which is a synonym of the unknown word. But you still have to figure out what that unknown word is and then anagram that into another word which you put into the grid but which has no clue indicating what it is. Does that all make sense? Yeah, I didn’t think so. The problem is, unless you can think of this unknown word, crosses are almost no help to you. 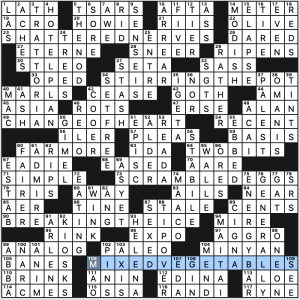 Like I said, trying to figure out this theme took a long time, and in the meantime I felt beset by crosswordese’s greatest hits: LATH, ACRO, RIIS, ETERNE, SETA, ENTRE, MARLS, ERSE, I GET A, READ A, COOER, RELO, ILER, EPISC, EADIE, TRIS, AARE, ANIM, AER, SRS, AN IN, OSSA, ONE ON. No doubt all of that is due to the fact that there’s so much theme material: six near-grid-spanners when you put the paired entries together. But suffering through that onslaught before understanding the theme meant that I was in a bad place for a very long time. And the a-ha wasn’t enough to lift me up.

There were some highlights though. TRATTORIA, ENERGY BAR, SENSEIS, SET FREE, TIP OVER, HELENA, TWO BITS (minus the shave and a haircut), and AGGRO [Belligerent behavior, to Brits] are my fave bits of fill.

I admire that this is something different, an attempt to change things up rather than present us with the same ol’ standard fare. Maybe if the fill wasn’t so rough I’d have been more inclined to go along for the ride. But with six pairs of themers, there are a lot of constraints on the grid. It strikes me that if it was reduced to five pairs (lose the first one, IMO), the fill would be improved and the solver would have a better overall experience. 2.5 stars from me. 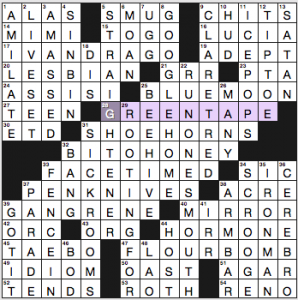 I learned a few things tonight. Apparently 28a. [Time-consuming environmental procedures] are called GREEN TAPE, riffing on red tape. And 4d. [Penalty box, in hockey lingo] is called the SIN BIN. (Congrats to the St. Louis Blues on their Stanley Cup win this week!) Apparently California has a Santa LUCIA Range, too.

Fave fill: LESBIAN in Pride Month. BLUE MOON (joining GREEN TAPE and CLARET RED in a colorful cluster). The verbs SHOEHORNS and FACETIMED. Classic candy BIT-O-HONEY (eww, hard pass) crossing a BEEHIVE.Cinematic IVAN DRAGO and CEREBRO. A protestor’s messy FLOUR BOMB. GOOGLE HOME and something I wouldn’t do when that thing was on, RUN ONE’S MOUTH. And I like seeing IRONMAN because my brother-in-law did his first IronMan 70.3 this past weekend (and finished!).

Not keen on the GANGRENE/SICKROOMS crossing, which is just grim. Crosswordese-ish OAST and AGAR, abbrevs PTA ETD ORG HUD IRR, the in-too-many-puzzles “AM I LATE?” 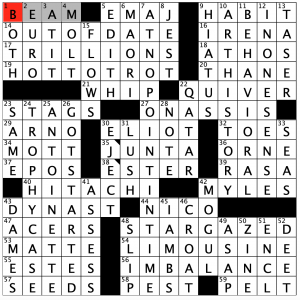 I don’t think I am quite in Craig’s wheelhouse yet; this one played a little tough for me than a usually Saturday LAT. Definitely no time for a Downs Only this week! I thought this was a phenomenal puzzle, with tones of fun and interesting entries that kept me engaged. Solving wide-open corners is also satisfying for the solver. This one gets 4.7 stars from me today. I loved it!

Some of what I loved:

I could go on, but I will stop here. Anxiously awaiting the next Craig Stowe puzzle! 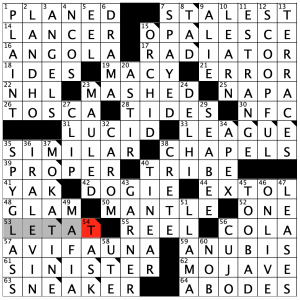 Not a bad time for a Wilber Stumper! I will gladly take it. I struggled a little at first, but then it slid to a solution fairly quickly. At least after the letter check I did, which resulted in all of the error marks in the grid! I think I am starting to see a change, after three years, of using my brain at work vs. manual labor. My brain is fried in the evening, whereas that wasn’t always the case. Lesson for me: solve in the morning! 4.5 stars.

One of those puzzles that (and I’m guessing I’m not alone here) I completed before sussing out the theme. The revealer with its extra hint seems to recognize that may be the case. I’m not sure I would’ve put it together without that nudge.

I’m guessing “FRUITION” does not complete any other common two-word phrase! Come to think of it, I don’t think I’ve ever heard that word used without “Bring to” in front of it. PASS would’ve worked as well- feels more familiar than BEAR in the “Bring to” sense.

Northwest corner took me the longest as CHAFF didn’t come to mind (I’ve heard the word, but still needed all the crosses). Smooth grid overall.