The latest meta contest puzzle from Francis Heaney, “Going Way Too Far”, had its deadline for submissions close at midnight. Here’s the solution!

For those not familiar, Wednesday’s puzzle was a Going Too Far variety puzzle, where entries would occasionally slip into the gray squares to spell out a phrase.  In this case, the puzzle is going way too far, with entries breaking over into other entries to spell out even more phrases.  I’ll let the puzzle instructions spell that out a little more clearly:

“In this puzzle, some entries are one letter too long to fit in their assigned space, and must extend into one of the grid’s gray squares.  Some other entries are two letters too long, and will break through a gray square and into the square beyond it.  Each gray square will be used exactly once, and the letters in them (reading left to right, line by line from top to bottom) will spell a clue to a final answer; the letters that break through the gray squares will reveal who’s responsible, and help confirm the final answer…” 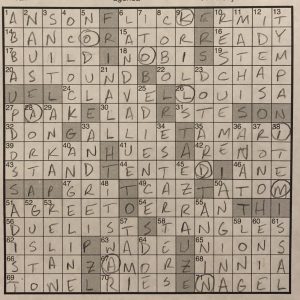 All settled?  Here’s the grid – there wasn’t a .PUZ file this week, so you’re stuck with my (mostly neat) handwriting.  I’ve indicated the entries that “broke through” with a circle — sometimes they do that going across, as in 10A‘s KERMIT (“Frog who drinks tea in a meme”), and other times they do that going down, as in 25D‘s OBEDIENCE (“It’s taught at certain schools”)

Once you’ve puzzled out how the answers slot in and utilize the gray squares, the message you get from those is FERRIS BUELLER SONG THAT IS APT TO THIS PUZZLE.

The following entries spell go one further than these entries, breaking into another entry’s space:

The letters stepping over their boundaries in the puzzle spell out KOOL-AID MAN.

He’s the one responsible for letters breaking through, and a song from the Ferris Bueller soundtrack is the final answer.  Putting both of those together gives only one thing: Yello’s “OH YEAH”

That about sums this puzzle up – the variety nature of its construction makes it hard to evaluate as a normal crossword, but I liked this one!  Side note: did you know there’s a whole market for trading vintage Kool-Aid packets?  The Takeout had an interesting deep dive on it.

Hope you enjoyed this one too!