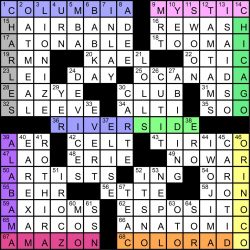 Hello there, everyone! How is everybody? The weather is heating up and it’s the perfect time to head into the water to cool down — assuming that you can swim of course, an activity that I have yet to perfect. Anyways, today’s grid gives you plenty opportunities to find some water to swim in, as each of the answers on the perimeter is also the name of a river, with the entry smack dab in the middle, RIVERSIDE, acting as the reveal (36A: [Today’s theme, as suggested by the eight answers on this puzzle’s edges]). Behold the river names in color!! (Thanks, Liz!)

First and foremost, much props to the people in Canada who engineered the altering of the lyrics of O CANADA that used to go “true patriot love in all thy sons command” and changed it to “…in all of us command” not too long ago, and I was proud to sing that any time a Canadian team came to town to play a game in the United States that I attended (25A: [Anthem played at Toronto Maple Leafs games]). And, yes, for some reason (probably all the hockey games I’ve attended), I know the lyrics to O Canada in both English and French! There were some real tricky crossings in the grid, especially, at least for me, the one that included BABKA (6D: [Sweet-and-yeasty Polish cake]) and KAEL, and it was a total guessing game in getting that last “K,” hence why it was the last letter that I was able to get in solving the puzzle today (20A: [Critic Pauline who said “Trash has given us an appetite for art]). This grid was made all the better by the addition of a fellow graduate of the greatest journalism school in the country, the S.I. Newhouse School of Public Communications at Syracuse University, in Mike TIRICO (43A: [Mike ___, host of NBC’s “Football Night in America”]). Oh, and the intersection of NO WAR (49A: [Peacenik’s message]) and IWO JIMA definitely stood out as well for its stark difference (44D: [Pacific battle site of WWII]). Going to go the hockey route with our next graph, but it does not have to deal with the first person to score 70 goals in a season in the NHL, Phil ESPOSITO (62A: [Hockey great Phil]).

“Sports will make you smarter” moment of the day: YEO (10D: [U.S. Navy enlistee)]) – As some of you know by now, the St. Louis Blues just won the 2019 Stanley Cup, led by interim head coach and former NHL Craig Berube, hired last Nov. 19 after St. Louis fired then-head coach Mike YEO, who also was a head coach in the NHL with the Minnesota Wild from 2011-2016.  According to Yeo, who now is an assistant coach with the Philadelphia Flyers, his surname comes from the word “Yeomen” and was shortened along the way during the evolution of the family’s ancestry in later years. 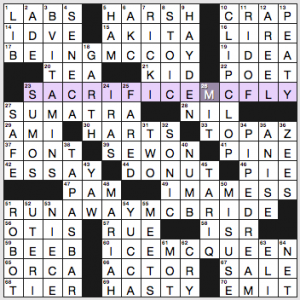 The theme felt maybe a little twisty for a Tuesday, maybe better pitched to Wednesday. What do you think? Familiar(ish) phrases get an MC added to the front of the second word, turning it into a surname, with the resulting phrase clued accordingly.

So the theme felt a bit spotty to me.

Fave fill: B VITAMINS, TAPAS BAR, PIPE DREAM. Unfave: AREEL, I’D’VE, ISR, ZEES, and ANISE. (What? I know ANISE is a legit word, but I hate the flavor.)

This—27a. [Neighbor of Borneo], SUMATRA—reminds me, I read an article in The Atlantic today and it was fascinating. Check out “What Really Happened to Malaysia’s Missing Airplane.”

Thanks, Ross, for giving us a heads up today!

THEME: Situations that require people to keep their heads up 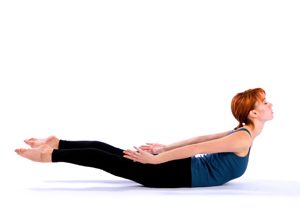 I like this set just fine. While this was another one where I didn’t figure out what was going on thematically until after I finished the puzzle and looked back, it seemed somehow different in a quirky way. “Situations that require people to keep their heads up” is just such an oddball theme description. I’ll take it.

Didn’t love a chunk of the fill- and this grid took a lot longer than usual to fill in (partly due to solving in the web-app rather than in Across Lite). DITS, RIRI, ARESO, ISI, FETE, MAL, MANU, LEW, THA, OSSO, ERY, OKRAS (plural?), the dreaded ULEE, and UPTO mixed in with other standard fill made it a bit of a grind.

** A previous version of this post said “FULL LOTUS POSE” instead of “LOCUST.” LOCUST works much better in the images! Sorry! 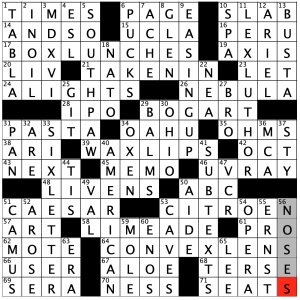 The flavortext says “a sizeable pair,” which happens to correspond to the size I wear now, which isn’t all that great, actually …

Yes, the letters XL are hidden in each theme answer, and I cannot squeeze into a Large anymore! I will be 50 soon, but I still think I can lose this 30 lbs!!! Still, another Jonesin’ gem this week. No obscure pop-culture this week, so there is sure to be something next week I have never heard of. 4.4 stars this week. 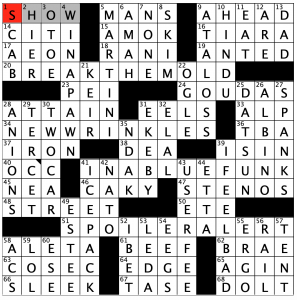 Didn’t try Downs Only this week; I had a busy weekend and didn’t feel like a struggle. This puzzle still felt like a slight struggle, and I even had an error! Easy theme, though. Revealer is the last themer:

Did you curl up your nose when you understood what the theme meant? Yes, mold, wrinkles and funk (!) can all denote something has gone bad. I suppose if nothing else this puzzle does a good job of evoking a word picture! Solid Tuez: 4.3 stars. Jeff has the Tuesday NYT too, so congrats!

That is all! Have a wonderful week!

Just in time for summer, we have some “Warm Fronts” on our Tuesday horizon… 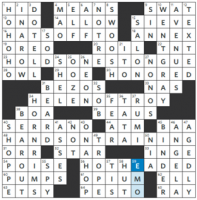 I’m warming up (zing!) to the idea of this puzzle and maybe would have liked it more than I do if it had some stronger theme entries; the first two themers don’t do it for me and seem forced/awkward. 23A especially seemed forced in to be symmetrical to the letter count of 48A. Either way, we’re used to seeing themes like this with two-word phrases, so I’ll give this puzzle points for the more novel three-word phrases / three-letter revealer word.

What did I enjoy?
– [Start or end for a fly?] for SWAT was clever as was [Biblical mounts] for ASSES. I was so ready to give this puzzle side eye for SINAIS or some weird plural like that.
– [Boyfriends] for BEAUS which, in Pride Month, I will only accept as two guys who are BEAUS of each other. Any other reading of this clue is officially non-canonical. : )

What didn’t I enjoy?
– HELEN OF TROY, Yoko ONO, ANGELA Merkel, NIA Long are the only women throughout the whole grid – fill or clues! I guess the puzzle gets some credit for having one of its themers be a prominently-featured woman but, seriously, compare that short list to allll the men in the puzzle (Jeff BEZOS, NAS, BEAUS, Bobby ORR, INGE, MAO, ALF, SHEL Silverstein, RUMI, and James Bond). I understand that it’s not always possible to cleanly include as many women in the grid, but I’d argue that each constructor can (a) include more women in their word lists so that they can be included when possible and (b) include more women in the cluing to at least get some representation!
– Also, [Trimmer’s target] for BEARD strikes me as the puzzle assuming a male solver, which I wasn’t as excited about.