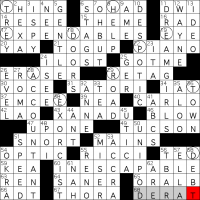 hello and welcome to episode #576 of matt gaffney’s weekly crossword contest, “At Movies”. for this week 2 puzzle, matt challenges us to find a Best Picture-winning film. okay, what are the theme answers? well, there are a ton of entries clued as movie titles:

it turns out that most (but not all) of these movie titles actually begin with “the”. this explains the puzzle’s awkward title, which clearly has a missing “the”. taking the first letters of the titles missing “the”, from top to bottom in the grid (circled in the screenshot above), spells out THE DEPARTED, the 2006 best picture winner that makes a very fitting meta answer to this theme.

it’s absolutely bonkers how many one-word film titles matt has crammed in the grid. by my count, there are 11 real theme answers, 7 red herring theme answers, plus TED which for some reason was clued as {Talk series} instead of the lowbrow seth macfarlane comedy about the stuffed bear. there are probably other fill entries that are also one-word film titles, because probably every word is a film title at this point (well, maybe not RETAG), but not prominent movies that caught my eye.

although i enjoyed the mechanic of the meta and there’s an impressive density of theme, i have to mention that the fill suffers somewhat. in addition to entries like RETAG and RESEE and DERAT, there were some unusual partials like SO HAD, OH BUT, and I AT, plus I SEE dupes RESEE. so there are tradeoffs, but overall i enjoyed the immersive nature of the theme. it might be a turn-off if you’re not a film buff, though, because you’d have to look up a whole bunch of these movies on imdb to see if the titles start with “the”.