This was a fun theme, assuming the solver is up on popular musical acts of the last 50 or so years. Peter took phrases where one of the words is also the name for a well-known backup band and used that phrase as a clue for the frontman or frontwoman of said band.

The grid uses left/right symmetry and all but one of the theme entries is in the Down direction, so the theme eluded me for a long time. But it all came together in the end. 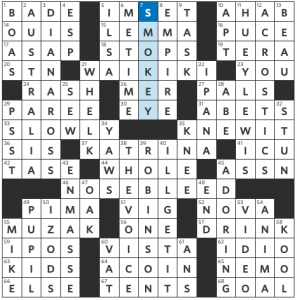 How about that for a crazy themeset? A 14-letter entry (SMOKEY ROBINSON), two 9s, a 7, and two 4s. I can see that getting symmetry out of these was quite a challenge. It’s pretty amazing that any was to be found at all, and getting KATRINA and ROBINSON to cross as well seems like a serendipitous stroke of luck. Quite a feat!

But because of the unusual grid design most of the Across answers were shorter and a touch on the rough side: OUIS, LEMMA, VIG [Bookie’s charge] (I still don’t know what that is), IDIO, A COIN. But there are a couple notable exceptions, namely WAIKIKI, NOSEBLEED, and MUZAK.

Most of the better stuff is in the Down direction, alongside the theme answers: AUSTRALIA, ME TIME, ACROSTICS, “THE VOICE“, and “I’LL GET IT“.

Notice that there are no other ? clues aside from the themers. No doubt this is due to the face that some of the theme answers are very short, and the question marks are their only identifying sign. Maybe it’s for this reason that the majority of clues felt fairly straightforward.

Despite initially being hard to find, the theme takes center stage here, and if you’re musically inclined, it’s a lot of fun. It might seem like a fairly simple puzzle to the solver, but from a constructor’s perspective, this looks like it was a tough one to pull off. I think it works really well. 3.9 stars.

On a personal note, I’ll be heading out on vacation for a couple of weeks to my ancestral home of Guam. Jenni will be covering for me, at least for the first week, but I may check in after that. Bye for now! 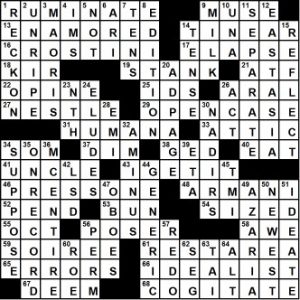 My alternate title for this puzzle is “Roget Squared.” Eight answers are clued using a single word from the title. The result is that all words on the grid’s perimeter are synonyms of said title word.

Constructors will appreciate the level of research that goes into a puzzle of this nature. Editors, I would think, do not see too many themes of this nature. Kudos to David for teeing it up.

In among the non-theme fill is some pretty fair stuff: 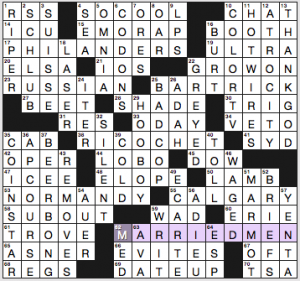 I enjoyed the theme, but would gladly have sacrificed the wide-open NE and SW corners and perhaps some of the theme if it would have meant getting rid of the stale fill. The theme revealer is 62a. [Bachelors no more … or, literally, the answers to the six starred clues], MARRIED MEN, and we’re talking about a two-groom couple in each case. Those six answers are words, plus one phrase, that can be split into two men’s names:

So a fun theme, and fresh, but not perfect. If you have some objection to a crossword running during Pride Month and celebrating MARRIED MEN, take it elsewhere because we are not here for that.

Worst clue: 25d. [Dark blue?], BAD COP. Can we not use “dark” to connote evil, please? Especially in the setting of so many incidents in which non-dark cops menace dark civilians.

Fill I liked: COINSTAR, BEER BONG, “HOO-BOY,” HOT-WIRES, “THANK GOD.” These things were offset by RSS, OPER, ITER, AUER, OMNIA, ECARTE, and the unexpected ADAH, 26d. [Wife of Esau]. I didn’t think LEAH was right, but filled that in off the AH. ADAH is a name I know only from The Poisonwood Bible, by Barbara Kingsolver. Adah was the character who was into palindromes, even though her name was a bit off from being palindromic. That name is likely quite unfamiliar to a great many solvers, and the obliquely clued crossing, 28a. [27-Across, e.g.], may have stymied them. (And that clue doesn’t really work. 27a is BEET. 27a’s clue is [___-red]. 27a is BEET, and I would not say that BEET is a SHADE. Beet-red is a shade, but I feel like “27-Across” refers more to the entry itself than the combination of clue and answer.) 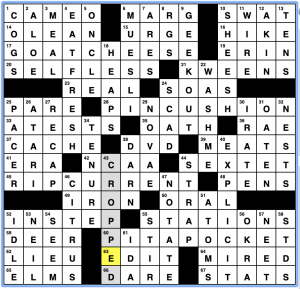 It took me a solid five minutes of staring at the grid and clues for this week’s theme to figure out what was going on and that’s five minutes more than it should have honestly taken.  Let’s take a look at those and then I’ll explain the weird path I sent myself down:

I blame the title on this one, which is very descriptive of what’s actually going on and I completely misread.  I kept trying to place “head” between the two words of each answer as a sort of before-and-after thing since PINHEAD is a thing.  Note that this doesn’t work for literally any other answer.  Instead, the first word of each clue can be interpreted as a popular acronym suggested by the cluing.  GOAT can be Greatest Of All Time (commonly applied to professional athletes), which makes sense for the “Best Limburger ever”.  PIN is Personal Identification Number (handy for the ATM), RIP is Rest In Peace (though I don’t love CURRENT as an answer derived from “circuit board”), and PITA is Pain In The Ass.

I made this one way harder on myself, but I still breezed through it in under 6 minutes, so the 2/5 difficulty rating is correct.  Other notes:

This was solidly constructed, but lacked a little of the punch I look for from the AVCX. 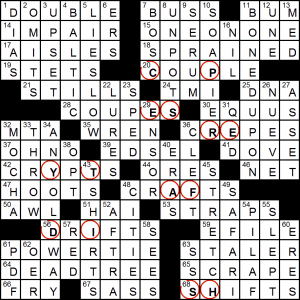 Mr. Rothlein gives us an unusual twist on a theme type we don’t see much any more – the word ladder. The twists here are it being a six letter rather than four, and it having DOUBLE/SHIFTS – two changes per rung. So DOUBLE to COUPLE to COUPES to CREPES to CRYPTS to CRAFTS to DRIFTS to SHIFTS. A lot of s’s make it functionally more a five letter ladder, but still.

Word ladders lack the interesting marquee answers of many other theme types. Their structure also typically makes it difficult to fit non-theme ones in. We do get ANYOLDWAY, POWERTIE and DEADTREE, all in that one bottom-left corner.