I’m filling in for Jim while he travels back to Guam and I sit at home with my slowly healing knee. I was surprised to see the time when I finished; it felt a lot longer than that. I didn’t suss the theme until the very end, and the NE corner was harder than it should have been. It was worth the struggle!

The title finally explained the theme to me. I thought it was word reversal or anagram; nope, it’s swapping M and R in the last word of each theme answer. 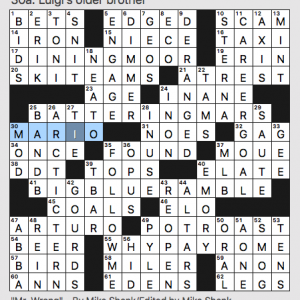 What I didn’t know before I did this puzzle: see above re: Bev Bevan. I also did not know that Ernie PYLE had a Purple Heart, or that MARIO is Luigi’s older brother.

This one is not blazingly hard and not particularly tricky, unless I missed something with the theme. Each theme entry is a well-known phrase with the first word morphed into modern slang. 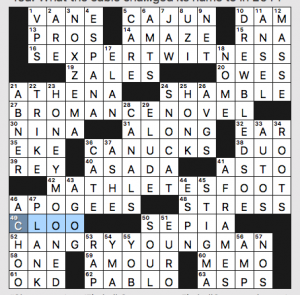 All the base phrases are solid, the slang is familiar to me, and the theme hangs together fine. It’s not particularly challenging or entertaining.

What I didn’t know before I did this puzzle: that the cable channel Sleuth changed its name to CLOO in 2011. 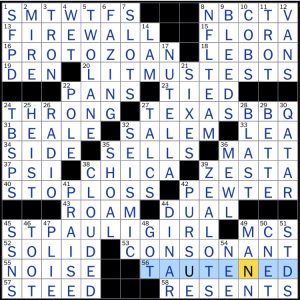 I applaud Trenton Charlson for constructing a grid where every entry, per 53A, begins with a CONSONANT, but the grid feels a little like a constructing exercise that’s not as much fun to solve.  Since other than that, the grid is basically themeless, let’s talk about it like a themeless.

This was just okay for me!  And that’s fine.  What did you think? 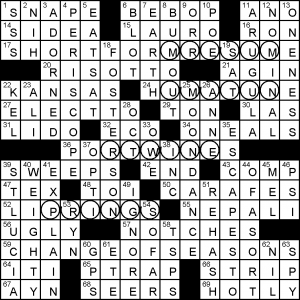 Simple enough concept with the winter solstice (summer for most of you) coming up – CHANGEOFSEASONS. The four seasons (opting for autumn rather than that dull American-ese Fall) are scrambled across two or more words in four theme answers. They’re quite chunky, which explains the infelicities of plural PORTWINES and HUMATUNE.

Remarks:
[Groovier part of a 45?], SIDEA. I don’t quite get this. I get that records have grooves, and that groovy is 60’s slang for “cool” but what makes side a groovier?
[Decide that one will], ELECTTO; [Preoccupies a lot], EATSAT; [Reaches after getting away, as a safe haven], ESCAPESTO – quite a lot of real estate given to those blah trailing preposition phrases.
[Quarterly Nielsen ratings periods], SWEEPS. This isn’t in my ken. 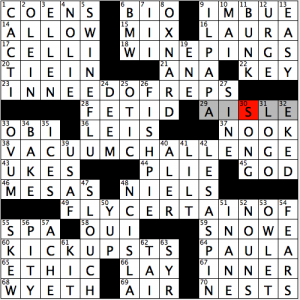 Late review this week, my apologies! We’ve got a hyper-current theme this week, playing on the 15-letter dangerous VACUUM CHALLENGE trend [Viral video trend that involves people wearing trash bags, and an alternate title for this puzzle]. Here, that’s interpreted as four phrases with the AIR removed (see 69a, [Thing sucked out during a 38-Across (and from the theme answers]):