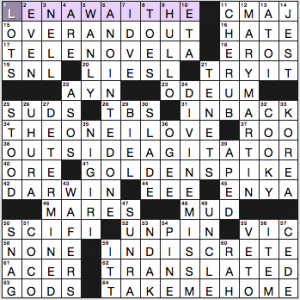 Stella recently got back into constructing after a lengthy hiatus, looking to include the sort of fill and clues she’d like to see in crosswords. (You can read Stella’s comments on the topic at Man Repeller.) And so it is that we have writer, creator, director, and actress LENA WAITHE right at 1-Across. She’s joined by other women in the puzzle: YA novelist Angie Thomas in the HATE clue, AYN Rand, LIESL in The Sound of Music, ENYA, Octavia Butler in the SCI-FI clue, NELL Gwyn (scroll to the Legacy section of her Wikipedia page to see examples of her wit), MARY MARTIN, the DIVINE MISS M, UHURA with Nichelle Nichols in the clue, Jessica BIEL, and drummer Kate Schellenbach in the COOKY clue. I know that Stella also loves ’80s music, so these three songs were not unexpected: “THE ONE I LOVE,” “TAKE ME HOME,” and “COOKY Puss.” I only know the first of these. 4d ARE is also clued via an ’80s song by the Go-Go’s.

I’ll ding the puzzle a bit for CMAJ, OGEE, and the dreaded NDAK, but they’re offset by the sparkle in the long fill, right on up to that OUTSIDE AGITATOR in the middle. 4.1 stars from me. 15a OVER AND OUT. 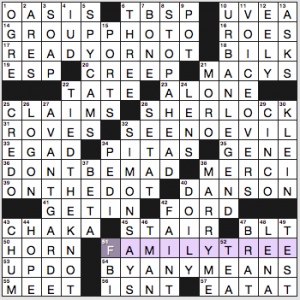 Another beautiful themeless from Robyn. There are 16 entries in the 7- to 11-letter range, and not a one of them is clunky, unfamiliar, stilted,or contrived. The shorter fill is almost entirely smooth—you can ding the puzzle for having both EAT AT and SET AT (and really, nobody says SET AT and it shows up in too many puzzles), but that’s about it.

Personal faves: GROUP PHOTO and its [Big shot?] clue. “READY OR NOT…”, [Words in hide-and-seek]. SEE NO EVIL. “DON’T BE MAD.” ON THE DOT. CHAKA Khan and LENA Horne. FAMILY TREE clued as [Something relatively complicated?]. The STOP AHEAD road sign. URBAN LEGEND. TIED THE KNOT and the Updike book MARRY ME—June is wedding season, after all. [How John Glenn orbited the earth in 1962] as a clue for ALONE. SIMON SAYS. [It’s in the bag] as a clue for TEA. The puzzle’s chock full of crisp fill and fresh clues. What more could you want? 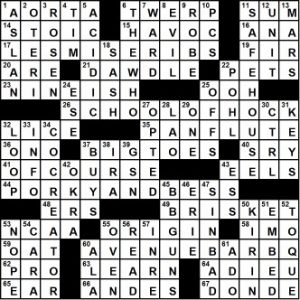 By Sarah McDaniel and Debbie Ellerin’s Universal Crossword, “Dinner and a Show”–6/21/19, solution

Hmm. Clever title, regardless of where it leads. I’m looking at punny clues that lead to answers that suggest Broadway shows and include consecutive letters that spell out a food word. But I am doomed to be somewhat disappointed.

Other stuff to comment on includes PAN FLUTE, OF COURSE; a SAFE HOUSE for each CO-CREATOR; and BB GUNS for THE WHO.

The New Yorker intends to have easier puzzles on Fridays “to ease us into the weekend,” and this one lived up to that billing. Lots of fresh fill, fun to solve, and not difficult. 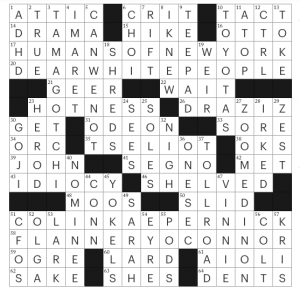 I like the diversity of this set, in every sense. HUMANS OF NEW YORK was started by a white guy, but the photos and stories are as diverse as, well, New York City. I appreciate Natan’s commitment to broadening the horizons of the crossword world. You can hear his take on this in this video from The New Yorker.

What I didn’t know before I did this puzzle: that the GOJI is also called the wolfberry, that VINNIE Colaiuta played drums with Frank Zappa, Joni Mitchell, Faith Hill, and Herbie Hancock, and that the eight-century poet Otomo no Tabito wrote a tanka called “Thirteen Poems in Praise of SAKE.” According to one source, a tanka is a Japanese 31-syllable poem, traditionally written as a single, unbroken line; according to others, it has five lines with 5, 7, 5, 7 and 7 syllables. Here’s a sample (in English).

I had no idea what was going on with this theme until I found the revealer at the bottom of the puzzle. This is a crossword for the specific audience of the Chronicle; since I’m not in academe, it didn’t appeal all that much to me. It’s well-done and was fun to solve. 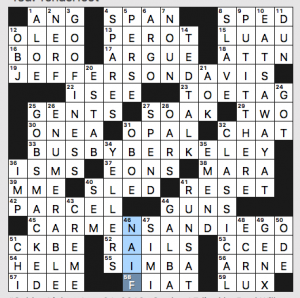 And the explanation: 58a [Wth 59 Across, Latin motto of the University of California, which can claim campuses in the cities ending the answers to this puzzle’s starred clues]. The UC system has campuses in DAVIS, BERKELEY, and SAN DIEGO, and their motto is FIAT LUX (let there be light). Solid, consistent, and probably amusing to UC faculty.

What I didn’t know before I did this puzzle: that JEFFERSON DAVIS had malaria, or that the OBOE had a cousin called the heckelphone. Here’s Heckelphone Party:

Filling in for Gareth, who lost power in a storm as he was solving the puzzle. I like this kind of theme – four answers with the same clue – and this one has two 15-letter entries. It’s an appealing grid. I’m not crazy about a couple of the answers, though.

All the theme answers are clued [That’s a wrap] 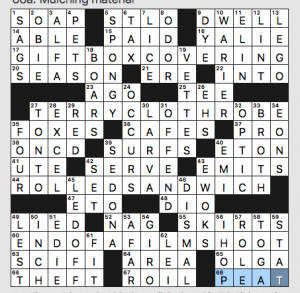 So two work, one really doesn’t, one sort of does. I like the idea of the theme more than the execution.

What I didn’t know before I did this puzzle: that OLGA Kurylenko was in “Quantum of Solace.”