This is a fun theme! The title can be parsed as “ter minus” and indeed each theme answer is minus a “ter” at the end. 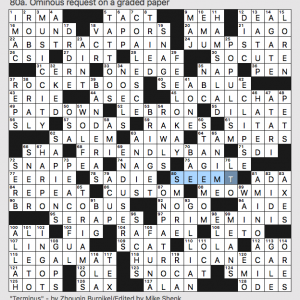 I like this theme. It was fun to solve, though not difficult, and all the base phrases are solidly in the language. This is no surprise; I’m a big fan of Zhouqin’s work.

What I didn’t know before I did this puzzle: that Sophia LOREN won an Oscar for “Two Women.” And now “Cabaret” is in my head…. 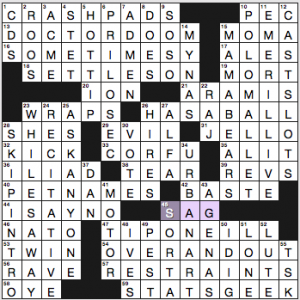 I confess I didn’t really enjoy this crossword. I always hope to relish the Saturday puzzle, but sometimes it doesn’t pan out. I struggled to fill in the southwest quadrant, but there were things that bugged me throughout the grid. Long entries I wasn’t wild about include SOMETIMES Y, HAS A BALL (that present tense feels weird), “I SAY NO” (feels a bit contrived), STATS GEEK (is that a thing?), lifeless POLO MALLET, and dated EMERIL LIVE (the show ended in 2010, who cares about it now?). Shorter fill that irked: tiresome ADMEN, STET, ALFA, HIRES clued as HI-RES (Where are my Google Ngram experts? I’d love to see the numbers for hi-res vs high-res), AGENAS (!), and “I DIG” (which nobody says).

In the plus column, we have PET NAMES (though I’m not wild about the clue, [Handles with care?]), TIP O’NEILL, “OVER AND OUT” (which was just in Stella Zawistowski’s Inkubator themeless a day ago), WHILES AWAY, PRILOSEC, and the delightful MAMA BEARS. 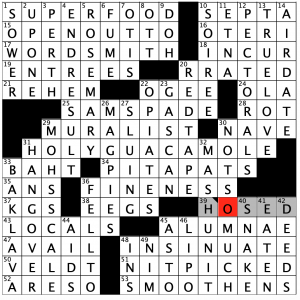 I didn’t even try the Downs Only on this week’s LAT Saturday; perhaps I should have, since I flew through this one! I found this one a lot of fun, but I think that is usually the case with a Julian Lim puzzle. I have seen his byline quite a few times, and his puzzles always seem to be interesting. A few of these entries made me smile or even chuckle out loud for a moment, so that feeling is always nice. A solid 4.6 stars from me.

Some of those funny spots, and other things:

I’ll be back for another LAT puzzle on Tuesday. 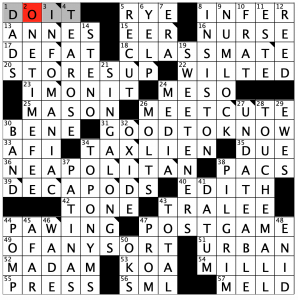 Consider me truly Stumped on this one. I found this quite difficult. A lot of solving these difficult puzzles, at least for me, is getting into a quiet zone where I can actually think, and that wasn’t really the case here, but I don’t think it would have mattered for this one. Here is hoping next week is a LOT easier! But Matthew, whom I would LOVE to meet, makes great puzzles, and this one is no exception. Lots of toughies in this one, but if you’re a Stumper solver, then you anxiously await the agony this one will provide. You can see all of the error marks in my screenshot. Ouch. 4.5 stars, though!

Four solid entries in a tight theme. Can’t ask for more than that! Except, of course, you can… by asking for fun fill. Zhouqin’s grid succeeds big time there too (did you expect anything less?).

RATS NEST, DANA CARVEY (nice throw-backy entry without feeling dated), BAHAMA MAMA, NITWIT, ESCARGOT. Not much SHIITE in this grid at all.

Enjoy your Saturday- speaking of competitions, I have to drive my nephew to his all-star little league baseball game.