Car models and crosswords. A match made in heaven.

THEME: Common phrases that contain a car model reimagined as if the car belongs to a celebrity.

After last week’s (very) impressive meta, I was expecting something light and over-the-plate in the cycle. And that’s what this is: a fun, mostly easy puzzle with wordplay on car models. 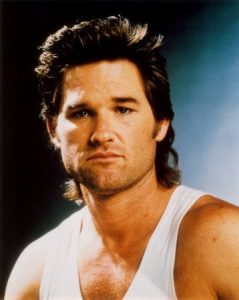 Clued for his mullet, not his car. Click here for more mullet fun.

The theme works best if you don’t overthink it. If you do, the connection between the person in the clue and the answer might leave you somewhat confused as they aren’t entirely consistent throughout. For instance, Joan Baez is a FOLK LEGEND. But Graham Bell isn’t a PHONE CHARGER. He is associated with the phone, of course. But LUNAR, being an adjective, throws off that line of thinking for Armstrong. Hubble feels associated with the whole answer as he was on a GALAXY QUEST of sorts, and Horowitz has certainly played PIANO SONATAs, but I doubt Cousteau had much interaction with WATER BEETLEs, though he was certainly interested in WATER.

And there ya’ go. I just overthought it. Tsk tsk. It’s not the kind of puzzle that deserves those kinds of analytics. Evan’s predecessor, Merl Reagle, never cared about that level of cohesion either.

Mostly standard fill- lighter on the puns than usual imo- but still some good stuff like:

I must be off in my Jeep Patriot… hmmm… [Jeep driven by Samuel Adams?] NEW ENGLAND PATRIOT. That works, right? 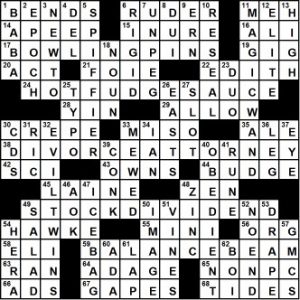 Hmm. We have here a couple of consummate pros, who happen also to be friends of mine, whom I met through ACPT 10 or more years ago. And, with this puzzle they do not disappoint. Starting with the clever title, which portends a repeating word in the theme clues, one of my favorite gimmicks:

Other good ILSAs include MAGIC WAND and EVIL TWINS, but the fill is excellent throughout and the clues entertaining. 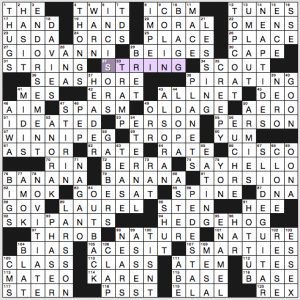 Hey, it’s my Minnesota homeboys, the professors, with a nifty theme I don’t think we’ve seen before. There are eight sets of identical twin entries in the grid, with the first one being clued normally and the second one’s clue leading to a phrase in which second precedes the word in the grid, and the answer doesn’t match the clue unless you mentally insert second.

If you’re going to repeat a noticeable word in the grid, it had better be in the service of a theme. Smoothly executed theme here.

The fill was decent, with SLIDE GUITAR, Don GIOVANNI, HEDGEHOG, and SAY HELLO bringing some zip to the venture. A few clunkers like STEN were in the mix, but overall it wasn’t a grievous slog to work through the 21x grid so I’ll call it a win. Four stars from me.

I found that after googling “a stew sir” in quotes, which of course no waitress has ever said before. Also, am I the only one who hears a distinct Cockney accent when reading “A stew, sir?” I’ve worked in restaurants for well over 20 years now. I think I’m going to make it my goal to say that phrase at some point. With the Cockney.

Pretty cool to see JIM ACOSTA in there (though I’ve been calling him Lacosta I think. Whoops). Especially symmetrical to LOCAL NEWS. Too bad those aren’t anagrams of one another.