I usually love Ross Trudeau’s puzzles, and I was a bit disappointed in this one. The theme idea is fun: “afflictions” that are idioms that sound medical. One of the theme entries didn’t quite work for me and some of the other fill clanged a bit. 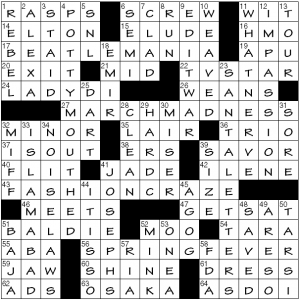 What I didn’t know before I did this puzzle: that there are more than 2 million people living in OSAKA.

I leave you with ELTON singing at the funeral of LADY DI.

Ari Richter and Jeff Chen’s Universal Crossword, “You Are What You Drink”—Judge Vic’s write-up 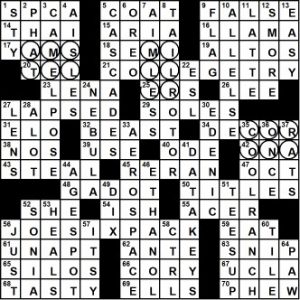 Ari Richter and Jeff Chen’s Universal Crossword, “You Are What You Drink”–6/24/19, solution

So, this title suggests alcohol. And the grid contains three asymmetrically-placed sets of circles–could it be that they are intended to suggest six-packs of beer? The reveal says it all, in a way:

A very nicely executed theme, accentuated by the six-packs of AMSTEL, MILLER, and CORONA!

My one nit is UNAPT, for the obvious reason, but it’s outweighed by this really nice stuff in the vertical answers:

Mike Schlossberg’s Wall Street Journal crossword, “You Can’t Have Too Much Insurance”—Jenni’s review

The theme is phrases that evoke something that might generate an insurance claim. There’s no mention of Sheryl’s she-shed. 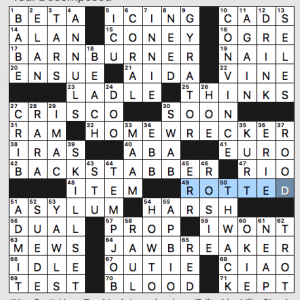 I like this theme a lot. It wasn’t difficult but it was fun to solve and amusing.

Answer I knew because I have a teenager: 14a [Country singer Jackson] is ALAN. She’s the only one in the house who listens to country music.

This was tougher than the last few New Yorker Monday puzzles. That is not a complaint. I love a good challenge, and I love Anna’s puzzles, and this one did not disappoint.

The NW did not fall easily – it was the last part of the puzzle I filled in, so it kind of felt like I was solving it backwards. 1a is [It could be credited with the popularity of crosswords among millennials], and the answer is NERD CULTURE. This sounds plausible to me and since it’s phrased in the conditional, you can’t really argue with it. It’s also a great entry.

I got a toehold over on the east side of the puzzle with 28d [Creator of the Pevensie children], C S LEWIS, and worked from there in no particular pattern. Things I liked a lot: 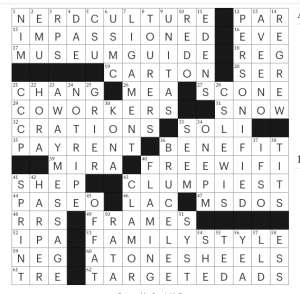 What I didn’t know before I did this puzzle: that C-RATIONS are [Canned, pre-cooked meals for GIs].

I’ll start by saying that my last answer to fall in this grid is so absurd that I enjoyed it. That would be TAPE PLAYERS clued as [Decks that might be used during some barbecues]. In order to attend that barbecue, you’d likely have to time travel with MCFLY (not MARTY as I originally entered).

Really, really nice long answers in this one all around.

And knowing BEQ’s puzzles, I didn’t have to think twice about the answer for 68A [Crack spot]. ASS. 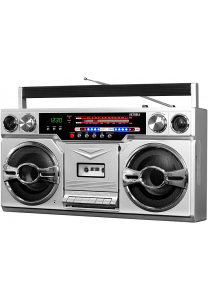 Leave the bluetooth speaker at home.

BREW CREW and EARPLUG were nice to uncover as well.

This puzzle had an obligation to make up for the abbreviated December plural (DECS). And it certainly did.

This powerhouse duo strikes again with another Monday LAT: 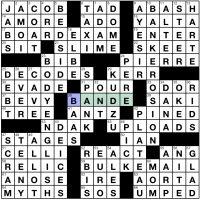 17A: BOARD EXAM [Medical licensing test]
10D: BANK EROSION [Wearing away of a riverside slope]
59A: BULK EMAIL [Online mass marketing message]
23D: BODY ENGLISH [Torso-twisting “spin” that has no effect on the ball]
38A: B AND E [Burglary, for short … and a hint to this puzzle’s four longest answers]

Is that revealer technically correct? Is it burglary every time you break and enter? That seems off to me. That, coupled with the fact that I’ve never heard breaking and entering simply called B AND E made this puzzle slightly less enjoyable for me to solve. The themers also had varying levels of being in-the language: BOARD EXAM for sure and maybe even BULK EMAIL, but BODY ENGLISH feels old-timey and BANK EROSION seems like it’s there to balance out the symmetry of BODY ENGLISH. It all fits the theme, but it’s not my favorite of their puzzles.

Other random thoughts:
– To my knowledge, I’m not related to PIERRE [Cardin of design], though wouldn’t that be nice!
– SAKI felt like a stretch. Why not SAKE / REDS there? And eek at NDAK. Bret HARTE who??
– Are Deborah KERR and DANA Delany the only women in this grid aside from icons Judy and Liza? Compared with alllll the men represented in this grid? Oof.