Take one what? When? I solved the grid, then got bogged down in work stuff and vacation planning, then realized I needed to write and schedule this post earlier than usual because road trip, so asked for the teeniest of hints to get a move on. 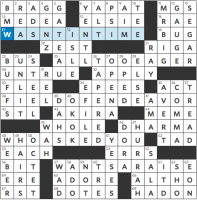 We’re looking for a five-letter noun, and we have five themers, with no apparent referential connection:

Well. As stated above, I futzed around a bit, then began to worry that I would post a review that WASN’T IN TIME, so I was ALL TOO EAGER to ask for a leetle hint. It was kindly suggested by metapal Jesse that I focus on the first letters of the words in the themers (WHO ASKED YOU, Jesse? Oh, right: I did). And that broke the whole thing open in this here FIELD OF ENDEAVOR. (Yo, Amy? If I’m gonna keep blogging these, I WANTS A RAISE!)

So if we look at the first letters of themers, we get words. And those words just happen to have homophones in the clues:

What entries do those clues clue?

Take the first letters of those entries and you get B – O – U – G – H, BOUGH, which is a five-letter noun, and our answer. Wait, how does that relate to the title? BOUGH is a homophone for BOW, and “You’ll Take One Soon” — that is, once you’ve solved the puzzle. Vary gneiss, Matte! Eye doug. Ewe?

Sure, [11d: Carrie’s “Sex and the City” love]: MR BIG is a character played by Chris Noth on HBO. But those of us who came of age in the early 90s will never forget that dramatic key change. When is someone’s college a cappella group going to revive this song?