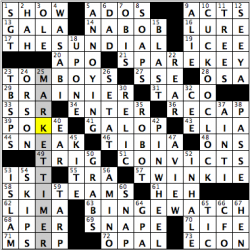 Good day, everyone! Hope all is well and that you’re enjoying these long days at the beginning of summer. Speaking of following along these long days, it wouldn’t be a bad idea to have something to keep track of the time. Fortunately enough, there are four of those time-tracking instruments embedded within the four longest answers in this puzzle!

There were not too many things in this grid that you could say were ANNOYING about it, as this was a pretty smooth solve except for learning about the phrase “market timer” for the first time (5D: [Like a loud cell phone user in a movie theater]). It took until the final season and paying attention to the characters of the Game of Thrones before I knew a) who Arya Stark was and, b) realizing that her character would fall in line with that of TOMBOYS (23A: [Girls like Arya Stark of “Game of Thrones” and Jo March of “Little Women”]). Apologies for being one of the seven people you know who just did not follow GoT throughout its glorious run on HBO. Probably favorite fill of the day was SPARE KEY, something I now have to make since my mom and brother recently bought a new house in Queens (21A: [Dupe under a doormat, perhaps]). At the very least, I did get to see one of the two Broadway hits mentioned in the clue to SHOW (1A: [“Hamilton” or “Wicked”]). I won’t tell you which one it was, but I’ll give you a hint: it wasn’t Hamilton! I don’t have an arm nor a leg to spare, nor do I keep company with high-end clientele with connections and/or deep pockets, to ever make that happen!

“Sports will make you smarter” moment of the day: KITE (45D: [Wind-drive toy)]) – One of the best golfers of the 1980s and 1990s, World Gold Hall of Famer Tom Kite won 19 times on the PGA Tour and finished in the top two of each of the four major tournaments at least once. The highlight of his career was winning his only major, the 1992 U.S. Open played at Pebble Beach, which just so happened to host this year’s U.S. Open a couple of weeks back. 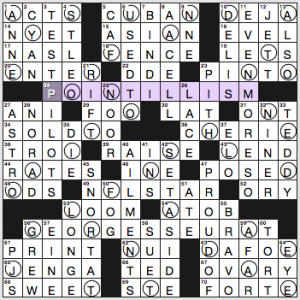 Not much in the way of wordplay or whimsy here. We’ve got two theme answers, POINTILLISM and GEORGES SEURAT, and if you read all the circled letters in order from top left to bottom right, they spell A SUNDAY AFTERNOON ON THE ISLAND OF LA GRANDE JATTE. When you want those 42 letters to show up in certain entries, well, it constrains the fill to a degree. (Not wild about inactive NASL, DDE, AN I, LAT., ONT., TROI, -INE, NFL STAR, ORY, A TO B, ST. LEO, AA CELL, LONG E, and Koh-i-NOOR, for example.) I guess the circled letters are supposed to evoke the way Seurat’s profusion of dots cohere into a picture—POINTILLISM is clued with [Technique employed in the painting hidden in this puzzle]—but letters in rows are too different from colored brushstrokes.

2.75 stars from me. I love the painting, a hometown favorite at the Art Institute of Chicago, but the puzzle wasn’t up my alley. 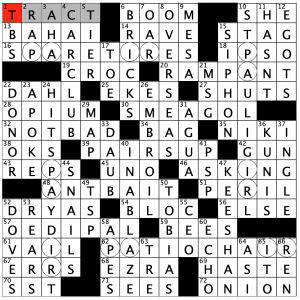 I had a quick time on this week’s Jonesin’ puzzle; I think I got a good night’s sleep! The flavortext invites the solver with the phrase “let’s get together.” The circled letters help in this case, as does the revealer at 39A:

So the four letters in the work PAIR that appear in the theme answers have all, indeed, “paired up.” This puzzle also appears to hav been a fun exercise in brainstorming these answers; I think ST. PAULI GIRL is by far my favorite. Another stellar puzzle by Matt: 4.3 stars this week.

Another Jonesin’ coming next week, which is a holiday week! 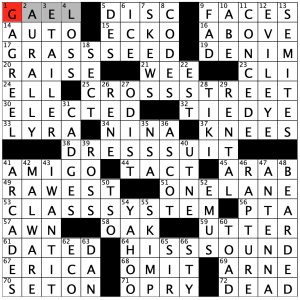 My time for the Jonesin’ and this LAT were exactly the same: 3:33. Perhaps it is a sign. If I was interested in numerology, which I am not. This theme seems slightly sinister, though. You’ll see what I mean:

An ideal theme for a Tuesday, even if it is slightly sinister sounding! Lots of S sounds in here, so if you have a lisp, you may not find this puzzle fun to talk about! In my opinion, it didn’t Tuez. 4.2 stars.

Have a great rest of the week. See you on Saturday.

To whom are we saying goodbye in today’s puzzle, “Parting Notes”? Let’s find out! 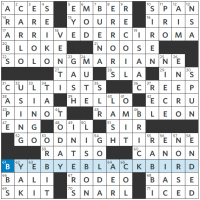 Each of the themers says farewell in its own way and we had some nice entries of 14- and 15-letters, which I appreciated. I appreciate the inclusion of women in the themers though both are men singing to/about women, so there’s no agency for the women here (nor would it pass the equivalent of the Bechdel test). The part that seemed like an odd choice by the constructor or editor was which lyrics were referenced. For a puzzle called “Parting Notes” you’d think the lyric included would mirror the farewell message; instead, we get a seemingly random lyric from each song. Sure, the lyric helps identify the song, but it otherwise feels inelegant.

Random thoughts:
– What other women do we have in the grid? Patty Hearst (abducted = no agency), SIREN (villainized in myth), generic NIECE, GOLDA Meir (solid!). Compare those few women with all the men in the grid, include BLOKE and SIR (to refer to two men!). There could stand to be better representation of women in this puzzle, even by cluing other words in this grid though the lens of influential, powerful, or iconic women.
– I’m going to push again for constructors to remove NOOSE from their wordlists. Its history in America is steeped in racism to a degree that it feels unreasonable to include it in a puzzle meant to be a fun, inclusive activity.
– Otherwise, the puzzle felt straightforward? There wasn’t much in the grid to make it feel modern (mayyybe ELI Manning?) and enough of the 3-letter fill was meh enough (SLA ENG TAO/TAU SLR COL REL AER) to make the puzzle not as exciting as it could have been.

Something that felt a little different about this one today! Perhaps it’s the left/right symmetry. Perhaps it’s the long non-theme answers. But whatever it was, I liked it. Played like a themeless, and at only 73 words, it’s pretty close to a standard themeless count.

Usually it bothers me when some non-theme entries are just as long as (or longer) than theme entries. Perhaps this would’ve irked me solving in the web app. But with circled letters in the .puz version for Across Lite, the theme answers were clearly differentiated. Nice fill included ACE VENTURA, RADIO METER, CORNER LOTS, and REIMBURSES.

Since the longer across answers (ANTELOPES and AFRICAN AMERICAN) are running the opposite way, that’s not a bother either.

Anyone else notice CAF and AA CELL are in there, clued the same way as in today’s NY Times, and with the same proximity to one another? Eerie.