Note to the Fiend community: Joon is in France with his family watching the Women’s World Cup, so Laura is subbing for the next two weeks with the collaboration of her meta-solving (and general fun-having) group, the Solid Puzzle Friends.

This week’s contest answer is an 11-letter word. 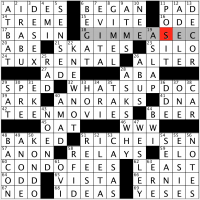 [18a: “Hold on”]: GIMME A SEC
[24a: Common prom expense]: TUX RENTAL
[32a: Third highest-grossing film of 1972 in the U.S.]: WHAT’S UP DOC? (The first and second highest-grossing movies that year were The Godfather and The Poseidon Adventure. Fourth was Behind the Green Door [a pornographic film] and fifth was Deliverance. 1972 was a very strange year for moviegoers.)
[42a: “The Breakfast Club” and “Mean Girls,” e.g.]: TEEN MOVIES (The Breakfast Club was the 16th highest-grossing film in the U.S. in 1985; Mean Girls was 28th in 2004. Many Gen-Xers use The Breakfast Club’s characters as a personality-test proxy; for example, Laura (INTJ) is an Allison/Brian.)
[51a: Longtime co-host of the late Stuart Scott]: RICH EISEN (Scott and Eisen were anchors on ESPN’s SportCenter)
[60a: Costs for landscaping, maintenance of common areas, etc.]: CONDO FEES

The first thing we noticed here is that all of the themer entries include a word that has been shortened to just its start (hence the puzzle’s title), like so:

So if we just take the first letters of each of those missing parts we get OETAAM which is … um … okay, let’s try something else. A common MGWCC move is to relate some part of a word or partial word suggested by the themers to corresponding entries in the grid, and that’s what’s going on here: if we add a letter to each missing ending, we get an alternate answer for the other entry on that row, like so:

Taking the added letters in order we get PRELIM, which is the start of PRELIMINARY, which is an 11-letter word and our answer and also one way to gloss the puzzle’s title, “It’s a Start.”

Lots of fun almost-pairs crossing each other in here, including BEGAN/BEGAT, EVITE/EVITA, CONDO/KONDO ([50d: Joyful Marie]) and GIMME/GIMEL. And if you think that didn’t inspire us to start writing our own ABBA parody song “Gimel! Gimel! Gimel!” then you don’t know us very well.

Well, as Joon would say, that’s all for us. How’d you like this one?