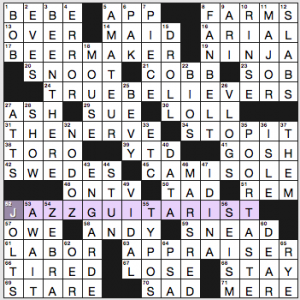 Seeing Zhouqin’s byline typically means “here comes a good crossword,” and this puzzle is no exception. It took me awhile to make sense out of the theme—I had parts of the first three themers filled in, no idea what to do to complete them, and it finally clicked as I filled in 63a. [IRATE], APPRAISER. How on earth does the answer fit the clue?? Read the clue as “I rate,” and the APPRAISER is one who might thusly describe what they do. The other three use different pronouns:

That [HEBREWS] clue led me astray on the heels of 1a BEBE, which also contains no vowel but E. Two long entries nearby are “BEEN THERE” and “THE NERVE!”, also with those E’s (and also great entries).

I was in the perfect mood for this theme. It’s silly and amusing and fun to solve.

Each theme answer is a job description for produce. 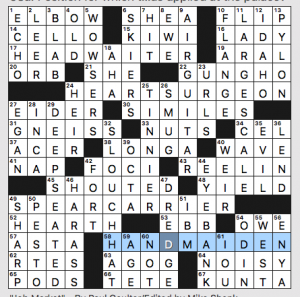 It made me giggle. That’s a good thing.

What I didn’t know before I did this puzzle: see above re: a HAND of bananas. I also did not know that Inspector Gadget says WOWSERS or that the Australian army wears SLOUCH HATs. 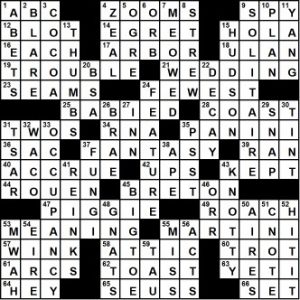 THEME: Put the word double before eight words in this puzzle, and you’ll created eight ILSA’s.

FACT THAT CANNOT BE DISREGARDED: There are lots and lots of ILSA’s that start with double.

I was neither wowed by nor bitterly disappointed with this puzzle. 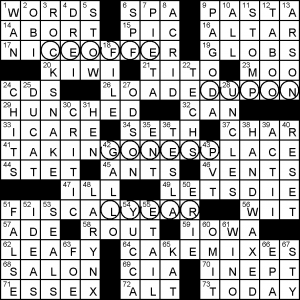 Thank you Dr. Levy for filling in last Friday. The wind/rain storm took out the entire town’s (actually a couple of towns) power supply for six hours plus which put paid to blogging…

CAKEMIXES – as a revealer it works – but it is yet another “scramble letters and span them across words” theme. I feel like we’re getting far too many of these of late? Anyway, the cakes are COFFEE (which has no coffee if you’re American???), POUND, SPONGE and LAYER. Even the most boring theme can be spiffed up by interesting entries. None of NICEOFFER, LOADEDUPON, TAKINGONESPLACE or FISCALYEAR fit that bill for me either. Sorry to be such a downer. 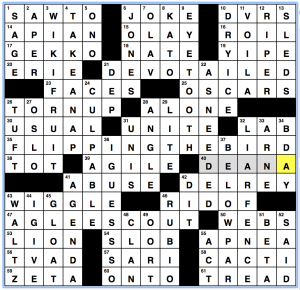 This week’s AVCX is from Erin Rhode, and it’s a pretty straightforward 3/5 difficulty theme:

The FLIPPING of BIRDs in the grid is cryptic-style anagramming rather than a straight flip of the word, so we have common phrases (DOVETAILED, EAGLE SCOUT, KIWI FRUIT, and RAIL FENCE) where the name of a bird has been anagrammed in an amusing way.  It’s fine?  It’s fine.

The rest of the fill in the puzzle is of a similar sort.  There’s personal details in some of the clues (“Carter whose “Did I Shave My Legs For This?” album was a mainstay in my high school car” for DEANA, “Formal wear I considered for my friend’s Indian wedding next month, before settling on a lehenga” for SARI) that helps add ornamentation to some oft-seen fill, but not in a way that feels like it really adds anything to the clue but some bulk.

This was a fairly breezy solve, which was nice, but it didn’t satisfy as much as the last few weeks of the AVCX has.