Hafa Adai from Guam, where America’s day begins! A thousand thanks to Jenni for giving me a week off from blogging duties.

Clearly I’m still on island time because my solving time was very slow (and that’ll be my excuse for the next week)…and I needed help. There were a few phrases/words I’d never heard before and some tough crossings that got me.

But let’s start with the theme. 41d is DROP DEAD clued as [Utterly (gorgeous), and a hint to this puzzle’s theme]. Interesting that the entry is clued as a partial when “DROP DEAD!” is a perfectly cromulent phrase on its own. Anyhoo, we’re looking for phrases where the word “dead” has been removed. 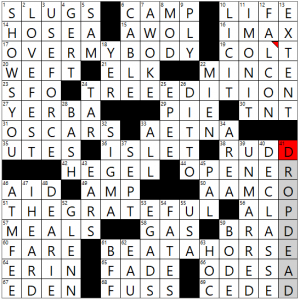 Overall this works, it’s just that I had issues with some of the cluing. Interesting to see an 8-letter revealer not alongside the other theme answers, but in the Down direction.

Those stacks of eight in the NW/SE corners, necessitated by the placement of the revealer, are impressive, but they aren’t without issue.

It was the upper right where I needed help. 10A [“That’s ___”] could have a number of options (I couldn’t get MINE or FINE) out of my head, and 10d seemed to want LEGIT. Didn’t remember FALCON from the Avengers movie nor the COLT players. But getting that L at the FALCON/COLT crossing helped me to break through. 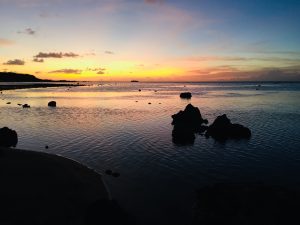 LOVEFEST makes for great fill. USE FORCE is strong as well.

I will leave you with UNMARRED [Pristine]. Guam is definitely marred in many places, but seeing a Guam sunset you can pretend, at least for a little while, that there is still some perfection in this world. 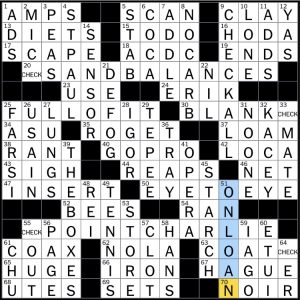 I like the Thursday NYT because there’s generally going to be something a little out of the ordinary going on.  That’s certainly the case with this Thursday’s puzzle, and while it’s not the most innovative Thursday I’ve seen, it’s a concept that’s well-executed, and that counts for a lot.

The revealer at 9D mentions that, along with 39D, we’re looking to “fulfill requirements…or how to fill four of this puzzle’s squares?”. That answer turns out to be CHECK ALL THE BOXES, and that’s exactly what needs to be done for four sets of answers to fit in the grid:

I’ll take a solidly executed rebus like this any time.  Plus, there was some lovely personality to the fill!  “YAS queen!”, clued as a “slangy affirmative”!  KACEY Musgraves, who rightly got the Grammy for Album of the Year for Golden Hour!  A kicky “Lightning Bolt” clue for USAIN! Long fill like FULL OF IT and EYE TO EYE!  This one CHECK(ed) ALL THE BOXES for me.

Crossword constructors notice things and file them away for future use. Peter noticed that two Wimbledon finalists had palindromic last names, found a relevant movie title with a palindromic last word, figured out that the letters worked out for grid symmetry, and created today’s theme. 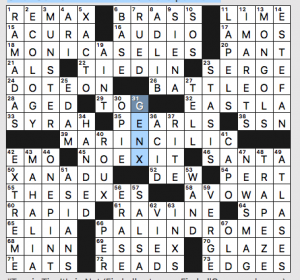 What I didn’t know before I did this puzzle: that XANADU was nominated for a Tony for Best Musical.

I leave you with The Queen.

THEME: Phrases that include bending body parts with the word GO over each.

Boy do I wish I read the whole revealer before just now. It makes it much more interesting and humorous, though I think the solve experience would be the same. I completely missed the fact that GO was atop each of the “benders.”

It also explains the extremely odd placement of the revealer. At 11 letters long, it could easily be put in the “correct” position where LEATHERNECK resides, but with the additional constraint of placing the letters G and O, I’m guessing it was too difficult to fill cleanly. That being said, it really threw me off- the revealer being where it was.

Nothing too bothersome fill-wise, which is impressive given the extra constructing challenge. I’ve been to SKAGWAY, but still had problems with that. LESAGE was new to me. A TAD crossing A GRIP is pretty yucky. And- ya’ know- OGEES. But all in all, just fine. 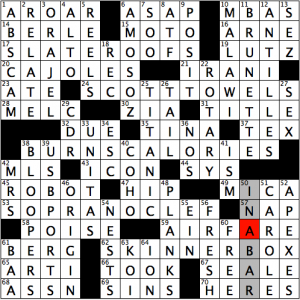 This week, BEQ delivers a plug for next month’s Boswords, a crossword tournament held in Boston. This year’s Boswords will be held on July 28th, and I’ll be going for the first time this year! Join me, won’t you?

Brendan’s “Boss Words” gives us five phrases that begin with the surname of a TV boss:

A solid theme — I liked that it took getting a few theme answers to figure out what the theme was. A bit of cheeky cluing: back-to-back answers clued as [Booty] were TAIL and SEX.

A couple tough crossings in this one, like the Z of AMOS OZ [Israeli author of “Elsewhere, Perhaps”] and ZIA [Pakistani president of the 1980s] as well as the C of MEL C [Sporty Spice] and CDR [Cracked copy of Photoshop 6.0 holder, maybe]. 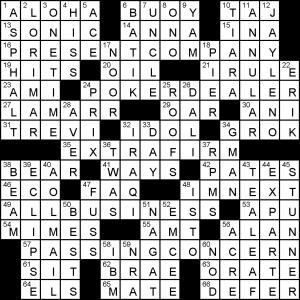 I appreciated the extra effort that went into the execution of this theme. The first layer of the theme is simply COMPANY, DEALER, FIRM, BUSINESS, CONCERN – five phrases end with synonyms for corporate entities. But the clues are also changed to be “?” style and describe a hypothetical type of organisation. Some of those clues are quite strained, and I can only assume All is an American brand of washing powder or similar.

Nines and fourteens in one puzzle make for an irregular grid design, but this seems to have been juggled quite well. The only really contrived answer was RPMS. AOLMAIL is an entry I haven’t encountered before, and since AOL isn’t really a thing here I was skeptical, but it does seem that is what there email is called. My mistake was LORIMeR/LeMARR – crossing proper names at dubious vowels is often my (our?) downfall.

What’s up with the American stereotype that MATE (and BUSH and UNI) are Australian-only words? Refer to British duo Right Said Fred’s You’re My Mate to find the English using it for example (but only if you’re very brave).