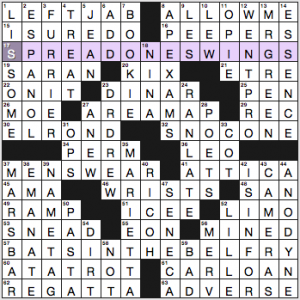 This one’s not a themeless puzzle—it’s got a mini-theme of two 15-letter entries (SPREAD ONE’S WINGS and BATS IN THE BELFRY) and the trio of flying bats drawn in black squares in the center of the grid. Luckily, the rest of the puzzle lives up to our expectations for themelesses, with such fill as LEFT JAB, “ALLOW ME,” ELROND, SNO-CONE, MENSWEAR, CAR LOAN, MARS BAR, DR DREW, A.P. EXAMS, WENT PRO, MR. GREEN from Clue(do), and the underused word ANODYNE.

It’s late because I was watching the second Dem debate tonight, and it’s time for a bedtime snack. So just three more things: 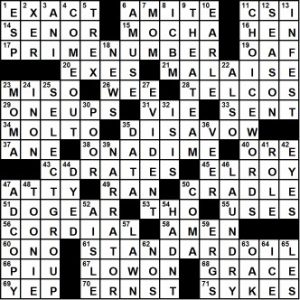 Nice theme to display in a pinwheel grid, allowing for good stuff elsewhere. Including MALAISE, ONE–UPS, DISAVOW, ON A DIME, CD RATES, DOG–EAR, AD COPY, COME OUT, NARRATOR, THE A-TEAM, and a couple other, shorter entries.

A Berry smooth Friday solve to ease us into the weekend. It was lots of fun to solve.

There’s no junk in the puzzle and not much of the “do you know this?” stuff that often annoys some of our commenters. The 10-letter stacks in the NW and SE are solid and fresh, and the whole thing flowed, as I said, smoothly. Let’s start with the NW: 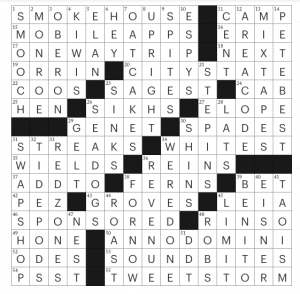 What I didn’t know before I did this puzzle: that there are four volumes of ODES by Horace.

It took me a while to hunt down all the theme answers in this puzzle. Thank heavens for symmetrical placement. It’s a fun theme!

The central entry tells us what to look for: 38a [Splitting with one’s group … or a hint to the theme found in four puzzle rows is BREAKING RANKS. Four of the rows have military ranks split across two answers. 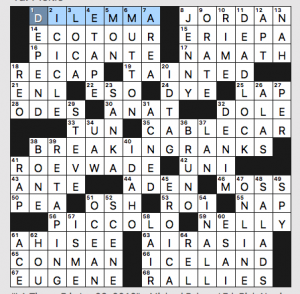 What I didn’t know before I did this puzzle: that Joe NAMATH  is the only Jet to ever be named Super Bowl MVP.