This will have to be quick (unlike my time). I have a lot going on today.

Theme: Common phrases have the first two letters detached to form an initialism.

I like the theme fine, but it felt uneven in execution.

Oh, I was surprised at 36d [Grand Canyon of the Pacific location] being KAUAI. Fun fact to learn, but of course the deepest part of any ocean is the Marianas Trench which has a crescent shape around the island of Guam (from which I write his post). Technically, this makes Mt Lamlam (which means “lightning”) on Guam, the tallest mountain in the world. Despite rising only 1300 feet above sea level, it’s still another 36,000 feet down to the bottom of the trench. Mt. Everest clocks in at a mere 29,000 feet. 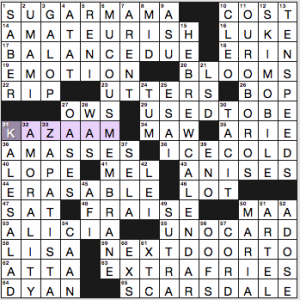 Anyone else find this to be of Friday-level difficulty? Despite needing the crossings to piece together 1-Across, and despite the grid’s two halves being connected only through those Down 14s, I filled it in soon enough.

Side note: Now, I’m sad that neither IDRIS nor ELBA is in this grid, because Kameron wrote the new Vanity Fair cover story, a profile of Idris Elba. (His day job, if you don’t know, is film critic.)

Fave fill: SUGAR MAMA, KAZAAM (raise your hand if you thought of the nonexistent Sinbad-as-genie movie Shazam here), EXTRA FRIES, ZAPATISTA, a smooth MUCOUS MEMBRANE (editorial note: mucous is an adjective, and it’s mucus you want if you mean the noun), the splendid word OUROBOROS, and old-school TEN-SPEEDS. Do they still sell many ten-speed bikes? They were de rigueur in my youth but seem to have vanished.

There was a surprising smattering of things I place in the crosswordese category: MAA, RENI, ARTEL. The plural OWS, ANISES (omg, even one is too many), and OOFS were awkward. Is GALOP crosswordese? I’m fairly confident I learned the word from crosswords and have rarely, if ever, encountered it elsewhere.

Did not know: 41a. [Country singer McDaniel], MEL. Probably he is better behaved than MEL Gibson. 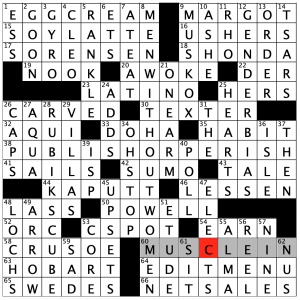 I have done a few of the puzzles on Christopher Adam’s website (you can find them here), and I like his style. I enjoyed this puzzle, even though I was able to plow through it. It has been a stressful last few weeks, so I did not even try the Downs Only rabbit hole, but it would have been tough. Maybe I will take the time to try that route on the upcoming day off this week! I am awaiting nice relaxing Thursday, and I will try to watch the Hot Dog Eating Contest, which I have missed the last year or two. Yes, it can be disgusting, but the announcer is hilarious and it actually makes me NOT want to eat, and I still need to lose 30 lbs!

I got off on a tangent. 4.5 stars from me for this fun puzzle. Lots to talk about, but I will narrow it down to ten items:

I think I will try my next LAT review with Downs Only again. See how poorly I do this upcoming Tuesday! 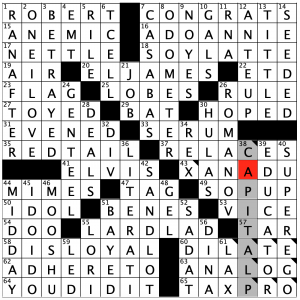 Lester Ruff was not “less rough” for me this week. As mentioned in my LAT review, it has been a little busy, and my brain feels a little fried. Also, this weekend, I am volunteering at the U.S. Senior Open, which is right here in my backyard at the golf course at Notre Dame. I am working the leaderboards, which for USGA events are still manually done, which I think is one of their iconic features. They also don’t allow professional male golfers to wear shorts when it is 90 degrees, while female golfers are allowed to wear shorts, skirts, skorts, sleeveless shirts, tank tops, and anything else to keep cool. After seeing how fit even the Senior Tour golfers are, this boggles my mind. This also relates to the answer in today’s LAT at 12D (see that review above). In summary: it has been more tiring than I thought it would be. I am getting old! Getting brutalized by this puzzle also didn’t help one bit. I need a nap. 4.6 stars for a tougher-than-usual puzzle by Stan himself.

Everyone have a wonderful weekend and a safe holiday week!

Smooth, cohesive puzzle with fun consistency in the theme. Anyone else have trouble with the spelling of BOUTONNIERE? Ha!

Also appreciated the wink Ross gave to his father with the clue for TOONS [Mike and Alex Doonesbury, e.g.].