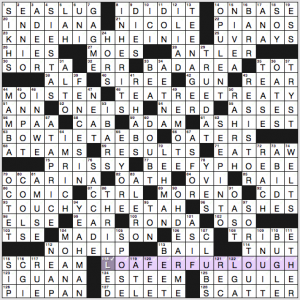 The theme is flipped homophones. A word or phrase’s two halves are swapped, and the spelling shifts to make the flipped version also a real word. The resulting goofy phrases are clued accordingly:

I liked the theme for being playful and posing some challenge to decipher.

Did not know: 21a. [Wife in F. Scott Fitzgerald’s “Tender Is the Night”], NICOLE. Never read it. Also did not know the 103a. [First letter of “tsar” in Russian] is TSE. I do not, in fact, know the Russian names of any letters.

Did know, because I used to be a medical editor: 76d. [Rapid movement of the eye from one point to another], SACCADE. 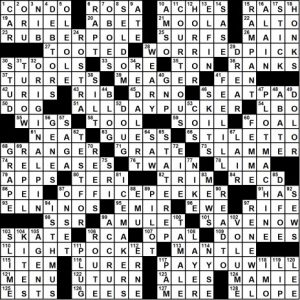 Think about the title, okay? Read it. Now, read it again. Got it? S TO P. So, with the title doubling as the reveal, take a look at the theme entries:

Gail is a pro, and this is a good and competently-constructed puzzle, with lots of good stuff accompanying the theme matter:

Hands up for ORE at 1-Across! 3 letters? [Mine find]. It’s a no-brainer, right? Wrong. Instead this puzzle turned out to be pretty “wild.”

THEME: Uncaged animals. Entries on the edge of the puzzle are one letter “too long” to fit, and the leftover letters spell out 16 different animals. 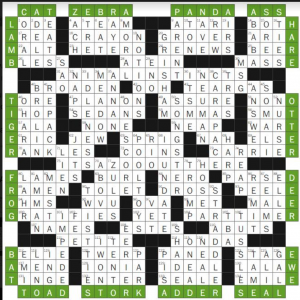 This puzzle was adorable. Quite possibly a nightmare to construct, but a wonderful payoff.

I grokked the theme very quickly after realizing that ORE and ADELE would not work in the NE. One glimpse at the title, and a note of the note that accompanies the puzzle (SOLVE ON PAPER!!!!), and I was more than willing to write letters off the grid. CAT and LAMB revealed themselves quickly, and as soon as I entered ZACH for 4-Down, I knew ZEBRA had to go across the top.

Sometimes, when the theme reveals itself a little too quickly, the puzzle gets boring. The opposite is true here. It was exciting to discover/infer all of the animals, and it is one of those themes where- once you get it- can aid with the fill. I especially loved the clue for 133A [Black Panthers co-founder Bobby whose name is a homophone of one of this puzzle’s featured creatures] because I was struggling with the SE. And SEALE helped me write in SEAL (though the hint in the clue was likely to help the solver determine Bobby’s last name as it’s more obscure…).

I finished the puzzle and was thinking about it while driving to work last night. Then this thought hit me: If I know a Birnholz puzzle, I bet all of the entries that were “too long” still work as acceptable crossword fill even without the extra letter. Sure enough. Check it out. ODE, EATS, REA, ALT, LESS, ORAL and DELE make up that NW corner. All acceptable fill. That must’ve been an exceptionally tall order, especially in the corners. RATIFIES / GRATIFIES is pretty awesome. RANKLES / ANKLES. CARRIE / CARRIER. I mean, c’mon. That’s great.

Thanks, Evan! You menageried to make that an exceptional puzzle.

THEME: Phrases where the second part can precede the word “Shot” 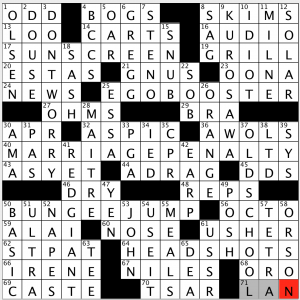 Fine, standard Universal puzzle. Played very easy for me, even with KUROSAWA in there (all crosses were more than fair).

I paused for a second after entering the revealer HEAD SHOTS. I was wondering why the “shot” word was last in the phrase when it seems like it should be at the “HEAD” of the phrase. But since those words all precede “shot,” it works. Still woulda been nice to see them at the heads of the entries.

3 Stars. Right over the plate.

I’m happy it’s cooled off enough here in eastern PA that I can write this out on the porch with a nice breeze keeping me comfortable. It’s a comfy theme, too – straightforward and accessible. The circles in each theme answer tell us what to look for. 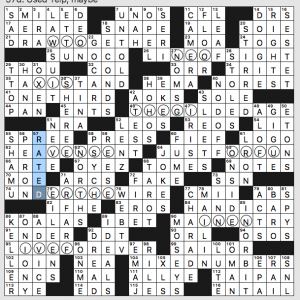 And 104a tells us what we’re looking at: [5½ and 8¾, e.g. … and a hint to this puzzle’s circles] is MIXED NUMBERS. See the anagrammed TWO, ONE, SIX, EIGHT, SEVEN, FOUR, THREE,  and NINE? Each number crosses two words, which is a nice lagniappe. All the theme answers are solidly in the language. A nice, breezy, Sunday theme.

What I didn’t know before I did this puzzle: that SUNOCO has been the official fuel of NASCAR since 2004.