Belly up to the bar for the first puzzle of July. Each theme entry has two sets of circles. 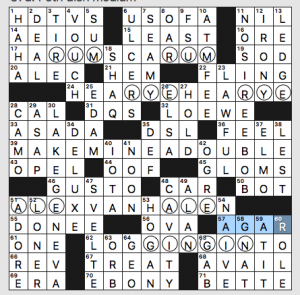 And the revealer in the middle tells us what we probably already know: 39a [Bar request … or hint to the letters in the circles] is MAKE MINE A DOUBLE. Nice Monday theme – solid, consistent, and accessible – although does anyone have a “double ale?” I don’t mean a doppelbock.

It’s a lot of theme material for a 15×15; the fill didn’t rub me the wrong way, which is impressive.

What I didn’t know before I did this puzzle: I only remember Eddie VAN HALEN. I knew he had a brother in the band but didn’t know his name was ALEX or that he played drums. 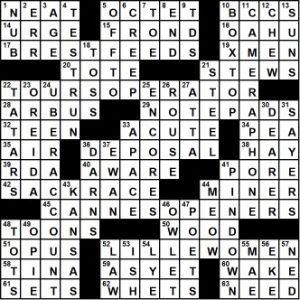 Seasoned vet Lynn Lempel steps up today with newbie Sara Nies to give us a clever, punny theme based on cities (sites) in France:

Other stuff I liked: 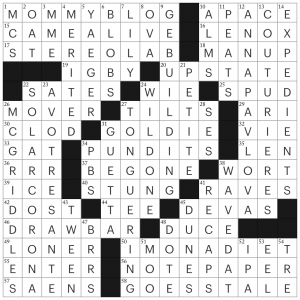 Let’s take a sec to look at how pretty that pattern of black squares in the grid is.  Okay, second over, let’s talk about the fill:

Hope you enjoyed solving this as much as I did!  ENTER STEREOLAB:

A seasonally appropriate theme celebrating the one place I’d rather be than here on my screened porch.

We have three starred answers plus a revealer. 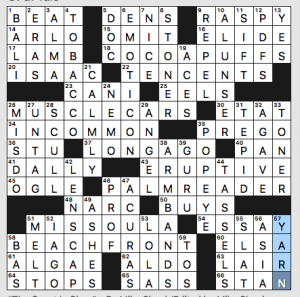 And the revealer at 58a: [Coastal strip of land, and a hint to the starts of the starred answers] is BEACHFRONT. COCOA BEACH, MUSCLE BEACH, and PALM BEACH. Very nice.

What I didn’t know before I did this puzzle: that Swee’Pea was POPEYE‘s adopted son.

I leave you with Gwen Verdon.