We’re looking for a famous American, on this Friday before the Fourth of July.

(Looking for a grid image? It’s below! No spoilers yet!)

Hoo-boy, this took some time, and many were the rabbit holes down which I and the Solid Puzzle Friends* ran — starting with the title: is the meta mechanism something to do with fourths? JAMAICA INN was Daphne du Maurier’s fourth novel; Howards End was EM FORSTER‘s fourth novel; but “The Bridge” was not HART CRANE‘s fourth book or poem, nor did EISENHOWER command the Fourth Army, nor could we figure out whether he was the fourth of something else.

One of our group had some thoughts about who could be the Fourth Man:

Geez! I saw CAIN in 17-A which got me thinking all old testament — SETH is the fourth man [ADAM -> CAIN & ABEL -> SETH]. With LENO at 62-A, I was thinking late night hosts and SETH MEYERS happens is the FOURTH host of the iteration of “LATE NIGHT w/” starting with Letterman. Tried to find a backsolve for SETH MEYERS, but got nowhere. Is he even famous enough, idk?

We figured it was likely connected to the upcoming July Fourth holiday:

Maybe a parsing of “Independence Day”? But the title is “The Fourth Man,” not “The Fourth, man,” so nevermind. Could still be 4th of July related, though.

Then we just messed around a bit:

Then we got close thinking about the final clue: [59d: Each of 15 in this grid]: ROW

The final clue struck me as odd. Made me want to pull one letter from each ROW to use to spell the name. How? I dunno! I quit after removing the F from FSTOP (which still left real words). Second line not as obvious a route. 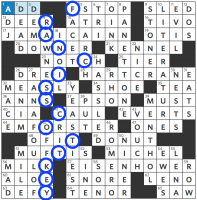 And, as is usual in the group solve process, a stray remark resulting from one person’s rabbit hole led to a breakthrough:

Hint 1 – Take one letter from each row is the correct mechanism.
Hint 2 – Look at the title to figure out which letter to use.

Ohhhhhh. He’s the fourth man because we’re taking the fourth letter in each row, all of which spell out

who is a famous American, and our answer.

Thoughts? One of our group was not particularly sanguine.

Besides being a total frustration, I’m not a fan of the mechanism. The entire right side of the grid is irrelevant. I mean, guy’s last name is spelled out right there in the SW! The appearance of 4 themers was a KILLER! I can see how an easier to parse title could make this WAY too easy, the mechanism being what it is. That said, excellent catch, [redacted]! I am INAWE (5)!

I, however, liked it, and would award the constructor the Francis Scott Key Key. And before you’re all, geez Laura you just plagiarized most of this post from your solving group’s group chat, rest assured that it is an homage to Francis Scott Key himself, who plagiarized the melody of “The Star-Spangled Banner” from a (rather bawdy) British drinking song, “To Anacreon in Heaven.” That song was the anthem of the Anacreontic Society, which, according to Wikipedia, “would meet on Wednesday evenings to combine musical appreciation with eating and drinking” — which sounds like a damn fine way to spend a Wednesday night, and likely how I’ll spend the Fourth this Thursday.