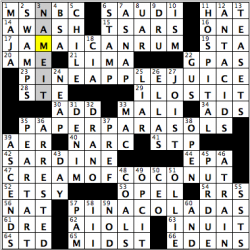 Good day, everybody! Hope you all had a good Canada Day on Monday and celebrated as only a wild and crazy party animal north of the border would! Here is hoping that you did so while having some PINA COLADAS, as ingredients that make up the look of the popular drink are the answers to the first four theme entries (57A: [Poolside drinks made with ingredients 1, 2, and 3]).

If you have ever taken the A TRAIN (46D: [Famous subway line on an Ellington song]) during rush hour before, something that I have done a countless number of times while growing up right next to the Euclid Avenue A train station in Brooklyn, you’ll know that you’ll definitely feel like a SARDINE more than on any other train in New York City (42A: [Packed-in subway rider, metaphorically]). Absolutely fitting those two entries were in the same grid!  Speaking of things I like in the grid, have to always give love when Africa is referenced, and today that comes in the form of MALI (33A: [Land bordering Algeria]).  Loved the long fill on the corners, though hoping all the food and drink in the grid, including PEAR TART (35D: [Pastry made with boscs or anjous]), doesn’t make people have to use some ANTACIDS (12D: [Heartburn remedies]). Honestly, the only things that were missing from this grid was the kitchen sink and a nude woman…oh, wait, there’s MAJA (1D: [Goya’s “La ____ Desnuda”]). Well, there’s still no sink!

“Sports will make you smarter” moment of the day: PURDUE (45D: [Indiana university)]) – For a good long while, Purdue University, located in the wonderful little town of West Lafayette, Ind., was known as the “cradle of quarterbacks.” Why? Well, to start, Pro Football Hall of Fame signal-callers and Super Bowl winners Len Dawson and Bob Griese, both at the peak of their professional powers in the late ’60s and ’70s, played collegiately at Purdue while former Pro Bowl quarterback Jim Everett and College Football Hall of Fame members Mark Herrmann and Mike Phipps also attended the school and played QB. However, all have been surpassed by the greatest quarterback who once donned the Boilermaker black and gold, current New Orleans Saints quarterback Drew Brees, who is the National Football League’s all-time leader in passing yards (74,437) and second in touchdown passes (520, just 19 behind Peyton Manning). 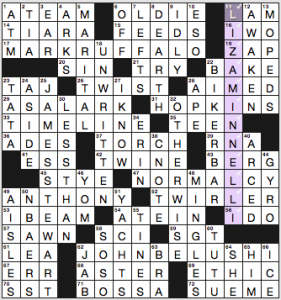 I’ll bet Peter has a list of other people who fit this category (although we’d want to rule out any whose characters shared the performer’s first name—see also: all the TV roles where Tony Danza played a Tony), and wonder if any women had the right letter counts and degree of fame to replace any of the men. I don’t ding a 4 men + 1 woman theme for not having all five the same gender, as that constraint would make for far too many all-dude themes and this is 2019.

Lots of nice fill in this 15×16 grid. To wit: The TWIST/TWIRLER/TWINE twio, BIKER BAR, UNWRITTEN, and some other longish fill that’s entirely unimpeachable if not exciting. Rather less keen on NBAERS, letter ESS, LEA clued as a [Grassy field] when I daresay few of us encounter that sense of the word outside crosswords, abbrevs SST and SGT. I usually dislike STYE but will excuse it this time because I have a story. Last week at the gym, my trainer said she had another client who, at the end of his session, rubbed his eye and said he thought he was getting a stye. Dude, don’t rub gym germs in your eye—this is how you pick up Staph infections!

Tuesday-easy, fairly smooth puzzle. I say this one did not Tuezz. 3.9 stars from me.

Who are we “Dropping Off” today? Let’s find out: 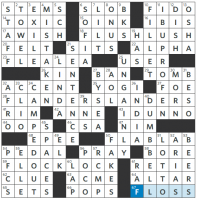 18A: FLUSH LUSH [One bingeing on Chateau Lafite?]
23A: FLEA LEA [Meadow that you shouldn’t walk your dog in?]
38A: FLANDERS LANDERS [Arrivals at Antwerp International Airport?]
50A: FLAB LAB [Dietary scientist’s workplace?]
59A: FLOCK LOCK [Sheepcote security feature?]

It turns out that there is quite the F LOSS in this puzzle: each theme entry has a first word that has its F drop off to form the second word. The theme struck me as consistent and tight, but the cluing wasn’t on my wavelength at all. I’ve never heard of Chateau Lafite or sheepcotes, so I needed the crossings to get a toehold into some of these themers. Otherwise, the fill felt quite clean (aside from bits like NIM).

Random thoughts:
– [Flower holders] seems off for STEMS. Maybe [Flower supports] would be better? I plunked vases into 1A at the start and it took me a bit to take it out of the grid.
– CSA :/
– [Bride’s destination] is a clue that has so much loaded into it. Why not [Husband’s destination]? Could it be the social assumption that women are expected to get married and that doing so is part of their expected path through life? Having a woman anywhere in the pipeline of this puzzle’s development might have resulted in a better clue for ALTAR.
– Thankfully, we have a few women recognized for their accomplishments: Queen ANNE, CLIO, and LINDA Ronstadt. But why not clue SOFIA through the context of a woman with that name? 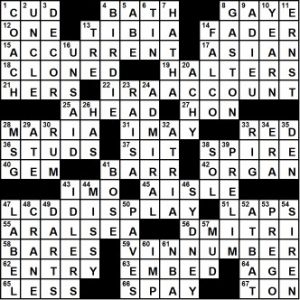 Ken Albright’s Universal Crossword, “You Can Say That Again”–7/2/19, solution

Not much else to comment on, positive or negative. Clever idea, though. And competently rendered. 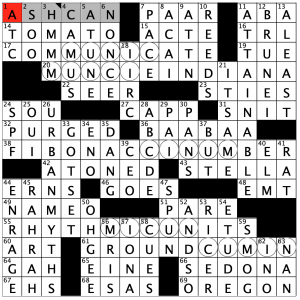 As Matt churns out a seemingly endless number of puzzle theme ideas, I can imagine him in the kitchen preparing a recipe, which undoubtedly contained a certain spice:

Cleanly done. All are different anagrams of CUMIN, and now I am getting hungry! Sorry for the late post, but it has been a busy couple of days. Those holiday weeks!  A solid 4.5 stars for Matt this week.

It is late in the day Tuesday; I think I am going to bed soon! Here’s some music to enjoy: 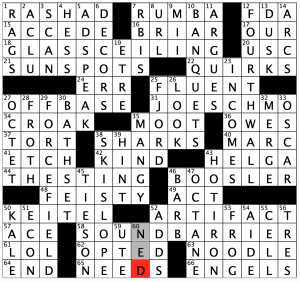 I am getting to the blog post late today, and now I am a little sad that I am, because this may be a debut puzzle by Emily Ludolph. Her name is not in the comprehensive name database used to tag these posts, so if this is in fact a debut, congrats! Knowing Jeff as I do, he is great with working with constructors. We have even been kicking a few ideas around, so who knows when our collaborations will see the light of day. But enough about me!

Today’s LAT is all about invisible things, which are tied together in the clues:

I would call this a timely theme, since between the US Women’s soccer team poised for another World Cup victory, and with several highly capable females vying for the presidency, the GLASS CEILING looks like it is in serious threat. Time will tell, but I enjoyed this puzzle. Looking forward to more from both of these folks! 4.3 stars.

Congrats again! And enjoy the day off later this week!