Your usual correspondent Joon is still in France with his family watching the Women’s World Cup, so Laura is subbing this week and last week with the collaboration of various folks.

This week’s contest answer is a 5-letter word. 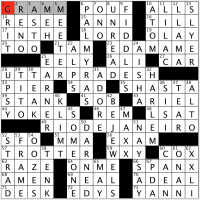 There do not seem to be any stand-out themers, although we’ve got UTTAR PRADESH and RIO DE JANEIRO as long entries, and they’re both geographic areas. There are lots of entries with doubled letters, tho:

Some of these words make new words when you eliminate one doubled letter (on the principle of Oreo Double Stuf having only one F) and some don’t:

If you write out the doubled letters singly, nonsense: MLENLOETMTNLEDOXX

If you eliminate the doubled letters, and write out what’s left in those entries, gibberish: GRAASRESEAITITLY etc

Are there other entries/clues that could correspond with those? Or with the double-letter words?

[Here’s where I sent up a beacon for help … and was rescued by a friend who requested anonymity but gave me the tiniest nudge.]

Wwhhooaa! MAXXXXLI! or … XXLIMAXX! MALI and LIMA are both places, like RIO or UTTAR PRADESH … I sense a breakthrough. Wonder if we can make new words with the other paired entries, particularly the ones with “bookended” double letters?

As frequent crossword solvers are quite aware, the entry for a clue like [28a: The Taj Mahal is there] is more often AGRA, but in this grid, the entry is UTTAR PRADESH (AGRA’s state). Are there other clues that could also be satisfied by the double-letter-bookend-generated words?

Wwheww. Definitely a satisfying conclusion to the solve, tho the final result felt a little shaky. Your thoughts?