Anneyeonghaseyo, from Seoul! I’m coming at ya from Incheon Airport and I’m pretty wiped after my red-eye from Guam, so this will be brief.

Our Independence Day-themed puzzle has the THIRTEE(N C)OLONIES hidden around the grid represented by their two-letter postal code in rebus form. 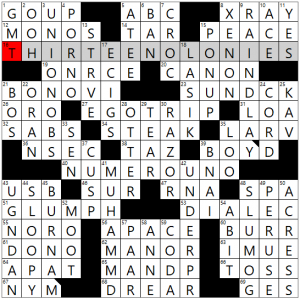 In addition to North Carolina hidden above, we have:

I’ll admit to having a tough time with this. Maybe it’s partially to do with my current condition, and partly because I’m not used to using Across Lite and I could remember how to enter rebus entries, but my sense is that this was pretty tough. Entries like KAVA, ORAN, and multiple obscure (to me) proper names got me. And I bet the crossing of proper names BURNHAM and DON HO was tough for some as well.

But, I did like the theme and the challenging aspect of it. I just wish it was a little smoother.

I wish I could do this puzzle better justice, but I’m about to lose my wi-fi and I have to cut it short. Challenging puzzle but some thorny bits made it fairly difficult 3.4 stars. 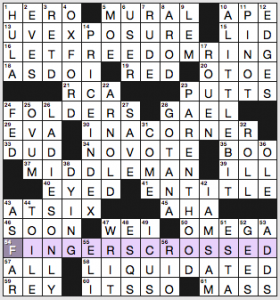 The theme in this 14×15 puzzle is 54a. [“Here’s hoping” … or a hint to 16-Across/10-Down and 37-Across/14-Down], FINGERS CROSSED, and the parts of those crossing long answers that are names of fingers intersect. “LET FREEDOM RING” makes you think it’s an early Independence Day theme, but no. That RING finger crosses the pinky in A LITTLE BIT. (I have never called the pinky the “little finger.” Littlefinger is the nickname of Petyr Baelish on Game of Thrones.) PRICE INDEX crosses MIDDLEMAN for your index and middle fingers.

I like the concept, but the LITTLE and MIDDLE phrases hinge in the same meanings of the words that are used in those finger names, while RING is distinctly different and INDEX is probably different.

I finished the whole puzzle without paying the slightest attention to what the theme was, as understanding the theme was entirely unnecessary to filling in the grid. This makes for an unsatisfying solve unless the rest of the clues and fill make up for it. And from RETD in the top left corner to plural abbrev ESQS (please tell me the pronunciation for that one), crosswordese abbrev LEM, awkward IT’S SO and AS DO I, terrible GOT AN A, and arbitrary AT SIX, I was distracted from noticing the nicer long fill, like PARENTHOOD and UV EXPOSURE.

Barely have any recollection of learning from crosswords, or from anything else: 29a. [Old-time actress Le Gallienne], EVA. Just looked at her Wikipedia bio to see how “old-time” she was (heyday in the 1920s, cover of Time magazine in 1929, got an Oscar nomination in 1980), and was fascinated by the “life and career” section. Lots of lesbian relationship intrigue, and she helped launch Peter Falk’s career. All right, I forgive the obscure clue angle for prompting me to learn about a neat person. 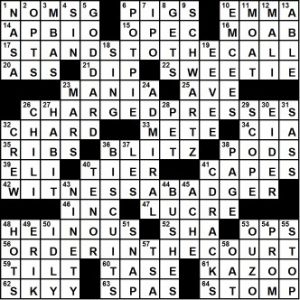 A decade ago, Ben became the youngest person ever to have a crossword in the New York Times. Biographically, I have lost track of him since then–i.e., don’t know if he is in law school or what. But he’s created a puzzle after my own heart.

Clever! A disordered phrase that I have heard twice in my 22 years on the bench is “I just want to throw my mercy on the court.” I was caught off-guard the first time, in the late ’90s. But when it came again, in the early ’00s, I was ready and replied so as to complete a couplet: “Well, throw a lot, we’re a little bit short.” (Yup, it went right over the defendant’s head.)

Other good stuff from the puzzle at bar:

To say nothing of just a super-clean fill from NW to SE! Great job! 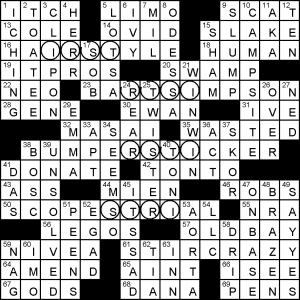 Yet another scrambled hidden word theme, though the execution was certainly above average. STIRCRAZY is a colourful idiom, and we simply rearrange STIR crazily four times in two-part phrases. The revealer would have been equally as apt if we had “stirred” crazy (or a synonym thereof, since crazy’s letterbank is not amenable to such themes). The phrases are varied and interesting too: HAIRSTYLE, BARTSIMPSON, BUMPERSTICKER and the notorious SCOPESTRIAL.

The rest of the puzzle felt very Monday in design. Very safely and cleanly constructed, with little outlandish fill except for the dubious ITPROS and the excellent WINWIN. 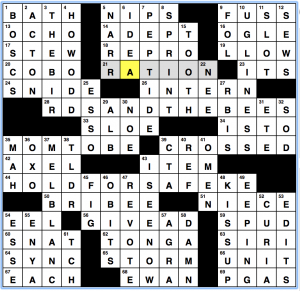 a
I got slightly distracted while solving Ben Tausig’s puzzle for the AVCX, but only because I was interpreting the theme clues as cryptic indicators rather than what else was going on.  Each of its clues “flex”es and makes an L-shape:

The symmetry of the theme entries in the grid is the cherry on top of this grid – it feels elegant and adds to a well-executed theme.

Solange (above) is Beyonce’s sister, which makes Blue Ivy her NIECE

Have a happy Fourth, all!