Note: No WSJ today due to the holiday.

This is not my favorite Fireball. This may be my least favorite Fireball despite the fact that it’s much harder than the recent run of non-contest puzzles. I like Schrödinger puzzles as much as the next person; this is not really a Schrödinger puzzle because only one of the multiple possible solutions is correct, and in order to figure out which one is correct, we have to do math with Roman numerals. I don’t like puzzles in a puzzle; I specifically don’t like math puzzles with word puzzles; I don’t like cutesy or clever Roman numeral clues (and would be perfectly happy if Roman numerals never again appeared in a crossword). So this is not a puzzle for me. 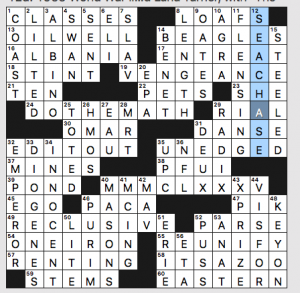 What am I talking about? This themeless has a kinda, sorta theme. I guess it’s a “minitheme.” 24a is [“Figure it out” (and an instruction to someone hoping to finish this puzzle correctly] and the answer is DO THE MATH. 40a is [A multiple of XIII] – that’s the math we have to do. I ignored the math and tried to fill it in by crossings, but it turns out that several of the crossings have multiple correct answers.

I solved it by brute force – I just ran the possibilities until I got Mr. Happy Pencil. 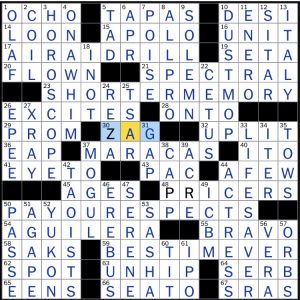 I was pleasantly surprised to find that today’s NYT wasn’t some sort of Independence Day tie-in.  I had prepared myself for the lowest of bars (as holiday-specific themes has an unfortunate tendency of going for timeliness over quality) and this was a nice brainteaser that made me think.

There was no revealer in the puzzle, just a general sense that you needed to be “concise”:

Each theme answer has the property where each word in the answer phrase starts with the last letter of the word that came before it, allowing AIR RAID DRILL, SHORT TERM MEMORY, PAY YOUR RESPECTS, and BEST TIME EVER to compress into the forms seen above.  I can’t say this theme EXCITES me, but the core entries are selected well and there’s some crunchy fill (like SPECTRAL, MARACAS, AGUILERA, HOROSCOPE, and LIFE SAVER) to provide some texture and interest.

Have a glorious Fourth of July! 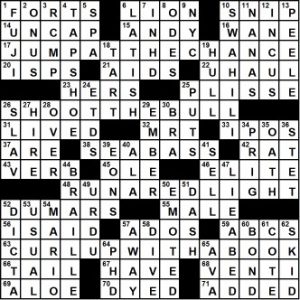 Deb Shatten finished 166th at the 2019 ACPT, but I cannot find any previously published crosswords by her. So, perhaps this is a debut. It’s a nice one. Grats, Deb.

The title foreshadows something fairly obvious … and it’s not Independence Day, but rather Olympic game, not Olympic Games:

With horizontal theme fill of 15-12-12-15, there will not be much to write home about in the rest of the Across answers. SEA BASS is nice; UNCAPS, ISPS, IPOS, ABCS, ADOS, and I SAID not so much. In the Down arena, I like TAPSHOE, SWAHILI, BRAILLE, and LIE-ABED.

Consistency in the cluing scheme is good, as is having all present-tense verbs. 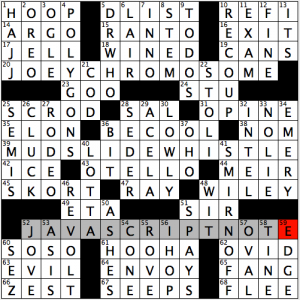 As someone who solved this puzzle shortly after his second coffee of the day, this puzzle’s title really spoke to me.

Here, everyday phrases get a synonym for coffee tacked onto the front, to wacky effect. Like so:

Three well chosen theme answers. I’m having a hard time coming up with any other synonyms for coffee that are nearly as common as these. Maybe “dirt”? 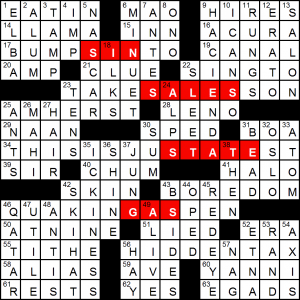 I’m not sure what is especially inequitous about a HIDDENTAX, but “___ tax” words can be found across four entries today. Only QUAKINGASPEN is really a word you’d try to include in a crossword puzzle. TAKESALESSON is rather arbitrary, BUMPSINTO bland, and THISISJUSTATEST is not the standard phrasing – that is “this is only a test”. I’m guessing GASTAX is the same as our fuel levy.