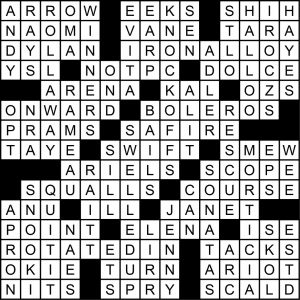 Title: “Follow the Directions!”
Prompt: The meta for this puzzle is a famous rock-and-roll song.
Answer: ???

Well it’s 54 minutes before the deadline and I got nothin’, so let me try Joon’s method of blogging the DNF and seeing if you can turn it into a last-minute save. The first couple of steps were pretty easy but I can’t suss out what I assume is the last step.

First thing you do is notice that the word “direction” appears in eleven clues, all acrosses. Their answers, in grid order, are:

Next thing to notice is that each of those contains a one- or two-letter abbreviation for a direction:

This can’t be chance, since each of these contains exactly one direction, i.e. there are no unused E’s, S’s, N’s, or W’s anywhere. I also noticed that each of the eight main points on the compass is represented at least once in these eleven entries, with two extra N’s and one extra S left over. Could mean something, or could be that Pete just wanted to confirm that we’re on the correct path.

So now what? Well, the first things you’d think of don’t lead anywhere:

*** Going in the indicated direction from each direction letter doesn’t do anything: west from the W in ARROW yields an O, then NE from the NE in VANE yields… and a black square? And then north from the N in DYLAN is an I, and then E from the E in DOLCE takes you out of the grid, so this isn’t it.

*** Next I noticed the curious entry at 47-A: [___START (“Arrested Development” license plate)]. It’s been a while, so I had to go back and read about Toby wanting “a new start” in life and signaling this with a vanity tag that says ANUSTART, without realizing that it can be read another way. So the odd thing here is that we have the word START in all capital letters, which I’d give an 85% chance of being a signal from Pete that we’re supposed to start there. I’d give it higher, but there’s also a chance that he needed the entry ANU there for some meta-related reason and didn’t realize that he’d left the letters START there as a nasty red herring. Now that I’m typing this out, let me up that to 90%+ that this is where we’re supposed to start. There aren’t any other words in all caps except NYC in another clue, so this big START looks like a big hint.

But now what? If we start at the A in ANU, say, and go west (as indicated by the W in ARROW), we are already off the grid. Not promising. Starting at the N or the U don’t yield anything either. Hmmm.

At this point I drew a little schematic on a graph showing what it would look like if we started at a certain letter in the grid and followed the 11 directions in order. Turns out it is a pattern with a lot of repeated letters — I theorized that we might be looking for a 12-letter song where the 3rd, 8th, 10th, and 12th letters were the same, as were the 4th, 7th, and 9th. Plugging this into a search I found THE WAY WE WERE. Now I wouldn’t call this a “rock and roll’ song per se, but it does have “way” in it (which fits with the direction idea) and it’s weird that all those letters mostly fit, plus WAY is in 3-D. I don’t have time to type up my findings now since I’ve got 30 minutes left, but long story short it turns out the R in “The Way We Were” wouldn’t work (which is fatal) and there’d be two W’s (which isn’t fatal but would be a little inelegant. Anyway I couldn’t locate the right constellation of letters in the grid to make this theory fit but weird that it’s so close.

Anyhoo…my Hail Mary is going to be Fleetwood Mac’s “Go Your Own Way” since there would be twelve letters in the song (from the twelve points of starting on a letter and taking eleven steps), but I don’t think it’s right since, even though Pete’s a big fan of theirs, there’s no G in the grid so I’m not sure where we’d get that from.

OK, it’s 13 minutes before the deadline and I submitted Peter Frampton’s “Show Me the Way” with maybe 5% confidence. I think the song title is probably 12 letters long for the reason stated above, and it would have some connections to “directions,” and I suspect Pete is a Frampton fan. The G-lessness of the grid nudged me away from “Go Your Own Way” as explained above.

Someone let me know in comments what the idea was!