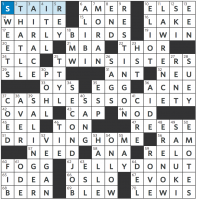 We’re looking for a famous writer. There are five long themers:

Plus there are two long downs that seem relevant, if we’re looking for a famous writer:

… and that’s what broke it open for me: why on earth would you clue SALINGER re Pierre and not the far more famous J.D.? (Bunch of phonies…) (Fun fact: J.D. Salinger lived, during his later years, in a town just down the road from where I live, and he used to come into the library where I work to use the copier.)

Put those guys in grid number order and you get:

Which WELLS? From the title, we know He’s Good.

Very nice, and intricately plotted, given that M.?. Gaffney needed to find five authors who are commonly known by the initials of their first and middle names, which initials could be used to lead five reasonably common phrases, and who could be clued in ways not referring to their names, all adding up acrostically to make another author who is commonly known by his initials.

Another charming anecdote that may explain why this theme was in my wheelhouse: In grad school, I asked a friend what he was reading, and he said, “Women in Love, by D.H. Lawrence.” Me: “Hey what does D.H. stand for, anyway?” Friend: “Designated Hitter, of course.” From thence we had running joke to find the most ridiculous expansion of any author who went by their initials: Twisted Sister Eliot, Egg Beater White, Computer Science Lewis, etc.

“Because they got more stories than J.D’s got Salinger —
I hold the title and you are the challenger.”