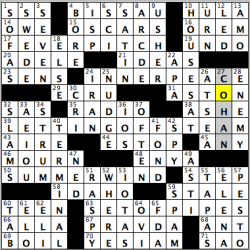 Hello there, everyone! First and foremost, let’s all wish the elegant and eloquent Elizabeth a very Happy (belated) Birthday, as her born day was yesterday!!

Hope all is well and hope you’re all about some word association with your theme entries for today’s grid to start off this blog. The first four theme entries end with a word that also can come before the word “pipe,” and the fifth theme entry, SET OF PIPES, acts as the reveal (63A: [Opera singer’s assets…or a hint to the puzzle theme]).

This grid took us around the world a little bit, with SWEDE (2D: [Native of Stockholm]), IRAN (24D: [Pearl Palace setting]) and, my personal favorite, BISSAU included (4A: [Guinea-_____ (West African nation)]). In a way, there’s some Russian that’s intersecting, with PRAVDA (67A: [Russian newspaper name that means “truth”]) connecting with OVI, if in the event you reimagined the latter as the nickname of, arguably, the best National Hockey League player to ever play in the league who hailed from Russia, Alexander Ovechkin (64D: [Egg (Pref.)]). There’s been an entry or two in the past few Gorski grids for this series that have left me AT SEA and totally hit a blind spot in my general knowledge, but can’t say that was the case for today’s solve (26D: [Confused]). Hope I was not a BORE (4D: [Bloviating windbag]) with this section of the blog, but I’m sure that nothing about the next graph will be boring because it involves one of our favorite people in the crossword world…and just one fine individual in general!

“Sports will make you smarter” moment of the day: ELENA (56D: [Colleague of Ruth and Samuel]) – One of the top basketball players in the world, 2015 WNBA Most Valuable Player and 2016 Olympic gold medalist Elena Delle Donne currently plays as a guard/forward for the Washington Mystics of the WNBA. Originally from Wilmington, Del., Delle Donne, who was the No. 1 recruit in the country out of high school, backed off of her initial commitment to attend the University of Connecticut in 2008 and headed to the University of Delaware to play volleyball and basketball, mainly done to stay close to her older sister, Lizzie, who has cerebral palsy and autism, and was born blind and deaf. (She also is not able to speak. Video detailing their bond can be accessed here.) Delle Donne is a five-time WNBA All-Star and, if you all remember, is the person whose jersey was worn by our Erik Agard while solving the final puzzle during his triumphant 2018 ACPT performance! 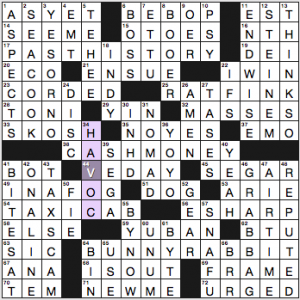 The theme is redundant phrases/words:

The theme is solid, but there’s no reason to make a Tuesday grid with stacked 7s in all four corners. You just end up with too much subpar fill: SEA COOK (that’s a thing??), not commonly known OTOES crossing OER ETTU PSY, EST NTH DEI crossing ENDWISE, name I learned from crosswords SEGAR, E SHARP, awkward-as-heck BITES AT, ON A LINE, TEHEE, and YUBAN (is that a regional brand of instant coffee?).

As an 80’s/90’s kid, I am firmly a mall rat (my husband and I have enjoyed exploring the remaining older malls in the LA area before they each get converted into the newer, fancier, decidedly not DOWN HOME malls), so I was excited to see “Chain Store” as the title for this grid. Where are the good deals in this mall? 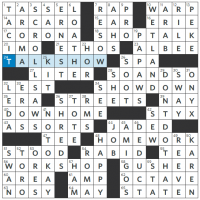 Well, it turns out that there’s a good deal … of connectivity between the themers. :D Each themer is a compound word/phrase whose second word/half is the first word/half in the next one. Not bad at all. It’s not the newest theme, but this puzzle is a solid representation of type. The biggest challenge for me in sussing out this theme set was deciding which ones were two-word phrases and which are compound nouns.

Other random thoughts:
– I can never remember if words like 1A are TASSEL or tassle. My solve times would improve so much if I could just get that down!
– Which women do we have represented in the grid today? Queen Latifah and KAREN Allen (both referenced with respect to their accomplishments), Mother’s Day, SHE, and LEDA and Aphrodite (but clued with respect to the men they birthed). Not bad, but ARCARO, ALBEE, Charon, ERNEST Hemingway, Santa, Castor and Pollux, AMIGOS, Pharrell, and Christopher REEVE make this grid ultimately tilt more male-heavy in representation.
– New to me: [Jockey who rode two Triple Crown winners] = ARCARO. Sports is already a rough subject for me, but horse racing is the next level of ???? for me. I feel like I’m getting a very clear picture of all the things I should improve on to up my solving speed. : ) Also, PEKE is a type of [Short-legged dog] that I hadn’t heard of before this puzzle.
– Potential dupe: RESOW / SEW? Or does that not count? I guess I didn’t realize before that you sow seeds but you sew buttons. I feel so bad for people learning English as a non-primary language! 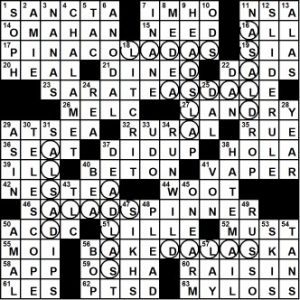 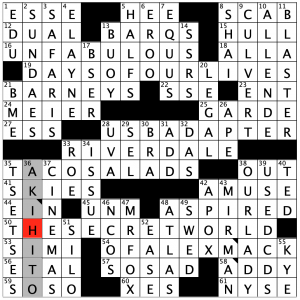 Lots of great entries in the Jonesin’ this week, as well as some interesting trivia in the theme answers, which delve into a theme I’ll bet you didn’t give much thought to before. At least I didn’t!

I said it was a lot of interesting trivia. I am sure there are other examples of this, but I think most TV shows are either in an actual town or are modeled to resemble New York. (Gotham City comes to mind, or Metropolis.) I liked this theme, because it made me think and also invoked some nice memories. 4.4 stars.

Another Jonesin’ coming next week! Matt is closing in on 1,000 of these in a year or so. Amazing! 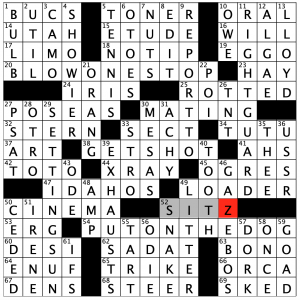 Another collaboration from Gail and Bruce, and I will go ahead and say it: this puzzle has gone to the dogs!

So we are referencing the phrases top dog, hot dog, guard dog, and sun dog. I will admit: I was not familiar with what a “sun dog” was, so I looked it up, and it is quite interesting. In short, it is a type of sun halo. Nicely done! Perhaps we don’t see these in Michiana where I am from, unless perhaps we go and see a sunset on Lake Michigan, which I haven’t done in decades. I will have to call my sister and we will make a trip! 4.4 stars for this dog-eat-dog puzzle.